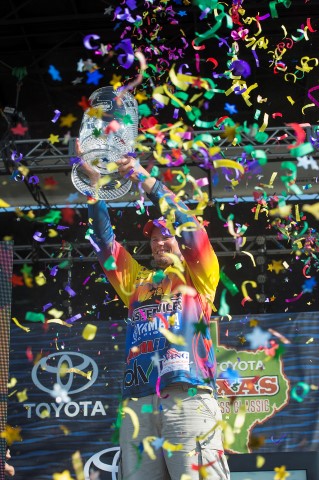 QUITMAN, TX (May 11, 2014) – The world championship of bass fishing, the Toyota Texas Bass Classic was decided by a world record-breaking performance from two-time winner and defending TTBC Champion Keith Combs of Huntington, Texas. Combs broke the tour-level world record today with a amassing 110 pounds following three days of competition at historic Lake Fork. The previous record for a 5-bass-limit was set in 2000 at Clear Lake, California by Byron Velvick with 83 pounds, 5 ounces. Combs’ total over three days broke the record by a staggering 26 pounds, 11 ounces.

“To get 100 pounds in four days is a major accomplishment, and to do it in three is unheard of, it’s nothing about the angler but it’s a testament to this lake,” Combs said. “I wasn’t the only one here to crack 100 pounds on 15 bass, so that just tells you how strong and how well-managed this lake is.”

After standout performances from Combs in the first two days of TTBC competition, he entered Sunday with a four pound lead, however Stetson Blaylock, Russ Lane, Jason Christie and Randy Haynes overtook him and the lead spot saw multiple anglers in first place during an early morning flurry of big catches.

Lane was the first pro to top 90 pounds, tallying 96, which was then quickly topped by Blaylock with a 93 while Combs sat at 88 pounds. Justin Lucas was the sixth pro to top 80 while Mark Rose added a couple weighers around 10 a.m. By noon, the top seven of the Tundra Ten were within 10 pounds.

As wind picked up around the noon, the big six, seven and eight pounders that Lake Fork is famous for, started to show up. Combs bounced through several spots producing four or more catches at each.

“Midday, I got into a little rhythm but was only catching one fish per spot. I’d run, catch one, run again, catch one. I told my onboard judge, ‘I’m feeling it,’ and I got a little groove on,” said Combs. “I said to my judge, ‘It’s happening for me right now.'”

Combs was on track to collect his second Century Bag (100+lbs) of his eight year career, recording 102 pounds and regaining the lead with an 8-8 (over 24 inches) in the afternoon. Blaylock made a late afternoon run with catches at 7-8, 4-8 and 5-12 within five minutes of each other, earning him the first Century Bag of his young professional career but it proved not enough to catch Combs. Blaylock finished second at 102 pounds, 8 ounces.

“You really never know what you’re going to catch. Every time I set the hook today, I thought it was going to be a 10 pounder,” said Combs. “In your mind, there’s no doubt of the potential Lake Fork has on any cast. There aren’t many places we fish on the pro tours where that happens.”

The tournament remains a non-entry fee event, with all 50 competing anglers taking home guaranteed prize money. In addition, the TTBC continued its focus on conservation and adhere to strict catch, weigh and immediate release format that has earned the event national praise for its conservation efforts over the past eight years. The program highlights the efforts of Texas Parks & Wildlife Department and after a $250,000 contribution this weekend, TTBC has given $2 million in donations to the Texas Parks & Wildlife Department to fund youth education and outreach programs.