Fish Murder? – Are Bass More than a Resource? 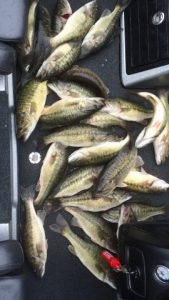 Scene of a crime in Alabama? It is if you ask most bass anglers.

Nothing seems to draw the ire of the everyday bass angler more than a stringer of dead bass, a photo of a trophy largemouth taken indoors or a group of bass photographed laying on the floor of a boat.

From the discussions and comments made on message boards and social media each time an angler posts one of these types of images, one would think that a person walked into their home, kicked their puppy, smacked their spouse, spit on their children, stole their fishing equipment and walked out the door.

This is not going to be a popular sentiment coming from anyone in the industry, but I really have to say – so what?

Recently, a team tournament angler fishing in the state of Alabama who was fishing with two friends – in a state with a 10 fish individual bag limit for black bass – posted a picture of 27 bass laying on the floor of his bass boat.  All of the fish were alive, they had been taken from his livewell, laid on the carpet for a picture and then released.

The social media world erupted with offense.  The amount of vitriol and hatred that was posted, followed by the bombardment of the tournament organization they compete in was immense.  The volume of the incoming deluge took more time for representatives of the organization to deal with than they spent working on the details and planning of their upcoming event.

I understand the feeling of anglers who are passionate about their sport and its resources because I am myself a bass angler.  I recognize the need to be protective of the black bass population if we want to have a long

term, sustainable resource that is the black bass.  However, the response an image like this generates is one of uninformed dogma; without a basis in science, understanding of the laws or even common sense.

I have spent much of my fishing career around very popular fisheries.  Many of them are among the most heavily pressured in the country.  Bodies of water like the California Delta, Clear Lake and Guntersville receive what would seem to be an insurmountable volume of anglers on a daily basis; and that is without a tournament coming to town. 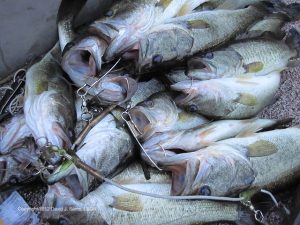 Is this the scene of a Mass Murder?

In my early career, I did a story for a publication called West Coast Bass News on the topic of sightfishing.  One of the sidebar items to the story was an interview with Dennis Lee, then California’s chief fisheries biologist.  I asked him if fishing during the spawn had a negative impact on the sustainability of a bass fishery.

His response was that it might have an immediate impact, but in the long run, the bass population was not going to be affected greatly.  His reasons came from studies that were done by the State of California Fish and Game Department that found that one successfully spawned (their scientific word for that is recruitment) female would produce enough fry to populate that entire cove for seasons to come.  He also went so far as to say that no angler, or group of anglers could ever fish an area of a lake out of its black bass population.

Armed with an understanding of a scientist’s view of the ability of a black bass to procreate, I deduced that sightfishing as a practice can have little effect on the overall health of a fishery; therefore, it is not something that needs to be regulated against.

The Legal View
One of the charges of state departments of natural resources – fish and game departments – is to evaluate the sustainability of a resource against the needs of the populace in setting bag limits. As biologists, those individuals must take into account the ability of a species of fish to sustain its own population when setting the amount of fish that an angler –any licensed angler – can legally keep for their own purposes on any given day.  In California, where I came from originally, the bag limit for black bass is generally five fish over 12 inches long; with a few exceptions.  In the state of Alabama that bag limit is set at 10 fish of keeper size; which can vary by species and body of water.

With that in mind, a game fish of legal size becomes the property of the angler who caught it, and as that person’s property, may be used for their own purposes; short of selling for profit as that is not allowed by law. 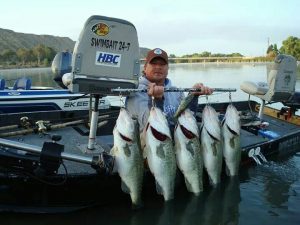 Is Butch Brown a Bad Person Because He Holds fish on a Stringer for Pictures?

If that person wishes to catch 10 black bass a day in Alabama, or five fish a day in California and collect them for a fish fry in two weeks, then that is their right –under the law.  If that same person wants to catch their daily limit for a month to have a massive display of skin mount taxidermy created for his home, then he has that right.  If that angler wants to catch his daily limit and then take them home to use as fertilizer for his garden – he has that right.

The Common Sense View
In many areas of life, people tend to see things through the rose colored lenses of their passion.  In bass fishing, the kind of passion that courses the veins of hardcore anglers often fills them with the courage to speak without common sense.

The amount of fish in a body of water like Clear Lake, Guntersville or the California Delta can likely be impacted very little by even a large group of anglers.  For every one that is killed or eaten, there are dozens more that will likely die without ever seeing a hook penetrate their mouths.

Anglers speak of things like Umbrella Rigs, or meat fishermen causing lakes to go through downturns.  However, I believe that the lakes are not what goes through the downturn, rather the angler’s ability to consistently catch them has. 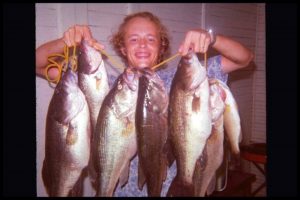 This Must be the work of a Serial Killer

The California Delta has long been a place where it took 25 to 40-pound limits to win springtime tournaments, and 20 pounds a day to cash a check.  But, in 2009 to 2011, the weights that it took to get checks began to slip into the teens.  Naturally, people began to say that the fishery was “off,” and that they must be getting fished out, or the environmental conditions were killing them off.  However, as things progressed, the weights began to climb again, and things got back to “normal.”  The word on the street about Guntersville right now is similar.  The lake is in a downturn, the pressure is getting to it, and the fish are all dying or being eaten.

What I believe the truth is that the anglers in those situations refuse to adapt to the fish changing to avoid the fishing pressure in the locations they have been frequenting. The angler’s stubbornness and inflexibility keeps them fishing where their minds tell them the fish have been, and instead of remaining flexible and reconnecting with the fish, they stumble through long periods of fishing where they caught fish in the past, hoping to get the kinds of bites they had before.

After a long while has passed, the anglers begin to branch out and try new things, or they learn something by fishing with or watching someone else catch them, and they discover a new pattern, and the weights begin to creep back up.

What we learn in that instance is that it wasn’t the death and destruction of a fishery that caused the drop in weights or numbers of fish caught; it is the ego of the angler that won’t let them admit that they just didn’t make an adjustment and relocate the bass.

It is ludicrous for any of us to think that we are so efficient as anglers that we can decimate a population of bass in a body of water when science and common sense tell us that it is not possible. 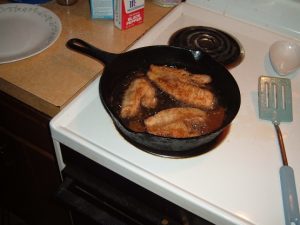 How Dare They Do This to Black Bass

Wrapping Up
Here is the absolute truth.  Black bass are a resource for the human race, they are our resource for food and enjoyment, and while we should be good stewards of that resource, it should never come at the expense of our relating to other human beings.

When we; emboldened by our “Internet Anonymity,” sit behind our computer screens and type ugly comments and threats to another person because they chose to post a photo of them exercising their legal rights to the use of their own personal property, then we are in the wrong – whether it is a limit of 12-inch spotted bass or a limit of 12-pound largemouth.

If we continue to exhibit this behavior from within our own ranks, it won’t be long before a group of people with differing viewpoints on our legal rights to own firearms can attack us and try to make us out to be villains – oh, wait a minute – they already do that. 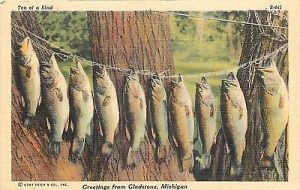 Is this a sign of Irresponsibility from our past, or people exercising their rights?

These are people, exercising their rights to do what they wish with their personal property.  If you feel that the resource is more valuable than hanging on a stringer or putting in the frying pan, then don’t do it.  But, to vilify another person for killing a fish – an animal without a soul – is ridiculous. I know many of you will not agree with me, but if you are honest with yourselves, you’ll stop placing more value on the fish than the anglers; after all, that’s the kind of thing PETA does.