Fishing from Postspawn through Summer

Though the sun has yet to crack the horizon, the anglers are lined up two abreast and seven boats deep on this somewhat out-of-the-way launch ramp. A breath of steam leaks from a cup of coffee here and there; eyes are groggy and glazed in the glow of brake lights and instrument gauges. Save the collection of shorts, sandals, sunglasses and enough bottled water to float the Queen Mary, you might think this was the start of duck season given such an early launch. 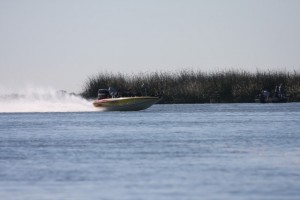 Nope. No shotguns, very little camouflage and no tail-wagging retrievers. Just a bunch of eager, Oklahoma anglers hoping for a big bite before they surrender the warm water to the sun, jet skis and pleasure boaters. You can expect the gravel parking lot to be void of extended-cab trucks and trailers that say “Ranger” and “Triton” by 10 o’clock or so – replaced by minivans, pontoon boats and tandem PWC trailers.

While the 47th State most certainly doesn’t have the market cornered on sizzling summertime temperatures, it just might trump any other domestic destination when it comes to day-to-day swings in the mercury. But in the land where running your air conditioner and heater in the same day is not only normal but necessary, June through September is far from variable. Where “hot” and “cold” have replaced winter, summer, spring and fall as the names of the seasons, these four months mark the height of the hot season – more often than not, the very hot season. But despite being seemingly ill prepared for the dog days after another bone-chilling winter, the heat won’t keep rods from being bent and lines being tugged by some of best bass these manmade reservoirs have to offer.

Longtime mainstays on the BASS Elite Series tour and native Oklahomans, Ken Cook and Kenyon Hill, have never let a few beads of sweat and the constant threat of a sunburn keep them off the water in the summer. By knowing where to focus their efforts; staying efficient and keeping their cool, they’ve adapted to the heat of their home state using tackle and tactics that translate to success anywhere a bass might roam.

The first step? Get tough.

“The heat’s really harder on you than the fish,” said Hill. “The fish are cold blooded so they adapt pretty well to their environment. But you gotta dress for the heat. Wear shorts; they make some great fishing shirts that keep you cool and offer some protection from the sun. Wear a floppy hat and have lots of stuff to drink.”

From there, Hill, a four-time Bassmaster Classic qualifier who is closing in on the $1 million career earnings mark this season aboard his Smith & Wesson-wrapped Triton X2, prefers to start in and around the main lake. At the same time, Cook, the 1991 Bassmaster Classic champion, who is in his first year of retirement from professional fishing, prefers to run to the upper reaches of the fishery to find his summertime bite. 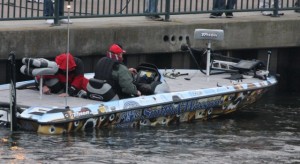 “Water in the summertime is usually pretty clear because there is less rain,” said Hill. “Though ‘clear’ can be a relative term depending on where you’re at.

But before Hill makes his first cast, the soon-to-be 46-year-old pro will spend a good amount of time behind the wheel and on his trolling motor with his eyes keenly tuned to his electronics. In search of schooling fish or simply the most subtle bottom characteristic that might hold a bass in deeper, cooler confines, Hill said he will mark the ends of drops and other features with marker buoys.

“You’ll spend at least as much time on your depth finder as fishing,” said Hill. “Be patient. The hardest part about fishing in the summer is finding them. The easy part is catching them.”

Though there may be a variety of rods on Hill’s front deck, outfitted with a Texas rig, jigging spoon or a 3/8-ounce drop shot rig – “All really good choices for catching fish this time of year,” Hill said – the likeliest first offering is going to be his bread and butter.

The son of renowned bass researcher, the late Dr. Loren Hill, Hill grew up with a front-row seat to the research that would help to revolutionize modern bass fishing. In those days, as he spent his summers at his father’s research station on Lake Texoma. There weren’t a lot of answers to the many questions that perplexed anglers; the things that wanted to be able to do weren’t yet possible because the equipment and technology didn’t yet exist.

In Hill, the spirit for innovation and research remains.

A shop behind his Norman, Okla., home is where the professional angler spends his down time playing mad scientist – pouring lead, bending hooks, tweaking baits and coming up with new ways to coax even the most finicky of fish. Even though shad are the dominant forage for summertime bass, Hill’s beefy jig – born in the shop and since dubbed “The Big Bopper” – has become his primary go-to bait.

“When I designed it, I started the thing with a regular football-head jig. I noticed that with a football-head jig that on brush piles and other structure you just got hung up more,” explained Hill. “I wanted my deep-water jig to be more efficient coming through wood. It resembles a conventional jig more than a football head, but it’s really a blend of the two.” 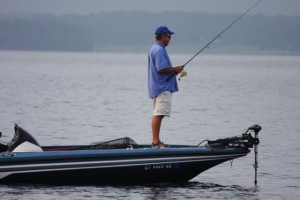 An Angler Fishes Offshore in Summer – photo by Dan O’Sullivan

The one-ounce jig is outfitted with a 4/0 hook (which is highly customized to suit the application) and features a recessed eye that is more flush than most other jigs to ensure that it navigates easily through cover. Paired with a hand-made skirt and tipped with a Zoom Super Speed Craw, Hill makes long casts around creek swings and river bends, looking for bass seeking cover in the deeper, cooler water while taking advantage of the current – especially in hydroelectric lakes.

“The hotter it gets, the more water they pull from the lakes to keep all those air conditioners running in town. And the more current there is in the water, the better off you’ll be,” said Hill. “Those fish will position themselves off a point facing the same direction as the current. It’s like a big Lazy Susan on a buffet: sooner or later something good is gonna come by.”

Hill said he likes the heaviness of the Big Bopper for two reasons: it sinks fast, which is important when fishing deep(er) water, plus it gives him good contact with the bottom. By knowing what kind of bottom is in the area he is fishing, Hill said it allows him to be more efficient and to better determine the bottom’s other defining characteristics. Employing a seven-foot, medium-heavy Micro Magic rod from Duckett Fishing topped with a 7.1:1 high-speed reel spooled with 15- to 20-pound fluorocarbon line (depending on water clarity), Hill said he has no problems recovering slack line on long casts and has plenty of turning power to hoist big bass away from the many rocks and brush piles.

If the water is muddy, Hill said he will stick to the bank and the shallow water, targeting structure. Some places, like the Deep Fork on Lake Eufaula in Hill’s home state, stay “so muddy you could track a raccoon across them.” In areas like these, despite water surface temperatures in excess of 90 degrees, Hill said anglers can still be successful flipping willow bushes in extremely skinny (less than a foot in many cases) water.

But if the water is clear and the bottom-banging Big Bopper won’t yield enough weight to win, Hill will turn to the tried-and-true point-running method, employing a Texas or Carolina rig.

“A Carolina rig with a one-ounce weight is an excellent way to find fish. You can fish one of those with a variety of baits like a worm, a centipede, a lizard and a whole bunch of others – plus you can cover massive amounts of water,” said Hill. “But I really like a Texas rig. I grew up fishing that way and in the summer it’s just hard to beat.” 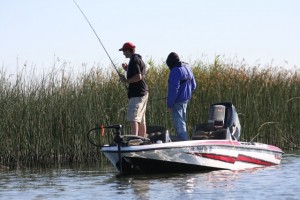 To Hill, size matters with a summertime Texas rig. A 10-inch Zoom Ol’ Monster in either Watermelon Red or Junebug are his mainstays when trying to beat the heat. Pinned to a 4/0, casting-style hook (but no heavy-wire hooks), Hill will stay in contact with the bottom using a 1/2-ounce tungsten sinker that he doesn’t peg and 15-pound fluorocarbon line on the same high-speed reel and rod he uses with his Big Bopper presentation.
“Not a whole lot changes when I’m fishing points in the summertime,” said Hill. “A big jig or a big Ol’ Monster worm, just working it slow and staying on bottom isn’t fancy – but it works.”

While Hill is roaming the deeper waters of the main lake looking for big fish in clear water, Cook is motoring to the upper reaches of the lake – and even up river – to find shallow, muddy water.

“The upper end of the lake is where you’ll find some water color – and probably the most current. Those are the two things that will allow bass to live in shallow water,” said Cook, the owner of six BASS tournament wins during a professional career that spanned across three decades. “If you go up the lake far enough, the water gets cooler and there will be shallow cover like bushes and rock banks and normally there will be a fish population there.”

Cook said he prefers to target bass that are holding tight to shade-giving cover in the shallow (less than 10 feet) water. There, the former fisheries biologist said, the bass are being lethargic, holding in an area where they feel safe and capitalizing on feeding opportunities at their leisure. And because shad are the primary food source during this time of year, this muddier, nutrient-rich water is a prime feeding ground for baitfish. While it’s good for the baitfish, it’s even better for hungry bass.

But don’t count on big bass with ravenous appetites, Cook warned. While there will be times and places when the fish may eat like they’ve got an angry tape worm, anglers must be able to catch fish that aren’t aggressive. For this, Cook calls on the reaction strike.

If shad are schooling near the surface, Cook reaches for old reliable: the spinnerbait. But even those days are few and far between, he said. He theorizes that fishing pressure has lessened the spinnerbait’s ability to coax fish in many places, meaning that alternate baits must be deployed. 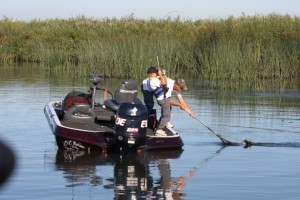 “A big jig, like 1/2 or 3/4 ounces, is a great reaction bait,” said Cook. “With a Berkley PowerBait Crazy Legs Chigger Craw as a trailer, it just falls so fast and has so much wiggle to it, it seems to trigger a reaction even though the fish might not be actively feeding.”

“The shaky head is ideal for areas with less cover, maybe a lot of rock or just a hard bottom,” Cook said. “I use just enough weight to make it sink and hold to the bottom and just shake it. You want that jig head in the rocks or on the bottom but not really moving when you shake it. You want that tail to stand up and dance. It makes a lot of noise down there and gets their attention.”

So whether you like deep water or shallow; whether your favorite fishery is muddy, clear or somewhere in between, two anglers who are no strangers to sweating for their five-fish limit know that successful summertime fishing doesn’t require a pre-dawn launch a brunch time return. Go big with the baits, go slow with the presentation and go back to the ramp with a full livewell to make your air conditioner-hugging buddies jealous.