Nothing in the sport of bass fishing is hotter than the Alabama Rig. When Paul Elias won the FLW Tour Open on Lake Guntersville in October, it started a firestorm of activity across the fishing tackle world. The original Alabama Rig became the hottest topic in an instant, and luremakers sprang into action looking to capitalize on the opportunity.

While luremakers jumped at the chance to make quick sales, talk amongst anglers in across the country began to heat up as well. The originals began selling on auction sites for as much as $100 or more and while hoards of people were clamoring to find them, other groups were voicing opposition to them as a legal lure.

Advanced Angler wanted to know what the pros that make up this industry’s most public face though of the Alabama Rig. Were they using it, did they like it, catch fish on it? Or, were they opposed to its use in tournaments, and if so, what were their reasons?

Our discussions were not meant to take sides, or try to influence the topic. Rather, they are just to get a sense for what some of the anglers were thinking about the rig, what they thought its place would be in tournaments, and how they would like to see it handled.

We talked to Elite Series Pros Mark Menendez, John Murray and Timmy Horton and FLW Tour pros Dave Lefebre and Michael Murphy to see what they had in common or not so in common with the Alabama Rig. Below are what they had to say. 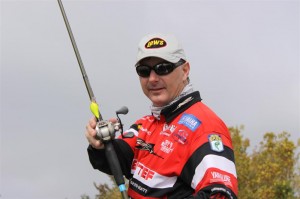 Mark Menendez
Menendez talked about what he had been hearing from anglers using the rig, what to expect from it, and what it meant to the tackle industry. He is one angler who feels that the Alabama Rig should be allowed in tournaments – according to state regulations.

“I think that the conditions this year all combined to create a perfect storm for the Alabama Rig,” said Menendez. “We had a long, mild fall, and that made bass not move toward their winter haunts, so it made the rig more effective for a longer period of time.

The people that I’ve spoken to who are fishing it a lot are telling me that it is definitely a lure that is most effective in stained water,” he said. “When they use it in clear water, it certainly draws the fish to it, but because they get such a good look at it that they peel away from it. However, once they get into water with a little more color, they start getting those same type of fish to bite.

“I try to look at it from the manufacturer and retailer perspective,” he said. “The Alabama Rig has people excited about fishing again, and if they buy one of these rigs at the retailer, they have to purchase jigheads and swimbaits to go with it. For my sponsor, Strike King, that means more people purchasing Flats Heads and Shadalicious swimbaits that may not have before. I think it’s good for the sport and is driving sales, as well as anglers to the water.” 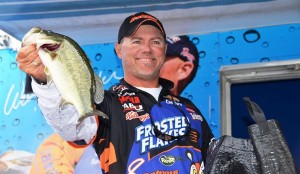 Dave Lefebre
An FLW Tour pro, Lefebre is concerned about what ramifications the Alabama Rig would have on the sport for the long run. “I’m not in favor of the Alabama Rig being used in professional level tournaments because I believe that it is going to create controversy,” Lefebre said. “Each state has its own set of regulations that govern the use of multi-hook rigs, and they are all different.

“Let’s say we go into a tournament, and I research the regulations of multi-hook rigs and decide that it is not a legal rig to use in a specific state, but another angler decides it is and uses it – it creates controversy,” said Lefebre. “That is one of the main reasons I think it shouldn’t be used because there are no clear cut regulations in place to make sure everyone is on the same page. Many people want to put this into the category of Structure Scan, or the Hydrowave, but it truly is in its own category due to the nature of the differing regulations in each state.

“I am also worried about the health of our fisheries and the effect that this rig will have on them,” he said. “We already face problems with animal rights organizations and this kind of thing means that more fish have a potential to get injured or killed using it, and that needs to be considered.

“It’s not that I’m against using the Alabama Rig for the everyday angler, I just think that as the competitors who represent the spot, we shouldn’t be throwing it,” he said “The way things are, it’s going to force all of us to throw it. I truly believe it will be regulated completely eventually, and think that it’s better not to wait until it is a bigger issue.” 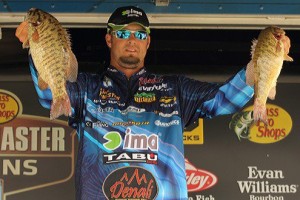 Michael Murphy
South Carolina pro Michael Murphy believes that the rig should be allowed in the states that it is legal in, but has a concern with the conservation side that he feels has not yet been discussed when it comes to the term “possession”. “Let’s say that there is a pro and a Co-angler in a boat, and they both have their limit in the livewell,” said Murphy. “Then, one of the anglers has a double or triple hookup on the rig, and that boat is now in violation of the state law in regards to possession in most areas of the country.

“Most states allow for an angler to cull, which means they could catch a sixth fish and cull back to their legal limit,” he said. “If a conservation officer happens to come by, see the activity and decide to search that boat. The anglers have 13 or 14 fish in their possession. That officer could decide to ticket, or he could confiscate the fish, the boat, and the equipment.

“I’m not saying that is likely to happen, but it is a possibility that has to be discussed,” said Murphy. “It creates a situation where a legal presentation could result in a rule being violated and it I believe that things need to be clarified. Other than that, I see no problem with its use.” 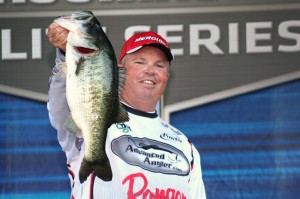 John Murray
Murray, and Elite Series pro from Phoenix, Ariz. is also in favor of the rig’s use in tournaments, and has already used it in competition around his home. He also said that he has long known of the effectiveness of multi-lure rigs.

“I won a tournament on an Alabama Rig with two hooks and three teasers on it at Lake Roosevelt here in Arizona,” he said. “I caught back to back four pounders on it, and won by three pounds; so I see the effectiveness of it. But, just to prove that it’s not a magic lure, I fished my next event and only managed to catch a catfish on it.

“I fished an U.S. Bass tournament at Lake Mojave that Fred Ward won 25 years ago, and he did it using five or six Gitzits on one line,” he said. “It came out years later that he only had hooks on two of the Gitzits, but it showed me how effective a multi-lure rig can be.

“As long as it is fair and an even playing field for each angler, I have no problem with the Alabama Rig being used in tournaments.” 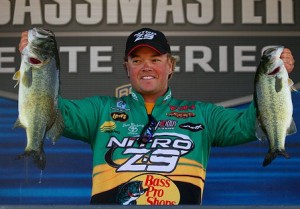 Timmy Horton
Being from Muscle Shoals, Ala., Horton is at ground zero for the Alabama Rig explosion, and while he has used it with much success on Pickwick Lake, near his Northern Alabama home, he admits being a little behind the trend initially.

“Even though Andy Potts makes them right near my home, I was a little late to the Alabama Rig party,” said Horton. “But, I’ve used it quite a bit since then, and I’ve caught a lot of fish on it, and I recognize it as a great way to catch fish.

“I know that there is a lot of controversy about it, but to me it is no different than using a big Super Spook with a front runner on it,” he said. “I like to throw it with five or six-inch YUM Money Minnows and have seen how good it can be.

“I’ve not experienced any time that it has been any danger to the fish, but I think that a lot of anglers are going to have a bunch of sore shoulders and elbows from tossing it around. I think that it’s a great tool, and is going to be an effective tournament tool.”

That’s what some of our sport’s best had to say about the Alabama Rig. Whether the leagues decide to exclude it from use is yet to be seen, but there are still some points that seem to need some discussion and refining. However this plays out, it certainly has anglers, tournament trails, retail stores and manufacturers talking, and we’ll just see how it all shapes up.