Flippin’ Out for Big Summertime Bass 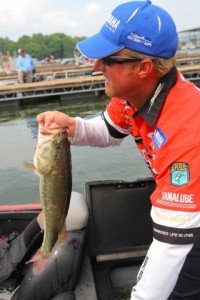 Now that the Fourth of July has come and gone, the heat is on in many parts of bass country.

From South Carolina to Texas and a whole lot of places in-between, the dog days of summer are rapidly approaching.

In many areas, the thermometer is well into the 90s, the heat index is into the triple digit range and hydrilla and other types of aquatic weeds are heavily matting the surface of local bass waters.

Time to hang up the bass fishing gear until the cooler days of fall arrive?

Not if you’re willing to flip out.

Get a heavy jig-and-pig combo, flipping rig, or Texas-rigged soft plastic to slither and slide its way through a small hole in the otherwise impenetrable heavy grass rooftop and you might want to get ready.

To set the hook on an unseen bucketmouth bass, that is.

So says Kelly Jordon, the only professional angler on the planet to record a major win on all three of the professional fishing circuits.

So far, KJ has four B.A.S.S. wins, one FLW Tour win, and most recently, the Jack Link’s Major League Fishing Challenge Cup on his career resume. 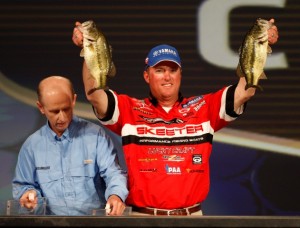 Along with those six wins on pro bass fishing’s “Big Three” circuits, add a Toyota Texas Bass Classic win, nine trips to the Bassmaster Classic and more than $1.5 million in career earnings to boot.

So when the Palestine, Texas pro starts talking about flipping out during the summer months, be sure to take notes.

Jordon often likes to start his flipping with a white or black jig in the summer months that is coupled with a black/blue or pumpkin green flecked skirt tipped with a plastic trailer.

But jig-and-pig bait combos aren’t the only way that the 43-year old Jordon will flip out for dog days bass.

KJ has also been known to use a good sized Texas-rigged plastic worm when it comes time to flip for a big bass on a favored water-body like Lake Fork.

“The weight depends on the depth,” Jordon has told me. “I’ll use anywhere from a ½ ounce to ¾-ounce to even a one-ounce jig (depending on the circumstances).” 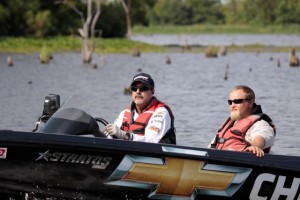 Larry Nixon Moving through a Backwater- photo by Dan O’Sullivan

“Sometimes they want a ¼-ounce (jig) in 30-feet of water and it takes an hour to fall and hit the bottom, but that’s what they want and (then) they’ll hit it.

One of the sport’s all-time greats, the Bee Branch, Ark. pro has amassed a Hall of Fame career that includes 14 B.A.S.S. wins – including the 1983 Bassmaster Classic – along with four FLW Tour wins.

Add in 25 Bassmaster Classic appearances, 17 FLW Forrest Wood Cup appearances, and two B.A.S.S. Angler of the Year awards and Nixon is as good as any professional angler that has ever lived.

All told, the “General” has won a staggering amount of money in a career that began back in 1977. In fact, Nixon’s career winnings currently total more than $3.2 million dollars.

Much of that money has come thanks to the Nixon’s use of the flipping technique over the years.

“(I like using) jigs and worms when you can start looking into the water and see your ambush point with your eye,” Nixon has told me.

“That’s where you’re pitching jigs and worms into holes, onto little points, next to objects, and just about any place you can visualize a bass sitting there,” he added. 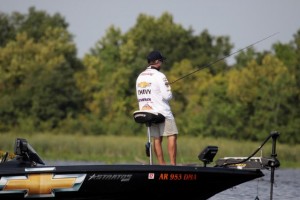 “You can drop your bait right in front of them, they get excited, and you get a reaction strike.”

To get that reaction strike, Nixon has often used seven to eight-inch Texas-rigged plastic worms coupled with ¼ to ½-ounce sinkers.

The size of the sinker is often determined by the size of the fish that the Arkansas pro is seeking on that particular day and the amount of weight needed to penetrate the bait down through the mat of vegetative cover.

When using a jig, Nixon uses a version heavy enough to penetrate the grass or vegetation mat. He’ll also often rig the jig with a plastic worm trailer, something that he believes helps to streamline the bait’s profile.

“(It helps give the jig) better penetration in the summer with a bait that is long rather than one that is bulky,” said Nixon. “It helps them penetrate into holes that it’s hard for a bait to fall into.”

But it’s in the shadowy recesses of such dark places – an air-conditioned man-cave if you will – that the summer’s biggest and baddest bass are lurking.

They’re in a shady spot. They’ve got a cool drink handy.

And they’re in a heat-induced grumpy mood, just waiting to pounce on the next unsuspecting morsel that swims on by.

Make that morsel one that is tied to the end of your line and look out.

Because you’ll soon be flipping out too, taking smart-phone photos to send to your buddy while you show off the summer’s biggest bass.