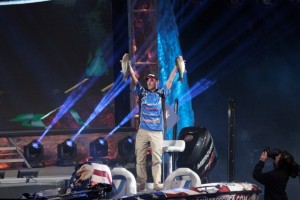 The Bell rings and the students file in at Dyer Elementary School in South Portland Maine.  This 300 student elementary school, whose motto is “Grow, Learn, Achieve, Create, Succeed” is where 2013 Bassmaster Classic competitor Jonathon Carter works as a first grade teacher.  Carter is a B.A.S.S Nation angler who is the first person from Maine to ever qualify for the Classic.

His journey started 12 years ago when Carter started to competitively fish during the summer between his senior year in high school and his freshman year in college.  Two years ago Carter decided to put in the “time and effort” and started competing in Nation events on a regular basis.  Qualifying for the classic through “the Nation” was no easy feat and Carter points out that is it was “an awesome experience, but frustrating at times because it takes so long”.

“Two years ago I came close to qualifying for the state team and it was frustrating because I really wanted to fish the lake in Canada where the regional event was held because it was a small mouth lake”.  That year Carter narrowly missed making the state team but did not let that experience discourage him. He said he told his friends “that’s it, I am going to make the classic in 2013 and it just worked out that way”.

It is apparent from our conversation that this first grade teacher is also a student of bass fishing.  Each question asked brings an answer about what he has learned and what he continues to learn from his days out on the water.  Stored in a memory bank you can tell that these experiences are called upon to help Carter prepare for future events.

Last year’s regional was held on the Mystic and Charles River in Boston, Mass.  When asked about the tournament Carter said he learned how to “fish in a crowd”, and “decided not to think about anyone else and just think about my own thing.”  Two important lessons to learn during a hard weekend that Carter managed to win by sticking to his game plan and fishing the same area as many of the other competitors.  “I knew the fish were in there from practice, and I just stuck to my plan.”

The next step to making the Classic brought Carter to the National Championship at Wheeler Lake in Alabama.  Being from Maine it was hard to prepare for this challenge.  Relying on Google earth and research on past tournament history Carter was able to put together a game plan.  He was able to get down to Wheeler to pre-fish for the event and “rented 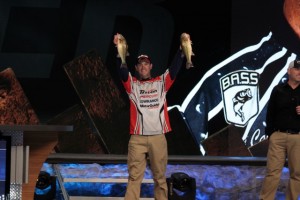 Carter Shows his Class by Thanking the B.A.S.S. Nation Alliance by Wearing Their Jersey on Day Two – photo b Dan O’Sullivan

and johnboat and just drove around.”  His preparation brought him to the backs of creeks in the tree line.  “I caught all my fish in those trees.”  Finishing first in the Eastern Division meant Carter had punched his ticket to the classic.

Preparing for the classic Carter said, “The hardest part was not being able to fish between Nationals and the Classic.”  With the weather in Maine turning to winter he used similar ways to prepare for Grand Lake.  A plan was put together for the tournament.  “I had two plans.  The first was if it was really cold like it was, and the second was if it warmed up and the fish went into pre-spawn”.  A rushed prefish was hard on Carter, “I only had two days off from school for thanksgiving.”  Using the little time on the water and his at home research Carter set out on his way to Grand Lake.

The first day of the Classic, Carter was the first competitor on the water.  This was the first time he would be on the water and come face to face with all of the spectators.  “It was dark when I came around the corner and saw all the 3000 spectators.  It was a big rush and then to pull up with all of my heroes and be able to chat with them was just surreal,” he said.  “It was one of the most incredible feelings I’ve ever had in my life.  That first day I thought to myself that this is what I have to do the rest of my life”.

Using the excitement of the first day was a spring board that Carter used to finish 17th with 36 pounds, 10 ounces for the tournament.  This was a great first showing for this Maine angler that hopes to make a career as a professional angler.  Asked about his first classic he said, “It was amazing.  Well worth the time and money it took to get to this point.  The people I have met have been fantastic; I’ve made a lot of good friends”.

With his classic experience over Carter says that “it’s nice to know that I’ve met those legendary guys and they wanted me to do well.  They welcomed me into their realm”.  While he will not be fishing Nation events to make the Classic this summer, he will be fishing all three of the B.A.S.S. Northern Opens and FLW Everstarts. 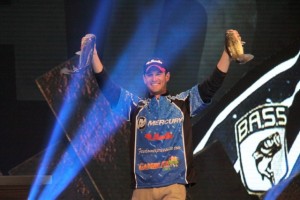 As the conversation is winding down with the Ffrst grade teacher.  The last question is one that brings a chuckle out of Carter.  Asked what he wants people to know about him he replies that he is thankful for the support that he has had and also says that “if I can help someone else learn something I will; I’ve been lucky to have people help me,” he said.  “I want to give that back”.  He also gives credit to his fishing partner Joe, “He is always pushing me to learn.”

The life of a teacher is about learning, and Carter is a teacher who is learning what it takes to become a professional angler.  Resources such as the Internet has helped him prepare for journey he is about to take.

Using his method for research, Google search Jonathon Carter fishing.  You will find a newsletter from his school principal up in Maine.  It contains a fact sheet about one of his teachers.  That teacher is Mr. Carter and it says that he likes to compete in bass tournaments.  The second revealing fact is that he had a Hedgehog as a childhood pet.

You learn something new every day!