Jigs catch ’em. Whether in heavy cover, around boat docks, on rockpiles or on gravelly flats – jigs can out produce other lures at any time. But, jigs have a few negative properties that can make them less than ideal in every situation. 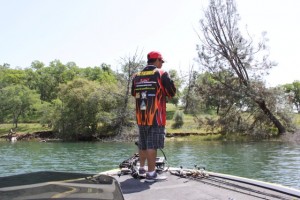 For example, jigs may not always be the best around grass. The fact that they have a fiber weedguard protecting the hook means that coming through grass can be less than a weedless adventure. Jigs also have a reputation for losing their fair share of bass. Something about the lead head and the hook seems to provide a certain amount of leverage for the fish to throw the jig.

Greg Gutierrez, a former Bassmaster Elite Series pro and longtime Western competitor has found a solution to the jig issues. “I love to throw a jig,” he said. “But, there are times that I need the profile, but can’t deal with the issues of a jig. Usually the good parts, far outweigh the bad parts, but I wanted something to be as close to perfect as can be.”
The answer came in his own special creation; we’ll call it his “Jig Thingy.”

What is a Jig Thingy?
Gutierrez began experimenting with lure components that would give him the overall look of a jig, but allow him to present it in areas that a regular jig wouldn’t give him the results he wanted. he started with a worm hook, a tungsten weight, a glass bead, a Reaction Innovations Sweet Beaver and a spinnerbait or jig skirt.

“I guess it was kind of a crude Punch Rig before there were Punch Rigs,” he said. “What I wanted was a lure that I could throw in all sorts of places and bring it through.” His creation worked.

With the advent of the Paycheck Baits Punch Skirt, the rig became simpler. By using the Punch Skirt, he could eliminate the glass bead and the spinnerbait skirt and his Jig Thingy became more streamlined. “It has bulk, sound, appearance and effectiveness,” said Gutierrez.

Where to use the Jig Thingy
Gutierrez said that his creation can be used anywhere he wants to throw a lure, have it hang up slightly in cover, and pop through. “I really like to get it into cover and shake it,” he said. “when I pull it free, the weight and the lure separate and the lure just kind of slow falls to the bottom a little; that’s when they bite.” 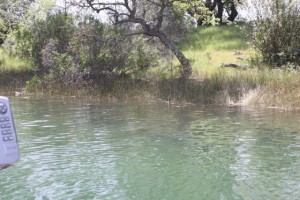 He loves it in the spring when rains and runoff create a situation where the lake level is rising and the shoreline grasses become flooded. his feeling is that the streamlined approach comes through those firm grasses better than a jig. He also likes it around willow trees, rockpiles and brishpiles.

The Setup
He starts with a tungsten bullet weight of varying size, depending on the depth, he then threads the Punch Skirt on the line, then ties a 4/0 to 5/0 offset shank round bend worm hook on the line. He then threads the Sweet Beaver on the line and starts fishing. “I leave the weight unpegged and I prefer the lighter wire hook for this setup,” he said. “I can use lighter line and still penetrate well, and the hook doesn’t tear up the soft plastic creature as much as a straight shank Flipping hook.”

Colors
He prefers to mimic bream and crawdads in his color choices. He said he likes to always include a small amount of red flake in his plastics, and in colder water likes to have some blues in the mix as well. “It’s usually a Green Pumpkin with red flake, Spring Break or California 420 color with some sort of coordinated Punch Skirt,” he said. “I want them to be matching, but have a little flash of contrasting color in it with the flake colors.” 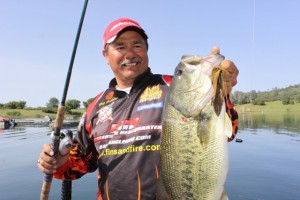 Final Tips
Gutierrez suggested that angler take their time and fish the lure with some finesse to get the most out of it. “You really have to take your time and fish it slowly,” he said. If you try to overpower it with big movements of the rod, you’ll lose some of the effectiveness. The best strikes come after the lure has hung up and when it shakes free from cover. When the sinker falls to the bottom and the lure kind of subtly falls behind it; that’s when strikes occur.

“It doesn’t replace a jig for me, I still use a lot of them,” he said. “But, it has really allowed me to present a jig profile in places that i would have been frustrated before.”