Greg Hackney – Running Into Great Ones 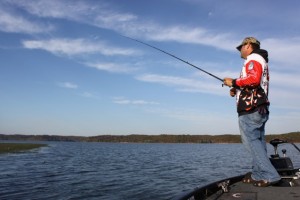 In case you haven’t paid attention, Greg Hackney is about to enter an exclusive group.

If the Gonzales, La. pro can finish as strong tomorrow as he did today, he will would have an inside shot at winning the 2015 Toyota Bassmaster Angler of the Year title. If the season were to end today, Hackney would close out the regular season with a 19 point lead in the season long race. 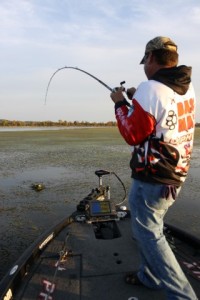 Only so many anglers can say that they have won three legs of the career Grand Slam, and without going through an exhaustive search, only Hackney and Jay Yelas are truly in position to accomplish the feat. Kevin VanDam is one who could, as could Davy Hite, but both need titles on the FLW Tour and they fish the Bassmaster Elite Series. George Cochran could have earned it with an FLW Tour Angler of the Year title, but he retired last year. David Fritts is also one who could claim the Slam with an FLW Tour Angler of the Year.

Truthfully, if Hackney wins the 2015 Bassmaster Angler of the Year Title, he and Yelas have the inside track to do it. Hackney would only need to win the Bassmaster Classic, and Yelas the Forrest Wood Cup.

The ironic thing about where Hackney is positioned as an angler, is that most folks would not even consider him as the type who could contend for Angler of the Year titles. His reputation is one of a headhunter; the kind of guy who swings for the fences at every event; the kind of angler who hits the home run or strikes out trying; this couldn’t be farther than the truth.

In truth, Hackney is one of the most consistent anglers on the tours. In B.A.S.S. competition, Hackney has cashed check in a little over 78-percent of the events he has entered, and in FLW, he has matched that pace, if not exceeded it. 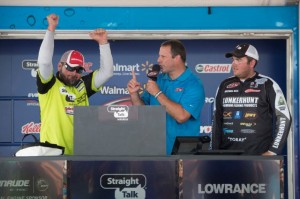 The scary thing about him is that he is only getting better. He has had only one subpar season in his career, and that was last year on the Bassmaster Elite Series, where he failed to qualify for the Bassmaster Classic, however prior to that, Hackney had qualified for 11 straight Bassmaster Classics since his Rookie season.

His development as an angler is evident in what he said to me in an interview not long after he had won the 2009 Forrest Wood Cup. It was after the final practice day for the 2010 Bassmaster Classic when I asked him what he had learned in winning the Cup five months earlier.

His reply was interesting. He told me that he had learned to fish for the good ones and let the great ones happen. When I probed him a little further for examples of what he said, he told me that he had scrapped entire practices after two full days to try and find a holy grail because of something he perceived was going on with the rest of the field. 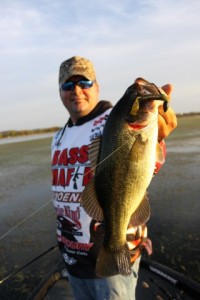 Whether it was from dock talk or some other manner, Hackney said that he would have found something steady, feel like he needed home run type patterns and start all over on the final day of practice into the tournament. “Let’s say I’d found a steady 16 or 17 pounds in practice, but had a feeling I couldn’t win with it; I’d look for 22 or 23 pounds on the final practice day,” he said. “I’d often find one or two bites that would make me feel like I was onto something, and I’d run that program into the tournament and struggle. Then I’d find out that what I had originally found would have been good enough to start the event off in pretty good position and I’d have to scramble to make up ground.”
The good news for Hackney is that it typically would work out for him, but now that he is armed with the education he has been taking in, he is becoming more dangerous. He won an FLW Tour event this year on Pickwick Lake and stands poised to make a run at the Toyota Bassmaster Angler of the Year. That will put him in the position to win the career Grand Slam, and trust me, with his track record, the chances of him winning a Bassmaster Classic in his career are greater than him not.

There are anglers who have had flashier careers; especially during the Elite Series era. Hackney’s steady excellence has been overshadowed by the likes of his Strike King teammate VanDam or the stellar seasons that Skeet Reese has put together.

But, watch out, because recollecting on his own words; Hackney has been putting together a bunch of “good ones” over the years, and he is truly starting to run together some “great ones.”