In Deep for Summer with John Murray 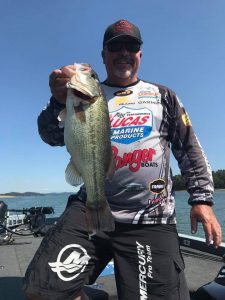 John Murray with a Summertime Bass

Phoenix, Ariz. based tour pro John Murray is a self avowed deep structure angler.  His passion for finding offshore fish is so strong, that most of the time he will do everything he can to find schools of fish that are relatively unmolested, as deep as he can find them.

From his earliest days as an angler, Murray has been known for his strength in two areas; topwater fishing and finesse fishing in deep water.  But, as any good angler does, Murray learned to adapt his pure light line skills from his Western days to his new found playing grounds of the East, once he made the leap.

Like any other pro, Murray knows that he has to be proficient in not only presenting the lure correctly, but also in locating bass first; something he has done well throughout his career.  “I work to find the fish that I think nobody else will find,” he said.  “Once I do, I try to give them something that I know will produce bites, and this time of the year, I have three fallbacks that I use with regularity.”

Of course, he will throw a crankbait in the right settings, but when the conditions are not prime for the aggressive reaction presentation, he continues to produce results by toning it down a bit.  However, any good bass fishing success story begins with the search.

A loner of sorts on the water, Murray tends to try and keep himself out of the middle of the combat fishing scene.  As a result, his research periods find him looking for obscure fishing holes.  Once he arrives at a lake, he launches his Ranger / Mercury rig and immediately begins scanning his Garmin electronics looking for what he calls “the activity zone.”

“I look to see the depth zone that the baitfish are active at on my screens while I’m idling out of the marina,” he said.  “It can be pretty obvious what depth level the baitfish is using, because you will see bands of bait on your screen; especially this time of the year.  I use that information to begin searching for the structure I want to fish.” 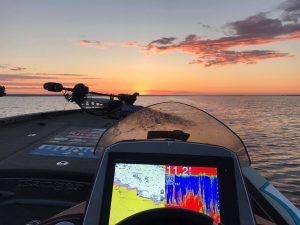 John Murray Idling Out for Practice

What Murray said is that once you locate that depth zone, the baitfish in most of the lake will find that level to be their comfort zone.  Of course, there are resident fish shallow that feed on bluegill and other creatures, but because he is looking for schools, he likes to locate this zone.

Not just any structure either.  “I want the most isolated piece of structure I can find at that level,” he said.  “The longest point, the lone hump in that range with deep water all around; that’s the type of stuff that bass will have to congregate on because it is also the only thing around for them to relate to.”

They will also suspend at the level just off of structure elements, and if that’s what he comes across, he can adjust himself to that with his presentations.

Big Favorites for Going Deep
The adaptations Murray has made for his offshore fishing from the West to the East have revolved around the lures he has used to draw strikes.  Where deep structure absolutely required light line on the left coast, he found he could beef things up in the rest of the country.  With that in mind, he could leave the split shot rigs and vertical jigging spoons alone, and turn to jigs and creatures – mainly. He does have one little Western twist as his backup for tough times. 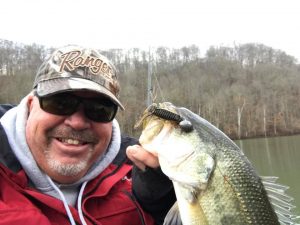 In ideal conditions, Murray said that he prefers to use a football head jig and a trailer, or if the fish are slightly more aggressive, he turns to a creature bait scooted across the bottom.

His first choice is a jig of his own design; the Papa Mur Jig by River2Sea, a football jig with a uniquely designed hook for proper rigging of trailers and holding hooked fish.  For deeper water, he prefers to use the 7/8-ounce size, and he chooses colors by the water clarity.  He likes green pumpkin, watermelon and brown based colors for clear water, and black for dirtier water.

He matches the trailers for conditions as well.  If bass are sluggish, he tips his jig with a Gene Larew Salt Craw.  If they are aggressively moving through the schools of bait, he will opt for a Gene Larew Rattlin’ Crawl’R and if they are in between, a Gene Larew Hoo Daddy Jr.’s swimming tails are a hit.

If the bass are active, he makes short hops along the bottom allowing the trailer to create action causing fish to strike.  If they are sluggish, he employs a stroking technique that lift the lure three to six feet off the bottom, allowing it to fall down quickly on a semi-slack line, making bass respond in reflex,

If the fish are holding to the bottom, he turns to an 11/16-ounce Gene Larew Hardhead rigged with a Gene Larew Biffle Bug, which he scoots along the bottom, allowing the head to beat the rocks, creating reaction strikes.

He rigs both the Papa Mur jig and the Biffle Bug setup on a 7’4″ heavy action Team Lew’s Custom Pro Magnum Pitching rod with a Team Lew’s Hypermag reel with 7.5:1 retrieve speed.  He spools 15 to 17-pound-test Fluorocarbon line for the Papa Mur Jig, and upgrades the same brand of line to 17 to 20-pound-test for the Biffle Bug depending on depth and severity of the rocks on the bottom. 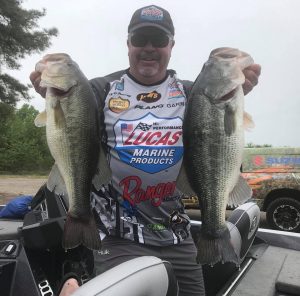 He rigs a 7’6” medium-heavy Team Lew’s Custom Pro spinning rod and Team Lew’s size 3000 spinning reel with 20-pound-test braided line with a 6 to 8-pound-test leader of Fluorocarbon.  He ties a 1/0 Rebarb style finesse hook and a 3/16 to 3/8-ounce River2Sea Tungsten Tear Drop sinker to the line, then affixes his 6-inch Gene Larew TattleTail worm to the hook.”

“I can pull this bait along the bottom and let the little tail give vibration off, or I can shake it vertically and let the tail dance for suspended fish,” he said.  “The one thing I am careful to do is to not overwork the dropshot rig. These fish are spooky, and unnatural action can make them not bite.  I try not to shake the rod too much, just let the natural action of the waves provide the action.”

Wrapping Up
Murray left us by giving us a final piece of advice.  “Try to find the most obscure structure you can locate, and give a couple of these techniques a try,” he said.  “I’ve been using them to catch fish for years, and with some of the newer tools at my disposal now, I’ve really been able to produce some great results.”