by John Crews – as told to Dan O’Sullivan 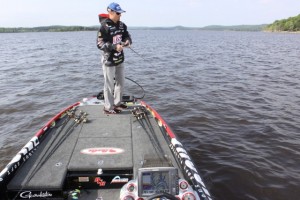 I love deep cranking; actually, I love fishing crankbaits, but when the bass pull offshore and get bunched up on humps and ledges; a deep crankbait is one of the best ways to find, and catch them.  Crankbaits are often called “no brainer lures,” but, let me tell you, there is nothing un-intelligent about fishing crankbaits, or designing one.

We all know that they got that nickname because an angler can cast them out and reel them in, the baits create their own action; meaning any idiot can throw them and catch fish.  The statement is true, unless the angler wants to use a crankbait to try and consistently catch the kind of bass that can win tournaments.

So you all know, I grew up in the area of the country that David Fritts ruled for so many years; this is crankbait country.  They work extremely well all over the country, but it is this area of North Carolina, South Carolina and Virginia that anglers seek out new ways to make fish strike a crankbait.  Fritts’ exploits with the old Poes Lures really created a new market out here.

Anglers out here get really detailed in their retrieves, talking about lining up to present a crankbait to a single piece of cover or structure.  Once they place the perfect cast, they begin a retrieve that will find that lure deflecting off of a single boulder or stump triggering a strike from hopefully a big largemouth.

There are many good crankbaits on the market, but none that combined the best parts of the lure category into one package.  That is precisely why I asked SPRO to help me make a deep diving version of my Little John.

I wanted six things in a deep crankbait.  I needed the lure to cast a mile, get really deep, have flat sides so that it doesn’t roll as much, have great action and runs bill down so that the lure doesn’t stop when the bait runs the lake bottom, would slowly back up when paused and was not overbearing to crank.

Say hello to my little friend; the Little John DD. 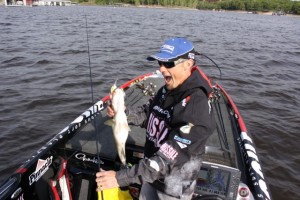 The Crankbait Lab
We built the Little John DD to do all of the things that I listed above; it truly is the crankbait I was looking for.  The Little John DD weighs in at one ounce, so it casts like a bullet.  But, it is more than just the overall weight of the lure that makes it cast so well.  Like the other baits in the Little John line, we incorporated a weight transfer system into the body, so that it stays straight in the wind.

While I wanted a weight transfer system, I still wanted a bait with a subtle noisemaker as opposed to loud rattles, so we used the same “Soft Tungsten” weight in the system as opposed to a hard tungsten ball that creates a lot of racket.

We played with the positioning of everything from the line tie to the hook hangers when we were testing the Little John DD to come up with the right action.  Remember, I wanted the right action that didn’t tire me out to cast and retrieve all day, but I also wanted it to reach the bottom quickly and maintain its ability to track and wiggle when in contact with the bottom.

To accomplish all of these things, everything had to be in just the right place. So the precise position of the hardware was critical.  Along with the positioning of the hardware, we also equipped the Little John DD with two ultra sharp size two black nickel Gamakatsu hooks, so they grab and hold tight.

My Equipment
To get the most out of the capabilities of the Little John DD, you have to use the right equipment.  Long casts really give the bait a chance to reach as deep as possible.  Because a long cast is so crucial, it really is designed to work on an extra long rod.  Any stout crankbait rod will do, but one that is 7’6” or longer is best, but it still needs to have a tip that’s soft enough to allow the fish to take the bait deep when they strike.

I worked with Pinnacle to come up with the perfect rod for throwing the Little John DD, working it deep, allowing the fish to take the bait deep and set the hook effectively.  The 7’11” DHC5 medium-heavy Cranking rod is a medium action, fast taper graphite rod; with it I can feel everything my bait is doing 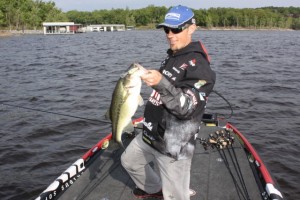 The rod really needs to absorb some of the pressure of a diving plug, but the right reel type is a big part of that as well.  I use a 5.5:1 Pinnacle Optimus LTE retrieve baitcasting reel because the gearing has the right power to manhandle deep plugs.  Many guys like to go to a faster reel, and try to control the retrieve speed themselves, but I believe that combination doesn’t allow you to feel the bait as well.

I typically spool my reel with 12-pound-test Vicious Fluorocarbon line, and with it I can get the Little John DD into that 18 to 20 foot depth zone depending on the cast, but if the cover is sparse, and I want it to get a little deeper, I will downsize to 10-pound Vicious, and I can get the bait to go around 21 feet.

Presentation and Retrieve
I try to make really long casts with the Little John DD, a good rule of thumb is to try and make a cast that is twice as long as the depth I’m trying to hit.  For example, if the cover I’m targeting is 19 feet deep, then I want my cast to go at least 38 feet.  Because the dive angle of the Little John DD is so steep, I will want to position my boat so that the cover I’m targeting is about two thirds of the distance away; that way the lure has plenty of time to get down and work effectively.

I spoke earlier about the action of the Little John DD; this is exactly the kind of retrieve that it was designed for.  After I make my long cast, and begin with a medium – fast retrieve to get the lure down to the bottom, I want to power the bait over, around and through any rocks, stumps and shellbeds I can come into contact with.

This is where the design of the bait comes into play.  I made this bait so that it would slowly float back away from an obstruction.  If it was a suspending bait, it would hover around the cover, but this backs up slightly, just like a bream who uses only its lateral fins to sneak away from an attacker before it is seen.

After I make contact with a hard piece of cover, I often allow the bait to pause for a moment, then begin the retrieve again; this is often where strikes occur.  Sometimes, when the fish are in a more aggressive mood, I will keep the bait moving steadily along the bottom, crashing through obstructions and generating reaction strikes.

Both of these retrieves were used in two of the Elite Series tournaments I fished in earlier this year.  One of them, at Pickwick Lake, I didn’t do as well as I wanted to, but I coaxed 30 to 40 fish a day to strike by pausing after striking an object.  The weather was cool, and the fish were a little sluggish around the fronts. 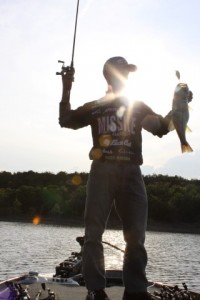 The following week, at Lake Guntersville, I finished third by powering the bait through giant offshore schools of largemouth that had finished their spawning cycles and had settled into their summer patterns.  At Guntersville, the weather had stabilized and the current was steady for the most part, so the fish were more active.  I caught more than 100 bass a day, and was in contention to win my second event of the season with the bait I designed for exactly those conditions.

Choosing Colors
Like most other lures, I choose my colors based on the prevalent baitfish and the conditions.  Most of the time my first two choices would be Cell Mate and chartreuse and blue; those two colors produce just about everywhere in the country.  But there are other times that I would choose other colors.

For clear water conditions, with visibility of three feet or more, a Clear Chartreuse or Spooky Shad are most likely my first choices. If I had stained water, or overcast conditions, then Citrus Shad would be my first choice because it has reflective scales pattern on the side of the bait to give off a little flash.

In the fall I like to throw the Rootbeer Chartreuse color, because the brown back really seems to be key.  I also have a chartreuse / green back color that we call Homeboy that is a little brighter than the rest for those times with a little extra stain, and it’s really hard to beat Nasty Shad for its all around natural colorings of baitfish all over the country.

I grew up throwing crankbaits in an area that is home to some of the best plug throwers in the world, and I fell in love with the technique.  My hope is that the Little John DD will help a lot of other people feel the same way.