Live in the Current on the Coosa with Lee Pitts 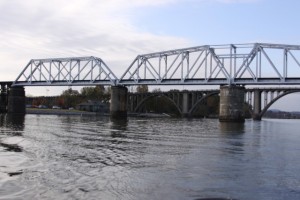 For many folks, one of the most difficult type of waterways to pattern is a river. For those who grew up fishing impoundments, the thought of navigating a river; let alone figuring out where fish are positioned, can be a scary and daunting task.

With that in mind, we sought the help of a true river rat, someone who makes their living each day by helping others catch fish on one of the most famous bass rivers in the country; the Coosa River, and her impoundments.

Lee Pitts has made his living as a guide on three Coosa River impoundments for many years. His business, Lee Pitts Outdoors, operates primarily on Weiss Lake, Neely Henry and Logan Martin, all three famous Coosa River impoundments. In the wintertime, Weiss Lake’s reputation as the World’s Best Crappie Fishery takes precedence, but for most of the year, he show people how to catch more bass on the Coosa.

“I love river fishing, especially on the Coosa,” he said. “I’ve never known a place where truly giant spotted bass can be caught all year round, even in the dead of summer. The trick is knowing where to look, and figuring out when to fish for them.”

Pitts said his equation relies around figuring out the cover, and reading the current. 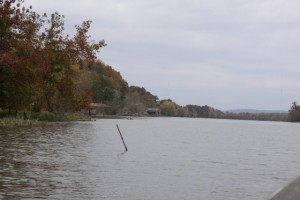 Submerged Cover on the Coosa River – photo by Dan O’Sullivan

Where and What?
Pitts said that the biggest problem anglers make when they fish a river like the Coosa is to fish too deep. “The oxygen content is too poor in that deeper water in the warmer months,” he said. “I had an old cat fisherman tell me years ago, that if he put his cages in four to five feet of water, he could collect them in five days, but if he put them out deeper, then those fish that got in it, would be dead in two. Fish will follow bait deep to feed occasionally, but they can’t stay there; so they quickly return shallow.”

His response to that information has been to target areas that have solid cover in three to five feet of water. But, he doesn’t just fish them at indiscriminate times, he hits his best stuff when the current is flowing. “I pay attention to the power generation schedules for a guide, but they are not always right on,” he said. “I watch the current around channel marker poles and bridge pilings, pollen and trash floating on the river, and decide when the flow has picked up by that as well; then I get to my good stuff.”

By good stuff, he means large trees and laydowns that the root balls or bases are sitting in three to five feet of water, and the canopy might sit out over the channel edge. Or, he might have a spot on top of a ledge that fish will sit on until the current starts up, and then the feed is on. “You might fish them multiple times in a day, but until the current lights up, they most likely will not bite,” he said. “When it does, you can load the boat.” 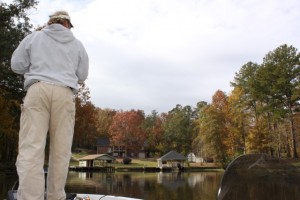 River Favorites
He carries a set of rods that allow him to target fish on both types of spots. For his ledge fishing, he prefers to make a quick blitz using deep diving crankbaits. That way, he can cover as many ledges as possible before the current slows.

If he is targeting the laydowns and current breaks; which he does most often, he prefers to use a swimming jig and a Flippin’ presentation. “I want to cover water quickly, so I use things that will help me do that,” he said. “My favorites are a Talon Lures Yana and a Gene Larew Salt Craw.”

He first targets the ends first with the Yana; which is a swim jig styled bait that has a spinning blade on the front. His favorite way to rig the Yana is to pair it with a Gene Larew Sweet Swimmer, but will also use a soft jerkbait if the kicking action is too strong. If he doesn’t get a response, he turns to the Flippin’ setup and moves inside the cover.

The How-to
Pitts approaches the cover from the down current side of the obstruction, so that he has the most control of his boat for the presentation. Using a 6’10” medium-heavy, fast taper Team Lew’s rod matched with a 6.4:1 Lew’s Speed Spool reel filled with 17-pound-test Vicious Ultimate Copolymer line; he presents his Yana just past the cover. He then quickly retrieves the lure towards the tree, and works the lure through the branches applying twitches of the rod creating an erratic retrieve.

If he doesn’t receive a bite, then he picks up his 7’6″ heavy action Team Lew’s Flippin’ Stick with the same model Lew’s reel and 20-pound-test Vicious Ultimate Copolymer and pitches a Texas Rigged Salt Craw on 3/8 to 1/2-ounce tungsten sinker tight to the tree. He allows the lure to fall quickly to the bottom; if he doesn’t receive a bite on the initial fall, then he shakes the rod tip to quiver the lure, makes a sharp hop, allows it to fall again, then retrieves to make the next presentation. 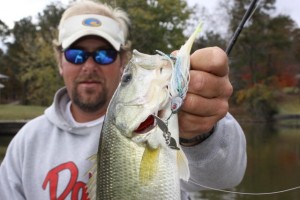 Colors
Pitts’ favorite colors are divided basically by the presentation. He likes shad patterns in the Yana, opting for Hoochie Shad, Sexy Shad or pearl white. “Fish that are feeding on a bait like this are chasing shad, so I want that color spectrum to show up in the water,” he said. “The same goes with crankbaits, I use something that mimics shad; chartreuse and blue or pearl white.”

Special Thoughts
He recommends using navigation aids to run the lakes until you become familiar with them. “The Coosa River is fairly easy to run around on, but you should use channel markers and your GPS mapping until you get familiar with it,” he said. “It’s pretty easy to see the lay of the land, but it’s best to keep to the channels and marked areas until you begin to know how everything is positioned.”

Pitts said that he likes to think of the bodies of water as two distinct fisheries with something for everyone. “The upper ends of them are basically, shallow, dirty water rivers with a lot of trash in the water for fish to hide behind,” he said. “The lower ends are more like reservoirs with a little bit clearer water; they act more like a lake. You can find something that you are comfortable fishing on our lakes.”