I’ve been fortunate throughout my career to get the chance to work with most of the big name pros that most people only get the chance to meet at a show or watch from afar. Being a professional communicator, I’m always impressed with how thorough they are at delivering their message and communicating their information.

But, at the heart of everything, I’m still an angler myself, and I really love the opportunity to learn from them as I watch them through the lens of my Canon. When I am on the water watching anglers fish, I can pick up clues that can help my fishing improve. 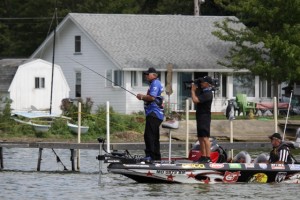 If I pay attention to details while I am on the water, I can learn more about how they are doing things to try to catch more bass. Now, to be fair and completely honest. When I’m on the water with them, I’m paying attention to the details more so that I can tell the story of an event to the readers, and to try to stay out of the way of the angler.

If I can begin to pick up on how an angler is covering a certain shoreline, then I can position myself appropriately for the right images. If I look at the Navionics chip in the boat I’m in, then I can see the contour lines and stay out of their way, but, that also helps me as an angler to understand why an angler is in the position they are.

Then, when I do interviews with them afterward, I can use those observations to get the information I need from them to tell the story, and write future articles.

That helps me tell that story, and selfishly – helps me learn too.

Love Flippin’
One of my favorite ways to fish is Flippin’. I love fishing frogs, cranking, topwater poppers, throwing jerkbaits and fishing tubes on jigheads. However, there is something about Flippin’ a bait into heavy cover and seeing that fish trashing around in that matted mess after I set the hook. I’m not as good with it as I should be, but I love Flippin’.

I’ve had some excellent opportunities through my experience on Major League Fishing venues to witness some unbelievable anglers do some amazing things with a Flippin’ rod, and from what I’ve witnessed in the past three events, everyday anglers don’t go to enough effort to give themselves the chance to catch higher quality fish – myself included. I’ll share some of those lessons with you here. 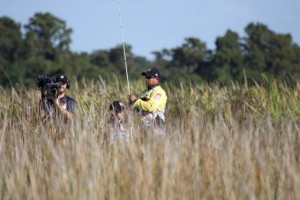 Deep Cover
Many of us fish lakes or rivers with cattails, bullrushes, reeds or tules. Myself, I get the opportunity to fish the California Delta and Clear Lake semi-regularly. I typically look for weeds that have unique features such as clumps or holes or points created by the edges. I also look for reeds that have some sort of mated vegetation near the edges. When I find that, I Flip into the cover on the edges with a Punching Rig or a jig.

Did you see the one word in those previous sentences that I repeated three times? Edges. Most of us don’t go deep enough into cover to present lures to fish. I’ve watched some of the world’s best anglers fish over the last couple of years fishing tour level events and at Major League Fishing, and one of the most surprising things has been how deep into cover they will go.

I’ve come to the conclusion that bass anglers have come to believe that bass are edge creatures and consequently, we stay to the edges. I’ve seen some of the greatest anglers in the world fishing so deep in reeds that the only thing I can see of them is their shoulders and above as they are Flippin’ deep in the reeds.

Target Mixtures
Bass like complexity. We’ve all learned that bass are simple creatures and a bass is a bass, no matter where he swims. However, when we start looking for ways to isolate where a bass would be positioned for Flippin’ it’s best to seek out complication.

When an angler is fishing a wall of reeds, or pads, they can spend all day flailing away at miles of cover without any response from the fish. What I’ve learned from watching and talking to these guys is that looking for small patches of mixed grasses will help narrow the search. 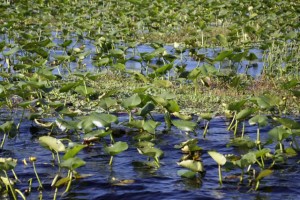 If you can locate areas where, two or three different types of grasses come together in one area, then there is a better chance for the angler to find heavy bass there. Whether it is the complexity of the cover, or the fact that it brings more bait together in one place, I don’t know. But, mixed vegetation certainly holds bass better than one type of vegetation on its own.

Slow Down
I’m convinced that I fish too fast when I’m Flippin’. I’m also convinced that a lot of anglers do. I watched some of the best Flippers in the world working at Chautauqua Lake in New York during the Major League Fishing event there, and some of them learned that they were fishing too fast.

Once you have figured out where the fish are living, slowing down and picking apart the cover will help you catch more fish. If we can figure out how the bass are positioned, then we can slow down and truly make fish bite. I heard a story about an angler making a pass down a dock that three others had fished in the last 30 minutes, and catching a four pounder that no one else had made bite. The secret? The other three anglers made four Flips on the dock, that angler made 18 Flips to individual posts, and got the bite.

Attention to Details
I learned two things this past year from Major League Fishing pros that they look for when Flippin’, water depth is key. How you find that water is by paying attention to small details.

Ish Monroe told me that he won the Elite Series event on Lake Okeechobee in Florida because he was fishing water that was deeper than his competitors. I assumed that meant he had found a ditch that was holding fish.
He said no. 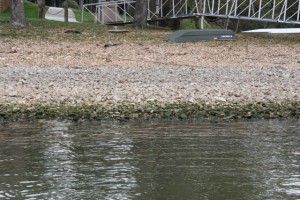 The deeper water that he was fishing was in the middle of abandoned tilapia beds. Tilapia create huge craters in the lakebed when they spawn, and some of them can be six to eight inches deeper than the water around it. Throw in a little bit of cover, and Monroe had his winning mixture.

Oklahoma pro Tommy Biffle said that he pays attention to the moss to see if the lake is rising or falling. Being from an area that doesn’t have a lot of natural lakes, we don’t get a lot of moss growing on shoreline cover. Biffle, however, does.

He figures out how much a lake falls by looking at the moss line on the back, and by any vertical cover that has moss on it. If he can figure out that there is two or four inches of green, wet moss at the edge of the lake, then the bass have likely not moved far. But, if that line is larger, then the bass may have moved out to different pieces of cover, and he can adjust.

All of these details can help us catch more bass with a Flippin’ Stick.