Memories In Honor Of

Without our memories, what do we have? I’d venture to say, not much.

I’ve been fortunate to have the opportunity in my career to capture a lot of my memories through a telephoto lens, and so my memories are visible for others to see. They also give me the chance to relive moments that I’ve experienced on the water with people that make our sport and our industry so colorful.

In honor of Memorial Day, I decided to share some of those moments with you since I began covering professional fishing tournaments. My first digitally available image (I used actual film until the middle of 2008) is of Gary Klein during the 2005 ESPN Great Outdoor Games. Since I went to digital imagery, I’ve amassed a catalog of nearly a terabyte of images, and I don’t often take the time to look at them.

Since Memorial Day is about remembering the veterans who have served this country, I decided that there was no better time to sift through my own memories and share some of them with the readers who make Advanced Angler so special.

So, take a little trip down memory lane with me, and allow me to tell you a story through my eyes – with my lens – and in my own words. 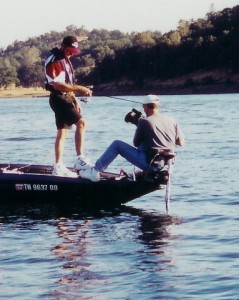 This image was taken at the 2005 Great Outdoor Games on Folsom Lake, near my home. This is cameraman Wes Miller seated atop the trolling motor bracket of the competition boat while Gary Klein explains what he is doing while he is fishing. Apologies for the graininess, this is a scan of of a developed print. 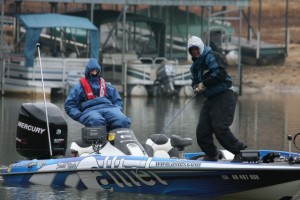 This is Scott Rook at the 2008 Bassmaster Classic fighting a five-pound bass on the first morning of the event. This is the first action shot I took of an angler at my first Bassmaster Classic. I was there on location with the crew at BASSZONE.com – Rook lost this bass moments after this shot was captured. 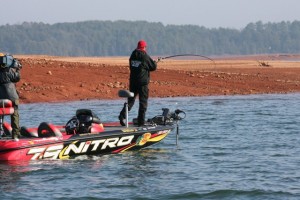 This is Kevin VanDam casting a crankbait on the second morning of the 2008 Bassmaster Classic. While I was shooting this image, my camera boat driver was busy counting the 52 spectator boats following VanDam. Moments after this, VanDam made a 30 mile run upriver to fish dirty water because of the clear water and light winds on the main lake.

Think these anglers push their boats to the limit? This is Skeet Reese going wide open at take off on day three of the 2008 Bassmaster Classic at Lake Hartwell in South Carolina. 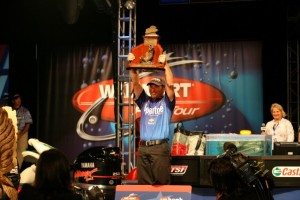 This is Brett Hite lifting his Lake Toho Trophy after winning the event. Again, I was on location for BASSZONE.com for the first three events of the FLW Tour season in 2008 while we were wating for Matt Pangrac to finish his degree at the University of Oklahoma so he could begin full time. Hite hooked up his rig and went 3000 miles to the California and won another $100,000 less than two weeks later at an FLW Series National Guard Western Divison event. 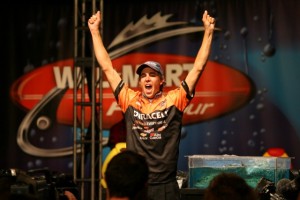 My second FLW Tour event of 2008 for the BASSZONE.com crew. I was there to watch Michael Bennett win his first tour victory. 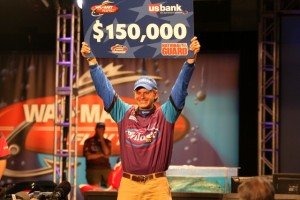 My third and final FLW Tour event of 2008 for BASSZONE.com. This is Sean hoernke celebrating his win. 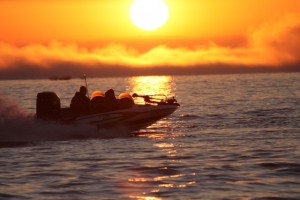 Summer of 2008 at a Future Pro Tour event in California, I am positioned on the western end of Franks Tract in the center of the California Delta looking east. This is one of my favorite images of my own of all time. 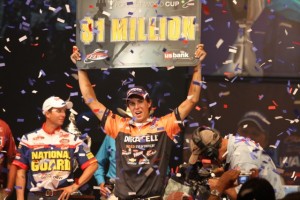 Michael Bennett rounding out his 2008 year with a cool $1million when he won the Forrest Wood Cup on Lake Murray in Columbia, S.C. 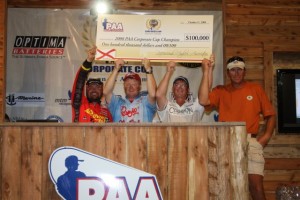 Greg Hackney and Mark Rose teamed up with their local partners to win the PAA Corporate Cup on Pickwick Lake in Florence, Ala. in October of 2008. 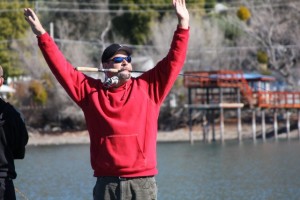 Mark Zona fighting a Clear Lake bass with his teeth while he was filming his then World’s Greatest Fishing Show with Skeet Reese in January of 2009. 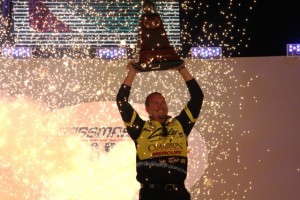 Skeet Reese lifting his Bassmaster Classic Championship trophy overhead at the Red River in Shreveport / Bossier City, la. I was on site for BASSZONE.com. 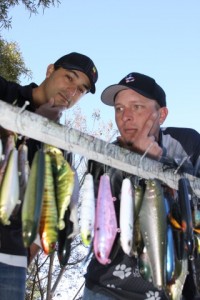 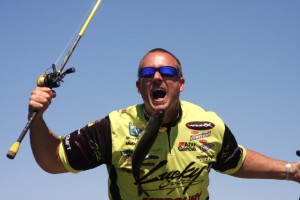 During a 2009 photo shoot with Skeet Reese with his new signature Wright & McGill Co. rods. His wife Kim and I talked him into holding a fish in his mouth for one segment, and when he released the fish, it created an interesting image – I call this one “When Animals Attack.” Who is the animal? I’ll let you choose. 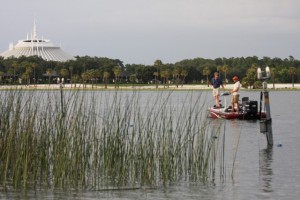 This was taken at the ICAST 2009 launch party of Lazer TroKar Hooks on the Disney Lakes in Orlando, Fla. The Magic Kingdom extends to under the water at these lakes. 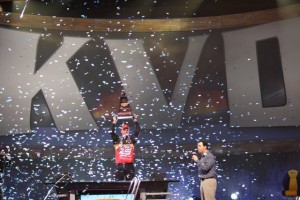 Kevin VanDam celebrating his 2010 Bassmaster Classic Championship on Lay Lake outside of Birmingham, Ala. 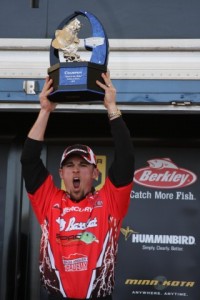 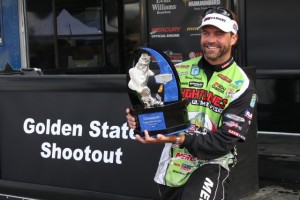 Byron Velvick with his trophy after winning the 2010 Golden State shootout on Clear Lake. 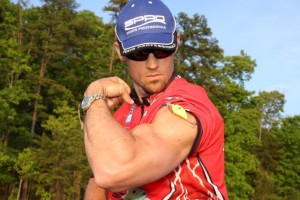 Taken at the 2010 SPRO, Big Bite Baits, Sunline and Gamakatsu Writer’s Conference at Lake Lanier, Ga. John Crews with one of his signature SPRO Little John crankbaits attached to his rather impressive deltoid like a tattoo. I named this one “Branded” and a vertical version of this became a cover image for an issue of Bass West USA Magazine. 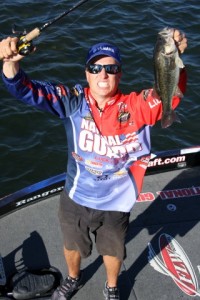 Another Bass West USA cover shot. This is Brent Ehler showing a little spunk on the California Delta in the summer of 2010. 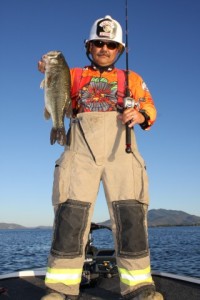 Former Elite Series pro Greg Gutierrez; a full time fire fighter in California posed with his fire fighting and professional angler gear for a cover photo for the November / December issue of Bass West USA. This was my final issue as Editor of the magazine before leaving to start Advanced Angler.com 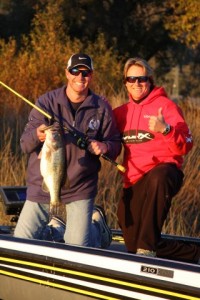 November 2010 with National League Cy Young Award winner Roy Halladay of the Philadelphia Phillies Major League Baseball Club and Elite Series pro Skeet Reese on Clear Lake. The Phillies gave the outing to Halladay as a gift for his perfect game earlier that year. This outing got me an assignment and the cover of Bassmaster Magazine. I could never have dreamed of getting a cover of Bassmaster. My favorite outdoor photojournalists Seigo Saito and James Overstreet are regulars there, and to have a photo in their category of Bassmaster covers is an honor. 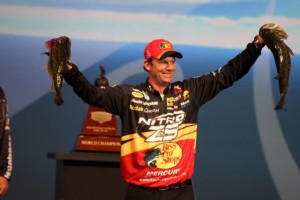 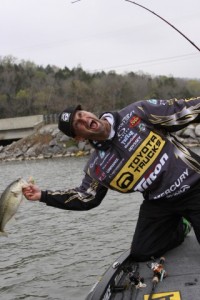 Gerald Swindle hamming it up for the camera on Lake Guntersville at the 2011 Toyota Trucks Writer’s Conference at Dream Ranch. 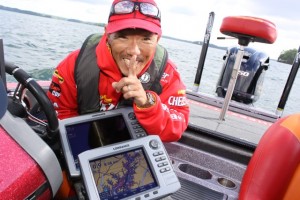 FLW Tour pro Shin Fukae showing off his two Lowrance HDS graphs that make up a part of his five units on his tour boat. This was taken at the SPRO, Big Bite Baits, Sunline and Gamakatsu Writer’s Conference at Lake Lanier, Ga. in 2011. 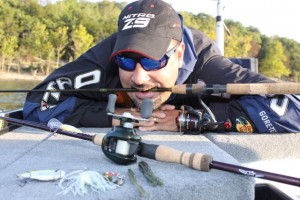 Mark Zona with yet another rod in his teeth at the 2011 Tracker Marine Media Days at Big Cedar Lodge on Table Rock lake in Missouri. I guess this guy as a thing for long toothpicks. 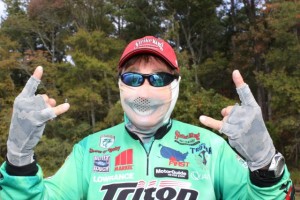 Shaw Grigsby with a custom, self likeness sun mask from his sponsors at SIMMS. The mask may be kind of creepy, but you can still see Shaw’s trademark smile behind it. 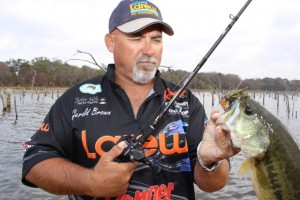 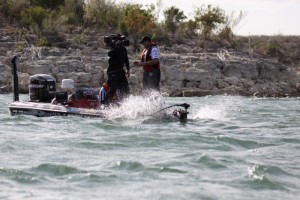 Mike McClelland becoming completely immersed in his work at the first Jack Links Major League Fishing Challenge Cup presented by Busch Beer event on Lake Amistad. I was fortunate enough to be an on the water photographer for the event, and is something I’ll always be proud to have been a part of. 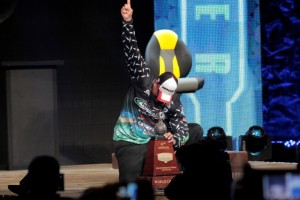 Chris Lane pointing to the heavens and thanking The Lord for blessing him with the 2012 Bassmaster Classic victory on the Red River in Shreveport / Bossier City, La.

These are a few of my favorite memories, here’s to hopefully sharing a lot more of them with you for amny more years to come.