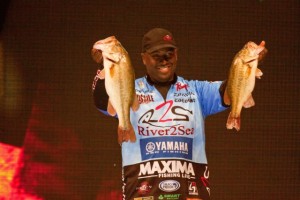 If there’s a notable difference between a tour level pro like Ish Monroe and the weekend warrior, it might not be any physical skills, technical know-how, or secret baits.

Instead, it might be the mental approach to the bass fishing game, the mind tricks that an angler uses to stay sharp, to stay focused, and to stay positive no matter what a day on the water may bring.

That was apparent to yours truly last fall before a round of competition at the Jack Link’s Major League Fishing tournament in Denton, Texas.

As I visited with Monroe about the upcoming day – the second morning after a strong cold front had passed through the region – I made a casual reference to the fact that the round’s fishing might be a bit on the tough side.

Especially since most North Texas lakes were fishing a bit on the moody side, the moon was overhead and full, chilly fall weather was in place, and a slick calm bluebird day was preparing to greet the MLF anglers.

In a polite manner, Monroe shrugged and basically said to me “So what?”

Because in the California pro’s sharp angling mind, the challenge remains the same every day.

And that’s going out and catching fish no matter what the conditions, enough bass to eventually win the day. 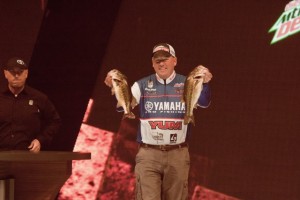 “If you get that in your head that it’s going to be a tough bite, then it is going to be tough,” said Monroe, a four-time winner on both the B.A.S.S. and FLW circuits.

In other words, negative thinking on the water eventually becomes a self-fulfilling prophecy.

And in professional angling – especially at the tour level – that’s a bad thing.

Mind you, we’re not talking total cerebral mumbo jumbo here – there has to be at least some skill and technical expertise present for an angler to be successful.

Not to mention tossing the right lures into the water where bass are lurking.

“The physical and technical aspects of it (bass fishing) have to be there also – you can’t just think your way into a bunch of fish,” said Alton Jones, the 2008 Bassmaster Classic champ from Waco, Texas.

“I think the mental aspect allows you to complete the physical part. It’s important to be a good caster, but I can’t go brain dead and let it happen on its own. I have to consciously think about it on every cast, throwing at a specific target so my spinnerbait goes past the log and comes by at the right speed, the right position, the right depth, etc.”

Jones believes that for him, fishing success even goes a step beyond the development of the physical and mental skills that lead to success on the water.
As a dedicated man of Christian faith, he points to his spiritual life as a primary source of those skills and the inner confidence that have helped propel him towards the upper echelon of professional bass fishing.

“I’m working for something bigger in this universe than just me,” said Jones. “I feel like God has put me in this world to fish. 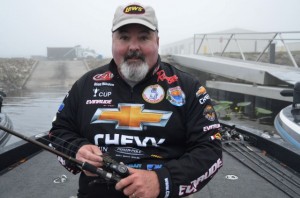 “It’s my platform to share my faith in Christ with others. We have what God’s given us, nothing more, nothing less. He’s given me the ability to fish and I want to do a good job for Him and to be a good steward with that gift.”

So what does this mean for you and me, the ordinary weekend angler hoping to catch more and bigger bass, and perhaps, to even win a local club tournament?

That mental strength on the water, while not a cure-all, is one of the most important attributes that an angler can pack into his tackle bag for each day.

Dion Hibdon, the Missouri pro who owns the 1997 Classic title and the 2000 FLW Forrest Wood Cup, says one way to stay strong mentally is to remember to dance with the one that “brung you.”
“My dad (Guido) and Denny (Brauer), they would tell me that you’ll never win a tournament at something that you’re not good at,” said Hibdon. “I’ve won two world championships and they were both won by doing something that I think I’m as good at as anyone in the world.

“At the Bassmaster Classic and the FLW Championship, I was throwing a jig in a situation that I think I’m as good at as anyone slinging a lure in the lake.”

Put simply, when the pressure is on, it’s often a wise idea to stick with the techniques you have the most confidence in.

“I try to fish (to) my strengths, to put myself into areas that allow my strengths to come into play,” said Klein. “But most important, I fish for fish that I understand.” 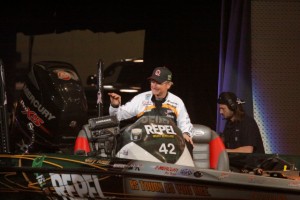 Meaning that an angler not only knows that a group of fish are in a certain spot, but that he also knows also knows why they are there, what is making them tick on that particular day, and how he can get them to bite.

Such knowledge can help a weekend warrior stay focused on the water, especially on tough days when strikes are few and far between.

“That’s when it’s hard to keep the focus,” said Jones. “If it’s a cold, windy day and you have not had a strike in four hours, it’s easy to be thinking about hot chocolate.

“But it’s very important to stay focused then. Since you’ll have fewer bites on a tough day, you have to capitalize when the strike comes. And not being focused keeps an angler from making the proper presentation to get that strike, too.”

And getting that strike – by having the physical skills necessary and by playing the mental game properly – is what bass fishing is ultimately all about.

Whether you’re fishing in angling’s Major Leagues for a world championship. Or you’re simply spending a hard earned day off on the water, hoping to feel the strong tug of a giant bucketmouth bass.