Kevin VanDam sat alone on the front deck of his boat in a less-than-glamorous hotel parking lot making final tackle preparations for Lake Dardanelle with a Waffle House sign as the only bright spot among a ceiling of grey clouds overhead.

There’s nothing gloomy about VanDam’s attitude though. “I like this place,” he volunteered with a warm upbeat delivery as cold rain tried to spit on a scattering of Quantum rods and reels spread about his boat.

“It’s real diverse, Dardanelle has something for everybody,” says VanDam. “It’s got a lot of different types of habitat, featuring tons of shallow water situations, all the way to deep cranking, and river current too.”

VanDam should have good vibes about this section of the Arkansas River; after all, he finished in 2nd Place here in late March of 2009.

“That tournament in 2009 was all about the spawn,” remembers VanDam. “Most of the fish I caught then were spawning real shallow around big stumps, this week they’re in more of an early summer pattern.” 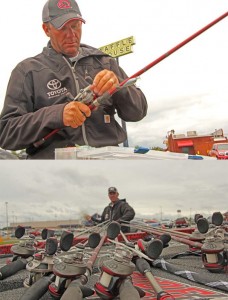 Weather played a major role in the 2009 event here. Fog delayed anglers several hours on Day One, and Day Three was completely cancelled because of dangerously high winds.

This week, it’s rain, coupled with potentially record low temps for mid-May, that caused anglers to shiver miserably during practice, and carry wool-like Carhartt caps into Day One of competition as sunrise temps hover around 40-degrees.

Still, VanDam feels good. “No matter what the weather is here, whether it’s cold and rainy, or slick calm and sunny, you can always find a pattern that’ll work here.”

So far, VanDam says the rains haven’t muddied the bite.

The biggest challenge he and the rest of this Elite Series field face is keeping up with drastically fluctuating water levels. “They dropped the bottom out of it during Tuesday’s practice, and let it come way back up on Wednesday, it seems like it goes up and down as much as two feet from one day to the next.”

Mark Menendez won with 55-pounds in the weather shortened 3-day event here in 2009, that’s 18 pounds per day – and VanDam thinks it will be every bit that strong this time around.

No matter the weather, no matter the water levels, one thing’s for sure – VanDam likes this place – and that’s the first step to a winning weight – with desire spotlighted best by the glow of a Waffle House sign high in the cold cloudy air above.