The postspawn period can be one of the more frustrating times of the year to fish. The lethargic nature of exhausted bass is one reason. But when you couple their lack of enthusiasm with the fact that you saw them when they were spawning, and can sometimes still see them now is enough to drive an angler insane. 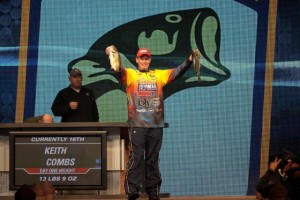 While many of these bass can be seen sunning themselves in bushes or around shallow docks, they can be spooky and very difficult to catch. The thought of tossing weightless worms all day hoping for a few bites might seem the only choice for the day. But, for anglers who prefer to bow through areas searching for active fish, that might as well be a jail cell.

“I prefer to be able to cover water whenever possible,” said Combs. “Whenever possible, I try to make bass react to moving baits because it keeps my interest, but it also helps me put the lure in front of more fish, and get larger strikes.”

Combs’ favorite postspawn tool is a crankbait, and he takes advantage of the bass’ nature in his approach

Start Shallow
Like most good anglers, Combs has a system for getting the most out of his day. This time of the year his system usually starts by targeting the shad spawn. The shad spawn occurs towards the end of the bass spawn, when the water reaches the 70-degree mark. Shad will spend the overnight hours and the first couple of hours in the morning broadcast spawning around hard areas of the lake.

Anglers often seek rocky banks or areas with a lot of wood or floating docks to target postspawn bass seeking to take advantage of the rolling, boiling activity on the surface. Anglers use many types of lures to trigger strikes; Combs prefers a squarebill crankbait.

“The squarebill gives me the ability to cover water quickly and allows me to fish a variety of cover,” he said. “I only have until nine o’clock in the morning, and I need to move fast to get the most out of the morning bite.

He starts with shad colored Strike King KVD 2.5 squarebill crankbaits, and he matches them to 15-pound-testSeaguar AbrazX fluorocarbon line and a 7′ Power Tackle PGC170 crankbait rod with a 7.3:1 retrieve speed reel. “The key is to move really fast and hit as many hard targets as possible,” said Combs. “I keep the trolling motor on high and I’m burning through as many hard target areas as I can; until I get a bite.” 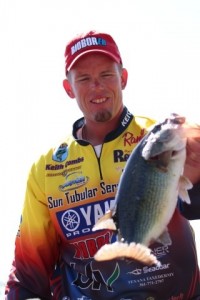 Once he gets a bite, he slows down and tries to pick the area apart. “I really look to make contact with as many objects in the water as possible,” he said. “By doing that, I am making the bait look different and out of the norm to a bass; which is important when there is so much food around.”

Transition
Once the morning rush is over, Combs said he turns to transition areas in search of isolated bass. The areas he turns toward are those just off the spawning areas, and unlike the morning, he isn’t looking for groups of bass, he is looking for the lone wolf.

“I spend a lot of time in practice seeking out little isolated pieces of cover on points in eight to ten feet of water,” he said. “I look on the GPS mapping on my Humminbird and locate points with good steep drop offs near deeper water. Once I find those I use my Side Imaging to locate isolated rocks and brush that will hold bigger females.”Once he locates them, he waypoints them and makes a plan to return during the tournament.

He arms himself with Strike King 5XD crankbaits and makes long casts past the cover on the point hoping to make contact with the isolated with where his target might be waiting in ambush. He uses the same rod and reel as he does for his squarebill approach, but he changes the size of his line depending on the depth of the point. “I’ll use 10 to 15-pound-test Seaguar AbrazX line,” he said. “I won’t go lower than 10, but that gives me the maximum depth out of the 5XD.”

Choosing Colors
Combs said that he tries to stay with shad colors for his crankbaits regardless of the approach this time of the year. “I really like Tennessee Shad and Sexy Shad in clear to stained water,” he said. “But, I will also go with Powder Blue and Chartreuse if I need to get a little more visibility.”

His one exception is if he feels there is too much bait in the shallows, then he will turn to crawdad colored squarebills to try and make bass notice something a little different. 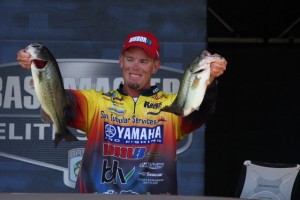 Maximize Opportunity
The biggest pieces of advice that Combs said he would offer any angler looking to capitalize on crankbait fishing in the postspawn are boat positioning and using speed to their advantage.

“I see a lot of anglers kind of haphazardly going down a bank missing a lot when they are shallow cranking,” he said. “Try to use the boat to make sure you are coming into contact with cover. Put it tight to the bank and retrieve it uphill, or line up to objects so that the lure has to contact the shallow cover frequently.”

“Their need to feed is the most powerful tool you have, use the crankbait’s ability to deflect off of cover and you will be able to maximize your efficiency on the water.”