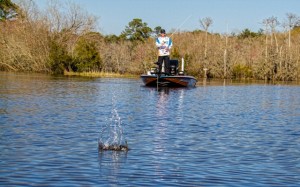 For many bass anglers in several regions throughout the country, fishing current is a foreign occurrence.  Many areas don’t have the kinds f river systems that offer anglers the chance to fish in heavy current.  Most anglers spend their time on some sort of reservoir or natural bodies of water, and battling current in search of river monsters is something we just don’t get a chance to do.

Being a resident of Georgia, this fourth year Elite Series pro spent much of his early life fishing the rivers near home, and he has been guiding on the Flint River and Lake Seminole out of Bainbridge, Ga. for more than 15 years for shoal, largemouth and spotted bass.

That experience has taught him how to handle a boat, and a bait in stiff current.  “I usually fish the Flint River in my tunnel hull boat,” he said.  “But, the things I’ve learned have helped me handle my fiberglass Phoenix Boat in rivers as well.”

Major Key to Fishing Current
Tucker said that the first component to being successful fishing on a body of water with heavy current is boat control.  While boat positioning is key on any body of water, on a fast moving river, it can be the difference between effective fishing and a damaged boat. 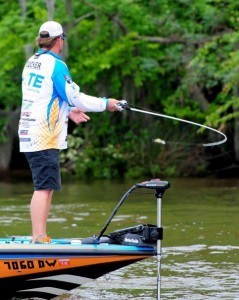 “Most people fight the current trying to go into it, and by trying to hold onto one spot in it,” he said.  “Their other method is to drift with it, and when you’re going that fast, you can’t fish effectively.”  He recommends that anglers drift backwards, using the trolling motor to steer and slow the drift rather than trying to fight the current.

“I fish with my bow into the current because allowing the current to push against the transom is too tricky; you can lose control of the back end of the boat quickly,” he said.  “I use the trolling motor on a little less than high speed and use it to slow the drift and steer while fishing. This gives me more control, and saves on battery power as well.”

He also said that his Power Poles have been a big help in being more efficient in the current.  “Being able to anchor the boat in position certainly helps,” he said.  “It helps with fishing, culling and even tying on, they have become a tool I can’t fish without.”

Of course, that is when he cannot locate bass in the chutes and eddies around shoals and current breaks.  Whenever possible, Tucker likes to sit in the eddies created by current breaks and target bass that are sitting at the top of the shoals, or those sitting in the tailrace of it.

Current Gear
While control of the vessel is the primary factor for consideration, Tucker knows that casting and retrieving is almost as important; for, without hook and line, one does not catch many fish.  Working a lure of any type is challenging, and one tactic that  Tucker has found productive is using a heavy jig with a swimbait as a trailer.

He likes to use a 1/2 to 3/4-ounce Eco Pro Tungsten Heavyweight Football Jig, which he modifies by changing to  white skirt and trimming the skirt short around the hook bend.  He then threads a swimbait, either a Skinny Dipper style, hollow bodied paddletail or even a Big Hammer boot tail onto the shank.  In his mind, this combination mimics a large baitfish, and the skirt adds bulk to attract fish in current.  The football head helps reduce snags, and gives the swimbait some attractive “body wobbling” action as well. 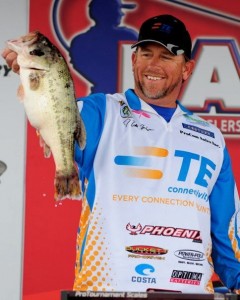 He rigs this lure on a 7’11” Duckett Fishing White Ice Byron Velvick Swimbait / A-Rig rod.  He pairs the rod with a 7.3:1 retrieve reel, which is spooled with 20-pound-test fluorocarbon line.

The setup is strategic.  “The extra rod length and high speed reel help me gather line quickly to set the hook,” he said.  “Between the current, and the way fish strike, I need all the help I can get.”

The current tends to create bows in the line which he needs to get out of the water to set the hook, and fish typically hit a swimbait from behind; pushing the bait towards you, so the high speed reel helps here.  The heavy line is used to be able to lift fish into the boat so that he doesn’t have to drift so far in landing them.  “That’s a matter of necessity more than anything,” he said.

As far as colors, Tucker tries to match the hatch with the prevalent baitfish as much as possible.  So, he lets water color dictate his final color choices.  “Most of the time, shad or another baitfish will be what they are eating,” he said.  “I use Pearl White in dirty water and Hologram Shad  or Blue Gizzard Shad colors in cleaner water.”

Current Retrieves
Tucker tries to cast the lure upstream and maintain contact with the lure as much as possible. In order to do that he makes a cast and lets the lure start to drift with the current, he holds his rod tip upwards at a 45-degree angle and reels only enough to stay in touch with the lure.  “I am not trying to power the lure through the water, only feathering it along and keeping it moving,” he said.  “The jig will fall along the current, ticking rocks and give the fish a chance to strike as it passes by.”

His other favorite technique is tightlining.  Here he casts downstream, hold the bait in the current and lets the water flow manipulate the lure.  “I use this a lot when fish are holding on tailraces of shoals,” he said.  “I can leave the lure in one place and let it work over the top of the bass; it really works well.” 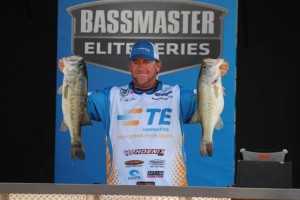 Final Thoughts
Tucker said he has to give credit to an Elite Series colleague for opening his eyes to the technique.  “Fred Roumbanis showed me this combo as an alternative to big flutter spoons,” he said.  “I saw how effective it was there, and just applied it in current.”

He said he has some advice for anglers willing to try fishing in current.  “It can take a pretty good amount of guts to run into the river sections and fish current,” he said.  “There are big boulders up there and things that can damage boats.

“Make sure your insurance is paid up and learn to navigate rivers,” he said with a chuckle.  “Once you do, you’ll be able to catch fish that other anglers can only dream of on a consistent basis.”