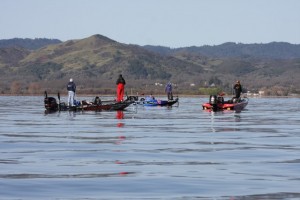 Grant Goldbeck Fishing in a Crowd – photo by Dan O’Sullivan

With the quality of today’s electronics and the popularity of bass fishing on the rise, it’s getting harder and harder to find fish you will have all to yourself. As a matter of fact it is quite common to have several boats around you when you pull up to your spot. Sharing water isn’t the end of the world; it just takes a little more work to get the job done.

Every area always has a sweet spot, possibly more than one. Taking some extra time to figure out where these specific casts are can be beneficial and very crucial to your success. For example a couple springs ago while fishing the Bassmaster Elite Series event on Clear Lake, I had company at all times.

One of the two spots I was camping out on was a staging area with a hard rocky bottom. There were many boats that came through in the course of each tournament day, some of which stayed all day and struggled for numbers and quality of bites. I put a little extra time in during practice in this area and found a subtle ditch leading to the rock pile.

It wasn’t an obvious ditch just about a two foot difference in depth and about six feet wide. This was the highway being used from deeper water to the rocky staging area. First thing in the morning I would catch what I could off the rock pile right away. After I got what I could, I would pull back off and intercept most of the fish that were using this ditch to move onto the rocks. There were boats all day 30 yards from me fishing these rocks but I would catch about five fish to their combined one.

Sometimes you can’t hold down a sweet spot to yourself and end up fishing for fish that are seeing baits going by them all day. These crowded areas can get frustrating. I like to fish confidence baits at these times, but also baits I know I will be the only one throwing. I look at these areas just as I would look when fishing behind somebody or getting the second cast on the back of someone’s boat.

I observe all the other boats and adjust by using something different. I tend to use lighter line, sometimes even going down to five-pound-test fluorocarbon. I like the smaller diameter of fluorocarbon without giving up strength and still keeping great abrasion resistance. An Xcite Baits  Slim X worm wacky rigged on a wacky head works really well on pressured fish. I throw this rig on a spinning rod and reel.

While downsizing is the first adjustment, there are a lot of times that these pressured areas don’t need downsizing and you can do well going the opposite way and showing them a big bait. The key here is to get these fish moving and not just watching baits go by them. I always keep a big worm tied on something with a lot of action.  I like an Xcite Baits 10-inch Maximus straight tail worm. It is a very versatile worm that can be fished a lot of ways. It floats on a Carolina rig or a split shot rig very well. It also can be Texas rigged and puts out a ton of action like no other when shaken. The formula put in the plastic of these worm is different than any other hand poured worm. 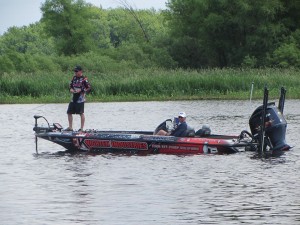 A jig is also a go-to for me and I like to keep my jig moving in these situations. Most fisherman will shake their jig or hop it and pause it. I feel the fish just watch it go by time after time. The key here is to get the school moving and taking them from a negative mood to being positive.

To do this I slow crank my jig with the rod tip up slowly turning the handle with no pause. By keeping it moving I find the fish have to make a quick decision before the bait is gone. It seems to get them up off the bottom and moving. I keep the rod tip up so that when I do get bit I can quickly lower the rod and give myself a second to set the hook before the fish feels the rod. I use a 1/2 oz. jig typically with brown rubber skirt. At times to maintain good bottom contact I will move up to a 3/4 oz. jig when cranking it. These two sizes will cover most situations.

There generally seems to be a lot of times throughout the day when it can get really slow in these types of areas. I will always keep a swimbait tied on for these slow times. The swimbait can be a great bait and switch tool. When it has been slow and I have not gotten a bite in a while but I know the fish are still there, the swimbait can get them wake them up sometimes.

Going back to the Clear Lake tournament, there would be times where I would make 20-30 casts without a bite. I would then pick up a swimbait and make a cast through them, then follow up with a wacky head and catch eight to ten fish in a row. I know Sounds crazy but it worked for three tournament days of highly pressured fish. There are a lot of times they won’t eat a swimbait but they can always be used as a tool. 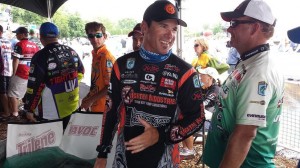 The last but I believe most important thing when fishing in a crowd, is to keep your head in the game. There will usually be a couple fishermen getting heated up on the crowded area; let them argue, because they most likely will take themselves out. I try to put on the blinders and ignore all of the boats around me by concentrating on the fish I need to catch and doing my thing.

If the other anglers want to talk a bunch an iPod works great just as it does in poker, eliminating anything that could get your head out of the game in what could potentially be a stressful situation. Staying focused will put more fish in the boat and allow you to think the day through at each moment changing with the fish.

Sometimes you have to fish these crowded areas to even be competitive in the tournament. It can be the best area on the water that week, and not going to it because of the traffic can be a mistake. A few adjustments in tackle and mentally preparing yourself for company can really make the difference; it has for me.