From now through the fall, anglers will always be on the lookout for that moment when the cover and water conditions are so perfect that tossing a topwater plug is the only thing they would even think about doing. With the right blend of cover elements, water conditions and the presence of baitfish, topwater is a fantastic choice. 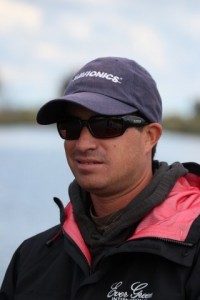 The other thing that sends anglers over the top is the sight of baitfish erupting on the surface as they are being chased by predators. Having a streamlined topwater bait at the ready gives anglers the chance to capitalize on the aggressive nature of chasing bass.

It’s topwater time all over the land, and former FLW Tour Rookie of the Year Justin Kerr knows that as well as anyone. One of his favorite baits to target topwater bass is a pencil popper, and his favorite version is the Evergreen Showerblows.

“It got its name because of the amount of commotion it makes on the surface,” Kerr said. “It has a great profile and an action that really makes bass react aggressively; I love a good pencil popper bite.”

When to Go Pencil
Kerr said that he has one tied up most of the time he is fishing for topwater bass. He said that the combination of the bulky size and the action of the lure give him a chance at larger than average fish. But, he did say that he has preferences for when it seems to have the best response.

“I really like it in summer storms and again in the fall when the storm fronts blow through,” he said. “Those afternoon fronts that hit in the south are great times to toss it, and again in the fall when the rainstorms get going.”
But, he also said it wasn’t just any type of storm, his preference is rainy weather without a lot of wind. “They work in water with a little chop, but they call bass to them in calmer water,” he said. “The calmer the water, the more I can make it slash and throw water everywhere – that makes bass respond.”

Outside of his absolutely favorite times to toss the Showerblows, he said he uses it when fish are schooling, when the herring run on Southeastern lakes and when bream are spawning heavily. “All of those are great times to use it,” he said. “It casts like a bullet for schoolies and makes so much commotion around bream beds that bass can’t resist.”

He said it is great for making casts to isolated targets, but it is especially productive over shallow flats. “I really like to make long casts over shallow flats and cover a bunch of water with it,” he said. “It really calls fish to it, so I can cover water and really see where they are located.” 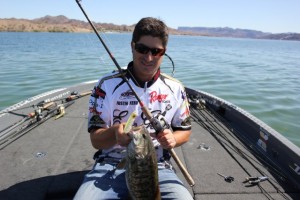 How to work the Pencil
Kerr said that the Showerblows is similar to any walking bait on the market, but it has advantages. He said that its aggressively cupped face makes the bait make more side to side movements in a shorter distance than other baits. “If I get the cadence going really well, I can make it walk side to side 10 times in three feet,” he said. “Each time it does, it creates a big shower of water that attracts attention.”

Gear Up for Pencil Pushing
Kerr said the gear for tossing a pencil popper is best when it’s stout. He prefers to throw it on Bass Seil PE Frog and Flip Braid from Evergreen. But, because the bait slashes so aggressively, he ties a leader of 16 to 20 pound test Bass Seil Flex R monofilament line with a double uni splice knot. “I need the leader to be a little stiffer so that the bait doesn’t tangle so much,” he said. “Otherwise, I would only get to cover a little bit of my cast, and I would have to bring it in to untangle it.”

He uses a heavy rod; an Evergreen Heracles Strike Master 77 to be exact. The rd is a 7’7″ medium heavy action rod with solid backbone and a little tip for making long casts and working the bait properly. He pairs it with a high speed, 7.1:1 reel so that he can pick up the slack and make a solid hookset when a fish strikes at a distance.

Colored Pencils
Kerr siad that he really has two favorites that he relies on depending on the season. If he is fishing near bream beds, then a color that mimics bluegill is the first choice. But, he usually finds himself selecting a clear bait with chartreuse back for most other times. 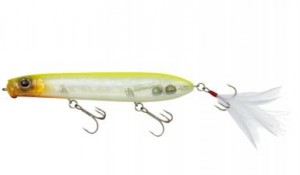 “The Baby Gill is good for the bream beds,” he said. “But, the Skelton Chartreuse color really does great most of the time. I really believe it mimics a shad, or any other kind of baitfish that bass are chasing. Those are my two favorite patterns to throw.”

Sharpen Your Pencil Skills
The biggest thing that Kerr suggested was that anglers try to make the bait glide too much. “It’s best when you can really hammer it and get it slashing back and forth with a lot of rapid motions in a short distance,” he said. “You do that by really working the slack in the line more than you do the lure.

“It takes a little practice, but when you get it down, you can make the bait turn nearly 180-degrees and draw a lot of attention from the fish,” he said. The key is to keep it in the strike zone as long as possible, but still making aggressive movements with the bait. That’s where the Showerblows shines.”