Bass fishermen are tinkerers. Whether adding a couple of suspendots to a jerkbait or dipping the tail of a brush hog in some chartreuse dye to get just the right look, bass maniacs have always attempted to apply their unique style to the sport. 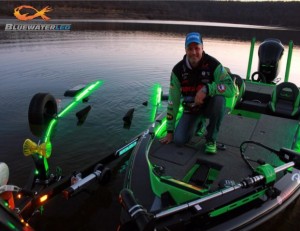 In recent years however, tinkering has expanded rapidly out of the rod, reel, and lure arena and into angler’s boats and tow-vehicles. Pro anglers are given free rein to design their jerseys, boat wraps, and tow-vehicles to best represent their sponsors and individual personalities, making a trip to a tour-level event these days a spectacle reminiscent of P.T. Barnum.

There are a million things an angler can do to put his or her personal touches on their rig, and Bassmaster Elite Series angler Scott Ashmore has experience with most. Since he joined the Elites in 2010, Ashmore has been a pioneer in tricking out boats. He was the first to integrate an Ipad into his dash, and his vivid wrap designs and bold color choices were unique on the tour until very recently.

One particular accessory Ashmore has helped pioneer is the integration of LED lighting, something that until a couple years ago only a handful of anglers were doing. “I started doing the lighting thing about four years ago, and there weren’t really any others on the tour that were doing it. Now, I’m pretty sure every angler out there has at least some LED lighting somewhere on their boat, and several boat manufacturers are now offering it as an option.”

Ashmore’s gets his LEDs from his title sponsor, Blue Water LED. Blue Water LED is a pioneer in the development and installation of high performance LED lighting systems for a variety of outdoor industries including boats, trucks, motorcycles, and atv’s.

To Ashmore, LEDs are a no brainer over previous lighting options. “LEDs are brighter, waterproof, never need new bulbs, and draw an insignificant amount of current to run. They obviously do a great job lighting just about any space, but they also increase your on-water visibility and make low-light and nighttime operation safer.”

As great as it would be if we could all afford to install LED lighting on every square inch of our boats like an Elite Series Pro, but the reality is; most of us are working on limited budgets. To that end, I recently caught up with Ashmore and asked him to make an “LED Priority List”, of the five places he recommends installing LEDs to not only look great, but increase your safety and efficiency on the water. 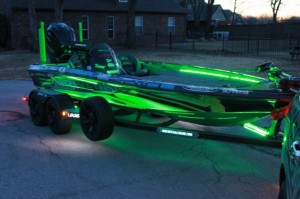 Blue Water LED is an American owned, faith based company located in Kentucky, right in the center of bass country. Their LED lighting and accessories come with an industry exclusive lifetime warranty, the only dimmable system components, and they will go out of their way to create a custom lighting system for any application. Pre-selected LED kits are available at many retailers, but their entire catalog can be seen at www.bluewaterled.com