Get Bites When it Gets Tough

Tournament anglers are always on the search for the best way to get “more and bigger bites.” The concept is a good one for those trying to win a tournament, qualify for a year-end championship or win their Angler of the Year title.
However many anglers there are out there who compete, and spend thousands of dollars every year searching for the edge over their competition; there are dozens more who would like nothing more than to catch a bass. There are also many who would like to learn how to upgrade from catching a few to catching a limit.

The hardcore tournament angler is rarely satisfied with merely catching a limit, and if he were only to catch two or three bass, he would likely try to explain it away as “I was going for broke, swinging for the fences…”
However, fishing is more than that. Fishing is the pursuit of testing your own will and intellect against the will and need of a bass. Every day we hit the water we are entering a competition; but, while many enter official tournaments, most compete with the fish exclusively. 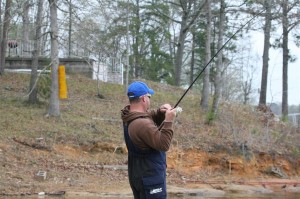 Catching a limit of is often the goal, and while we all like to catch the biggest one that swims, the truth is, we can’t catch a big one until we start getting bites. World famous bass pro Larry Nixon excelled at a unique major tournament format called Megabucks. The final round of Megabucks put anglers on a section of a lake that had not been fished by the competitors prior to the last round and the anglers were made to fish defined areas; called holes, of the course in timed periods.

When the 50 minute period was over, anglers would rotate holes. Each of the holes was unique and anglers had to try and figure out a strange body of water with less than an hour to fish it before moving on. Nixon won four Megabucks tournaments; which at the time was the highest paid winning purse in the sport; the four of them earned him more than $360,000 in cash and prizes.
He did it by fishing simple. While doing an interview for another article with Nixon several years ago, he told me that he merely did what his “Daddy taught him to do many years ago – just catch a bass.”

What does, “just catching a bass” look like? When other anglers are out on hyper-selective, pinpoint pieces of structure wearing them out on a crankbait, what can you do?

The answer is – get a bite.

Think Fishy
Nixon revealed that his key was to find the most “bassy looking piece of cover and just try to put a bass in the boat.” His theory, as he described it was as simple as finding the area of the water he was fishing and throw a lure on that spot that he knew would get a bite.

For Nixon, the simplest and most effective way to accomplish that task was to throw a Texas Rigged soft plastic worm. That approach is still wildly effective today, and there are several different ways to rig a worm that will help an anglers accomplish the task of “getting a bite.” 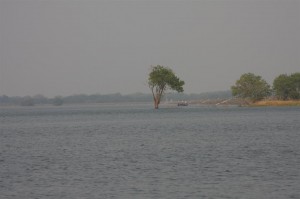 Look at the Water
While tournament pros have any number of variables to find winning bass, the purpose for this article today is to keep it simple. For keeping with the late summer to early fall season, the best place to look is on main lake points heading into major creek arms. As the water begins to cool this time of the year, shad will begin to swim upstream into the cooler water upriver. Once they begin to make that run, the bass; looking for an easy meal, will follow.

When that begins to happen, the majority of bass will leave their main lake haunts and begin searching for places to ambush baitfish that are migrating upstream. The most obvious places to take up that ambush position are points along the main river. The earlier in the season, the closer to the main lake they will be, so finding obvious points on the main lake and inside the main creek arms should provide you places to start finding bass.

Three Simple Rigs
The styles and types of soft plastic baits can almost be dizzying. Curl tails, ribbon tails, tubes, craws creature baits, minnows, finesse worms ring worms, reapers, grubs and the list goes on, and on, and on. There are so many styles to choose from, but for the sake of this discussion, lets’ keep it simple and choose a 6” straight tailed worm like a Berkley Finesse Worm.

We’ll also try to keep the color choices simple. If we are fishing clear water, then we would use an Oxblood with red flake, if the water is stained we’d darken it up a bit to a Watermelon Magic with Red Flake or Triple Margarita color.

The fastest way to begin locating biting bass would be to start with a Carolina Rig. The Carolina Rig gives the angler a heavier setup, which allows him to cover water quicker, but gives the fish a somewhat finesse presentation because the worm trails behind the sinker by 18 to 36 inches. 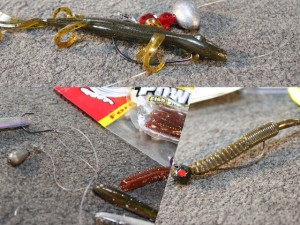 Fish the Carolina Rig by making long casts and gently sweeping your rod sideways to pull the bait along the bottom. If you come into contact with cover on the bottom that hangs up your sinker, slow down and fish more methodically, because bass often relate to changes in the bottom composition.

If the Carolina Rig isn’t your speed, and you prefer to slow down more with light tackle, then a Shaky Head Rig may be better for you. Fishing a Shaky Head is usually done on spinning tackle and light line. The worm is rigged weedless on a lead head jig, and it can be fished across a variety of cover.

Try making as long a cast as possible to the point and use your rod tip to subtly drag the lure back towards the boat pausing to pick up slack with the reel handle. Again, if you come into contact with something different on the bottom, slow down and shake the worm in place for longer periods of time.

Finally, a dropshot rig can also be an excellent tool, because it suspends the worm off of the bottom and puts it in front of the fish if they are not holding tight to the bottom. Use light tackle like you would with the Shaky Head rig, but the weight will be attached to a drop leader, and will really serve as your eyes under water. If you find that you are catching bass in the same place cast after cast, then try moving directly above those fish and dropping a dropshot rig on them vertically can be a very effective way to catch bass.

Have Fun
Even among the most highly skilled tournament professionals, they find times that they have to slow down and just try to catch a fish to start figuring things out again. It’s not surprising to see many of them stop and pick up a panic rod from time to time and do exactly as we’ve described above. 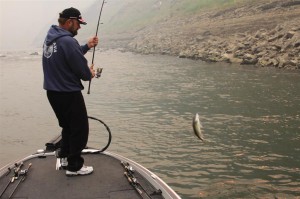 For the sake of improving your own fish catch ratios, for teaching a newcomer to the sport, or even instructing a child how to fish; there are no better ways than to use a soft plastic worm. But, even on a day that you just want to go out and have fun and catch a few bass, a simple approach with one of these rigs can make for an incredibly enjoyable day.