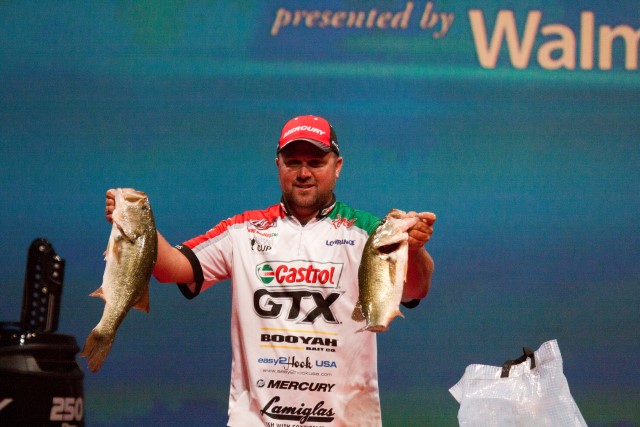 COLUMBIA, S.C. (Aug. 14, 2014) – Forty-five of the best professional bass anglers from across the country began their four-day competition for a top cash award of $500,000 at the Forrest Wood Cup presented by Walmart, the world championship of bass fishing, at Lake Murray in Columbia, S.C. on Thursday.

“I’m on par with what I thought I would need,” said Dudley, the 2003 Forrest Wood Cup champion. “I ended up getting some quality bites today, but it’s still a grind. This is a great lake with a lot of fish in it, but this time of the year it is tough fishing everywhere.”

Dudley said that he boated seven keeper bass throughout the day, but it was sporadic and he seemed to catch about one fish an hour. He said that he caught his fish on three different baits, but was not ready to divulge any specifics.

“If you look back at past Cup history, the tournament is usually won by someone who brings in a giant bag,” Dudley said. “Randall Tharp had a giant bag last year. Jacob Wheeler had a giant bag the year before. If a guy can do that, then go into survival mode for the rest of the tournament and weigh in solid limits, they have a good shot of winning. That’s what I hope to do.

The top 20 pros after day one on Lake Murray are:

Bryan New of Belmont, N.C., leads the co-angler division with four bass weighing 7 pounds, 9 ounces followed by Chris Burgan of Minneapolis, Minn., in second place with one bass weighing 5 pounds, 4 ounces. Co-anglers are fishing for a top award of $50,000.

A full list of results can be found at FLWOutdoors.com.

Anglers will take off from Dreher Island State Park located at 3677 State Park Road in Prosperity, S.C., at 7 a.m. each morning. Weigh-ins will be held at the Colonial Life Arena located at 801 Lincoln St. in Columbia, S.C., beginning at 5 p.m. daily.

Fans will be treated to the FLW Expo at the Columbia Metropolitan Convention Center located at 1101 Lincoln St. in Columbia, S.C., on Friday, Saturday and Sunday from 10 a.m. to 4:30 p.m. prior to the weigh-ins. The Expo includes Ranger boat simulators, the Chevy Truck Tour, the opportunity to interact with professional anglers, enjoy games, activities and giveaways provided by more than 40 sponsors, shop the latest tackle and outdoor gear, and learn more about the sport from more than 100 exhibitors. All activities are free and open to the public.

FLW has teamed up with the South Carolina Barbeque Association to feature the “Bass & BBQ” festival presented by The State. Fans enjoying the FLW Expo can sample barbeque from 35 of the state’s top barbeque teams Saturday and purchase their favorites directly from the teams Sunday. Five dollars will get you five 2-ounce samples on Saturday.

Country artist Jeremy McComb will perform on the Chevy stage in the “Bass & BBQ” festival at 2 p.m. Saturday followed by country artist John Wesley Satterfield at 2 p.m. on Sunday.

Also on Saturday and Sunday, 500 free rods and reels will be given away each day to the first 500 children 14 years and under who are accompanied by an adult. The rod and reel giveaways are courtesy of WLTX News 19. One lucky fishing fan will win a Ranger Z521C powered by a 250-horsepower Mercury outboard. The Ranger boat giveaway is courtesy of 97.5 WCOS-FM and is free to enter, but the winner must be present at the conclusion of Sunday’s final weigh-in to win.