Snakes in the Grass in Postspawn 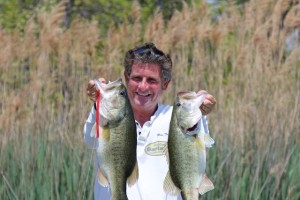 Mike Taylor with a Pair of Snake Bass

Frogs, topwater, Flippin’, crankbaits and jerkbaits. All of those techniques have a time of the year in common – the spawn. Each of those lures can catch bass prior to and immediately after the spawn.

Anglers are always on the lookout for something different; something to give them an edge, and one Oklahoma angler has stumbled onto something that has given him an edge over recent spawn seasons. Mike Taylor is a guide and tournament angler from Okmulgee, Okla., he also owns a vinyl siding and window business called Vinyl Solutions, but his first love is bass fishing.

Taylor has spent several years on the lakes around his home, as well as the Arkansas River mastering how to catch fish on them in order to provide his clients the right results. he developed a pattern for catching bass from the prespawn through postspawn and into the summer he calls Snakes in the Grass.

The approach revolves around an 11″ Gene Larew Salty Snake worm, and he has caught seven bass over 22 inches on it this spring. “It’s something I’ve done that has given me something I know I can catch fish on,” he said. “When I have that kind of confidence in something, it helps my clients as well.” 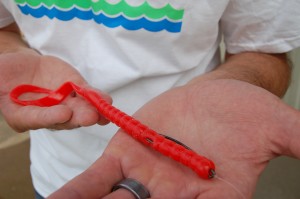 Snake Water
Taylor said that his technique works in many water and sky conditions. He said that he typically sticks to one color, but makes the technique more versatile by switching worm colors with water clarity. “It works in sunny or cloudy skies, clear skies or rain and in dirty or clear water, I just have to adjust the color,” he said. “The one thing that the technique has to have to work is that there has to be shallow aquatic grass for me to work the lure in.”

Snake Gear
Despite the fact that this is a weightless technique, Taylor prefers to use casting gear. He favors a 7′ medium-heavy Team Lew’s rod, a 6.4:1 retrieve speed Lew’s Tournament Pro reel spooled with 15-pound-test Berkley Trilene 100% Fluorocarbon line. He opts for a 4/0 size, medium wire TK110 Eagle Claw TroKar EWG Worm hook to help the lure fall really slowly. His only change is in extremely heavy cover like pads, he opts for braided line and the heavier TroKar YK120 Magworm version.

The reason he rigs it on a light wire hook is simple. “I want this lure to be able to stay up in the water column and come through grass easily,” he said. “I rig it weedless with the lighter wire hook to help it stay up, because I am fishing it in two feet of water or less.”

He favors the Tomato Red colored Salty Snake in all but the clearest water conditions. “I’ve gone through five bags of that worm in one trip,” he said. “I keep more than a hundred in the boat now and a couple other Watermelon colors in case the water around the grass is clearer; but I really love the red one the best. 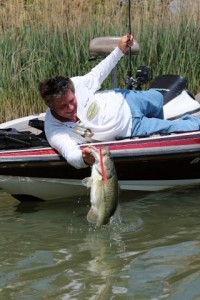 Mike Taylor Reaches for a Bass that ate the Snake

Retrieve
Once he is all set up, Taylor searches shallow grassbeds and makes long pitches or short roll casts to the shallow water inside the grasslines. He allows the worm to slowly sink for a second, then begins by making short twitches of his rod tip once or twice. He then begins to reel the worm through the grass, making the slithery tail swim and snake through the water.

“My trick is to try to cover water as quickly as the bass will allow me to,” he said. “I start at a medium pace and begin speeding up until I stop getting a response from the fish. My theory is that by giving more fish a chance to see the lure, I will increase the amount of chances I have to get a bite.”

In between his four or five turns of the reel handle to make the lure swim, he alternates twitches and pauses with the worm to make it dart and fall. “It darts a little like a soft jerkbait, then kind of shakes and wiggles as it slowly falls,” he said. “The reel trick is to alternate the retrieve, but pay attention so that you notice what is triggering the strikes.”

He said that he keeps his rod tip down so that he is in position to twitch the rod tip and also so that he is in a position to quickly set the hook once a fish bites. “Watch your line, because it will tell you what’s happening,” he said. “A fish will bite and swim off with it. Most of the time, if it is swimming fast it is a male, and if it is slow, it is a female. I’ll get fooled occasionally, but not too often.”

Final Tips
He wanted to reiterate how important it is to not get into the same routine with the worm. “You really need to alternate the cadence on the retrieve,” he said. “We all get guilty of trying the same thing with each technique, and we need to experiment.

“Just go have fun and know that you can really catch a lot of fish with this technique.”