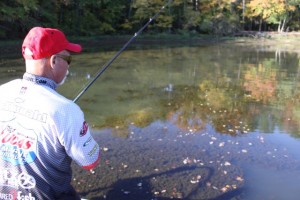 A professional angler knows that one component of their procedures creates more opportunities to catch bass. That would be the need to cover water. The more water an angler can cover efficiently presents the lure to more bass, and by doing that, an angler can greatly increase their chances of getting strikes.

One of the more difficult times to accomplish that is when you are fishing grass. The combination of aggressive bass that require a winding bait, and fields of grass can be a difficult proposition.

Spinnerbaits can work over and around grass, but not through. Lipless crankbaits are known grass producers, but typically in areas with sparse grass patches; the same for vibrating jigs. Swimbaits can be excellent, but there are times that they are just too much for heavily pressured fish. What should an angler turn too?

FLW Tour Pro Billy McDonald has something he has done for many years, and that is to swim a worm. “I’ve found swimming a worm has been an excellent option when I need to cover water,” he said. “It is a perfect complement to swimming a jig or a swimbait; which can get very little response in heavy pressure situations.”

For McDonald, putting a Strike King Rage Tail Cut R worm to use horizontally around grass mats is efficient, and draws big strikes.

Swimmin’ Worm Setup
McDonald said that there are two ways to rig a Swimming Worm for use in and around grass. The first, and most traditional method is a Texas Rig, and the second and perhaps McDonald’s favorite is on a belly weighted swimbait hook.

“I rig the Cut R worm with the tail pointed down and if the grass is really sparse, or I’m using it to swim across the top of grass and drop into holes, I use the Texas Rig with a Tour Grade Tungsten weight,” he said. “But, most of the time I am swimming it through grass beds or over grass that hasn’t yet topped out, I go with a screwlock swimbait hook.” 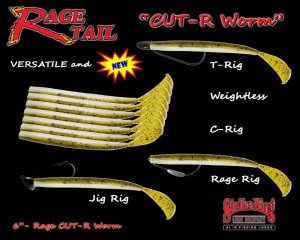 He prefers to rig worm in the belly weighted hook like an Eagle Claw TroKar TK170 because he said it comes through the grass better and adds a little wobbling action to the worm. He prefers to use the 1/8-ounce weight but will go up to 1/4-ounce, choosing a 3/0 to 5/0 hook. He will use the same weight conventions in the Tour Grade Tungsten, but pegs the weight with a 4/0 to 5/0 TroKar TK120 Magworm hook with this setup.

He like a rod that has a soft tip for making precise cast, but has a lot of backbone for getting fish out of the cover. His choice for the presentation is a Dobyns DX795 Flip, which he matches with a 6.4:1 Lew’s Tournament Pro reel filled with 30 to 40 pound-test Seaguar Kanzen braided line, depending on the density of the cover. If the grass is sparse, or the water is particularly clear, then he will select 15 to 20-pound-test Seaguar Invizx Fluorocarbon line.

He finds that it is especially good in clear to stained water, and he makes his color selections based on the water clarity. Colors like watermelon, and green pumpkin are used in clear water. Then he turns to Black Blue Flake and Junebug if the water is more stained.

Retrieves and When
McDonald said that it is critical to make contact with the grass hen retrieving this setup. However, he said to try to keep from completely burying it up in the grass. “You really want to tick the grass in most instances,” he said. “Unless the fish are really aggressive and a buzzing retrieve is the ticket, I try to tick the grass.”

To begin, he positions his rod at a 10 o’clock position and reels the bait at a medium slow retrieve, then speeds it up until he finds the cadence that bass stop responding. “I typically start on the slower end and work my way up because I think I find the pace faster than trying to reverse it,” he said. “It’s just what has worked for me over the years.” 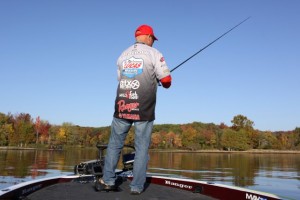 He does like to swim it atop matted grass until he gets to holes in the grass as well. When he does that, he drops his rod tip slightly to let it fall on slack line, then picks it up to feel for a fish after it has stopped sinking.

One of his favorite times to use the lure is in the postspawn period. “I look for areas that should be holding those little clouds of fry around grass clumps,” he said. “When I get that fry to scatter, those fry guarding males will really get aggressive and smash the worm.”

Final Tips
McDonald urged anglers not to get in a hurry when reacting to a strike on this presentation. He said to let the fish do most of the work. “You will most likely see the strike or just feel a small tick,” he said. “When that happens, keep reeling until the rod loads up and just bow up on it.

“The gear we’re using really promotes great hook penetration, and if you react to quickly, then you will pull it away from them,” he said. “Let them load the rod first, then you know you’ve got them.”