Talking to Gerald Swindle before day one of the SiteOne Bassmaster Elite on the Harris Chain of Lakes, it was plain to see “the G-Man” wasn’t stressing out about his first day of competition on the massive fishery that 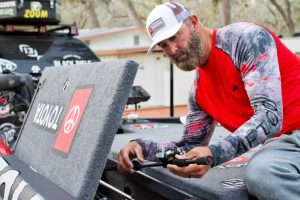 makes up the Harris Chain. Swindle seemed locked in, at peace with the task at hand.

The Team Toyota pro admitted he didn’t have a bad practice, but he certainly didn’t find piles of giant bass he suspects it will take to win this week. Instead, Swindle attributed his demeanor to the fact he and his wife LeAnn have spent the past six weeks in the state of Florida… “spring training” as he called it.

Usually both Swindle’s are so busy with boat shows, speaking appearances, designing jerseys, truck and boat graphics packages, or rigging equipment that they arrive to the first tournament on the schedule rushed and somewhat frazzled. So, for the first time in over fifteen years, they planned to point their Tundra and 5th wheel south several weeks before the first Bassmaster Open and even further ahead of the first two Elite Series events of 2022.

“This has been one of the best decisions I’ve made in years,” Swindle smiled. “We’ve done a lot of fishing, rode bikes almost every day, ate really well, enjoyed each other’s company, and simply slowed life down a bit. It’s also given me time to work on my soon-to-be-released signature series of rods and reels from 13 Fishing. I’ve been able to pour my soul into it the past few weeks and I am really excited to get this in the hands of fishermen.”

In the life of a pro angler, January and February are among the busiest and most stressful months of their year. Even more so for this 2022 season, as the fishing industry has been affected by equipment delays and supply chain issues like the rest of the world.

Swindle said this ‘spring training’ is just what the doctor ordered to get both his body and specifically his mind ready for three straight weeks of tournaments.

“Our electronics keep getting better at clearly showing us what’s underwater, but real clarity doesn’t come from a depth finder,” Swindle offered. “It doesn’t matter what my electronics show me, if my mind isn’t clear then I ain’t going to read it right. Especially not at this level.”

After a strong finish in the Bassmaster Open on the Kissimmee Chain Swindle narrowly missed the cut at the St Johns River, but says he lost some key fish and had every opportunity to have another high finish. Missteps with his mechanics, not decision-making issues.

As he readied himself for his third straight week of tournament fishing with a clear mind and calm conscious, I’d say Swindle’s logic has been proven correct.

Swindle’s ‘spring training’ concludes this weekend after he attends to the business at hand on the Harris Chain. From here he’ll drive to Alabama to pick up an all-new 2022 Toyota Tundra, put the final touches on his new ride, and then head to South Carolina for his 19th Bassmaster Classic appearance.

Fishing season certainly doesn’t slow down for pro anglers this time of year, but Swindle’s PMA is right where it needs to be.