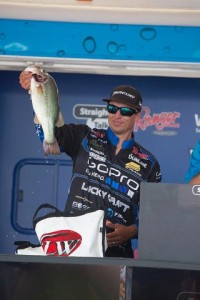 At this time, in most areas of the country, cold water is the rule. In these kinds of conditions, with cold water and gloomy skies, bass tend to suspend and that can make them tough to catch. There are a few ways to catch bass in these conditions, but if the goal is to be able to move and cover water, then there is only on lure that will work; a jerkbait.

Brent Ehrler, Major League Fishing standout, and 2015 Elite Series rookie is one of those anglers who has come to rely on the fish drawing power of jerkbaits. “There’s no better traditional lure for being able to pull fish to itself in my opinion,” said Ehrler. “A jerkbait can be a lure that makes them show where they are holding, and when it’s at its best, it really is a great way to put a lot of fish in the boat.”

In any season, the conditions are critical for this category of lure, and Ehrler knows when to apply it for it best result. In the winter months, Ehrler has a specific game plan for throwing them, and he has a pair of lure categories that he chooses, depending on where bass are located, and the water color.

Where to Jerk in Winter

Ehrler believes that the majority of bass in the wintertime will be located near deeper water on the main lake. Whether he is fishing at home in the West, or most other areas of the country, he always starts his search for bass on the main lake. “I look for main lake points that are near where deep water access is,” he said. “It can be where the main river channel is, a creek channel, or where they intersect; but, the best areas usually have deep water access.” 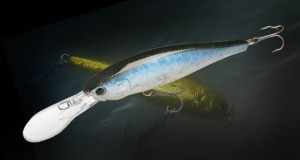 He tends to favor those kinds of spots when they have a little additional cover or additional structure associated with them. “If I can find some grass, some brush or even a big rock or standing timber there, then there is strong holding power there.” In these instances, he said that the bass will tend to be suspended in the upper portion of the cover, and that helps him present his lure.

He lets the depth of the water dictate which one he chooses. 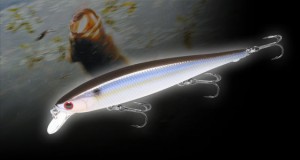 If bass are in deeper water, he likes to choose a bait that will run deeper, but still proved a strong profile in the water. His choice is a Lucky Craft Pointer 68DD or 100DD. “This is a bait I choose when bass are suspended as deep as 20 feet over cover,” he said. “In relatively clear water, I’ve seen bass come as much as 10 feet to strike a lure, and even further in clear water. But, in cold water, there are times they don’t want to commit, and this lure gets a little closer to them so they don’t have to go as far to get it.”

The 68DD will hit eight feet on light line, and the 100DD will run as deep as 10 feet. “I really feel like the fish in that depth range aren’t getting bombarded by jerkbaits,” he said. “That gives me an advantage, because they are not seeing that action that close to where they are living.”

His choice for when the bass are shallower is a Flash Pointer 100SP. This stick shaped minnow will hit five to six feet on light line, and has a very erratic action that draws the attention of bass. “The 100 has a lot of action and really does get a lot of attention,” he said. “It has a weight transfer system, so it has side to side movement, and when the ball moves around, a little up and down movement as well. It has a lot of unpredictable motion, and that helps to draw strikes.”

His only variance from these lures is if he is on a lake that is known for larger bass. At that point, he selects the Flash Pointer 130SP because it has a larger profile that appeals to large bass more readily. 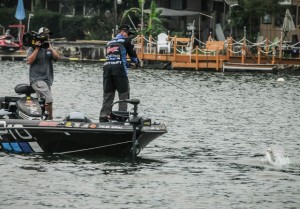 Ehrler’s Jerkbait Gear
The Redlands, Calif. pro likes to make sure he uses a rod that gives him plenty of snap with which to make the lure dance in the water. As such, he chooses to use a 7′ medium action Daiwa Tatula rod that he matches with a Daiwa Tatula Type R reel with a 6.3:1 retrieve speed. “I don’t want to make the lure move through the water too fast, so I keep the reel speed down,” he said. “I want a lot of side to side action without making the lure move forward too fast, and the 6.3:1 speed is perfect for not overpowering the lure.”

He selects his line so that it has the best combination of strength and diameter. His selection always comes down to Sunline FC Sniper Fluorocarbon, and he’ll use 8-pound-test in clear water where he needs a little extra depth, or 10-pound-test the rest of the time. “I just know exactly how this line acts, and it is the perfect line for me when I throw jerkbaits,” he said. “It is the ultimate combination of strength, stretch and diameter to really work a jerkbait and get the optimal depth out of it.” 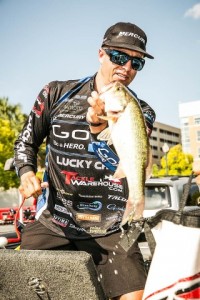 Retrieves
Ehrler knows that his best results have always come from having an erratic, varied retrieve. “I try not to get uniform in the jerks and pauses,” he said. “I try to alternate the movements lot and not let the lure get into too much of a rhythm.”

He said he uses short snaps with brief pauses in between most of the time, but alternates the amount of times he snaps the lure consecutively, and varies the length of the pauses. “I know there are areas of the country – such as the Ozarks – that long pauses of 30 to 60 seconds are common,” he said. “I don’t have the patience for that, so my longest pauses anywhere will be 10 to 15 seconds; I seem to get my best results by being erratic and making the fish react.

Final Tip
Ehrler said that he increases his hook to land ratio by changing his hooks to Gamakatsu round bend treble hooks.  He said that he knows they are a thin diameter wire hook, but that is actually a feature that helps land more fish. “Those sticky sharp hooks grab anything that get close to them,” he said. “So, they help me land more fish that slap at the bait, and you’re not going to be pulling very hard on the fish once they are hooked, so it really benefits you to have a hook that will penetrate easily.”