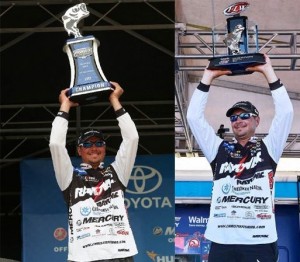 Much has been made of the competition between the Bassmaster Elite Series and FLW Tours lately.  Between schedule making decisions and the time frame of the schedules, the two tours are frequently discussed and compared.

This year it has become an even more vibrant discussion with the tour schedules lining up in such a way that qualified anglers could fish both tours.  But even still, the ability to fish both tours has done little to quell the comparisons of the tours themselves or the discussions of “who has the best anglers?”

There have been defections of anglers from both tours to the other.  Aside from when the Elite Series was first announced in 2005, there have been a few anglers make the switch from B.A.S.S. to FLW.  Some of those have been Glenn DeLong, Dave Wolak and Peter Thliveros.  B.A.S.S. has received their fair share of transplants as well, Bobby Lane, Andy Montgomery, David Walker, Matt Herren, Ott Defoe and a couple more in 2013.

In the effort of not broadening our analysis, we are going to stick to comparing those who are fishing both tours this year, and those who defected from one tour to the other.

Our goal is not to identify which tour is better.  The Elite Series and FLW Tour are the best our sport has to offer for those anglers willing to put up the money and invest the time into making their living as a professional angler.

So, our comparison will include those anglers who are fishing both tours.  But, because there are only two FLW based anglers 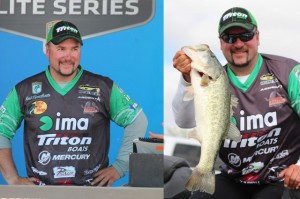 competing on both, we will include two anglers on the FLW side of the ledger that migrated tours this year to B.A.S.S. to try and better balance the sampling.  Those anglers are Clifford Pirch and Kevin Hawk, and we will use them on the FLW side because that is where they initially established their professional resume.

In other words, for sake of this comparison, we will place the angler on the ledger of the tour that they competed on last year, for the sake of comparison.  In order to try and keep it uniform, we will base our factoring on a percentage of field basis.  Using the placed finished to identify what percentile the angler finished in the perspective field.  The reason?  The Elite Series field has 100 anglers, while the FLW Tour has had a maximum of 175, so we will use percentages to place them for comparison purposes.

Ultimately, we will see which group of anglers has performed at a higher level against the field of anglers from their second tour.  Our field consists of the FLW based team of Jason Christie, Pirch, Hawk and Kelley Jaye.  Our Elite Series based team consists of Ish Monroe, Zell Rowland, Fred Roumbanis, Tommy Biffle and Steve Kennedy.

The Totals
When we put the numbers together (see spreadsheet below) It shows that one team has been the most consistent in their placement throughout the season thus far.  The average finish of the Elite Series pros in FLW Tour competition has been in the 41.36 percentile.  Meanwhile, the FLW pros average group finish has been in the 59.2 percentile for all five of their events on the Elite Series.

Without a doubt, the most impressive season as a whole would have to go to Christie.  His three tour wins is an incredibly impressive feat.  However, the angler with the most statistically impressive set of finishes is Monroe.  While he has not yet earned a victory this season, he has averaged finishing in the 29th percentile in FLW Tour events, let alone the fact that he currently ranks fourth in the Toyota Bassmaster Angler of the Year Points Standings.

So, when we can statistically compare the crossovers in the two tours for the first time in many years, the group that has had the highest average finish in the other tour’s events has been the Elite Series pros – thus far.

Ish Monroe is Building the Best Statistical Season of all of the Two Tour pros – photos courtesy FLW Outdoors and B.A.S.S.

The Brass Tacks
The bottom line is to get a true picture of the quality of their seasons, we must compare them head to head, but we just don’t have the time to do that right now.   There are anglers who look like they will qualify for the championships in both tours.

First, Christie is already qualified for the 2014 Bassmaster Classic by virtue of his win at Bull Shoals, and with a sixth place position in the FLW Tour points with only one event to go, he is a shoe in to qualify for the Forrest Wood Cup.

Monroe also looks like he is in position to be a qualifier of both championships. With his fourth in the Elite Series standings, and 24th in FLW Tour standings, he has a good chance to do so as well.

Roumbanis has a real shot at it as well.  With three Elite Series events remaining, he currently sits in 42nd place in the Elite Series points, and with one event left on the FLW Tour side, he ranks 45th.  There are currently five angler already qualified for the Forest Wood Cup on the Red River that rank above him in the points.  If he can climb five positions in the final event of the season, he will qualify for the FLW Tour Championship, and then focus on the Classic next.

Single Championship Potential
Rowland currently sits inside the Forrest Wood Cup qualifying bubble in 34th place.  With a steady showing at the final even of the season in Tennessee, Rowland can qualify.  However, his 83rd place position in the Elite Series points will most likely leave him out of the 2014 Bassmaster Classic.

Pirch has a strong chance to make the 2014 Bassmaster Classic on his own right, as he is currently positioned in 47th place; with three solid events, he could move up into qualifying position. Biffle is another that has a solid chance to make the Classic in 2014.  He currently sits in 52nd place, and has a track record of finishing strong.

It has certainly been an interesting year, and it’s not over yet.