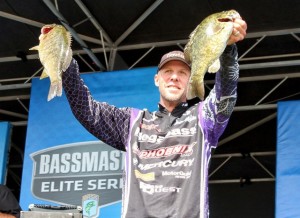 Guntersville, Ala – Aaron Martens is widely known as an extraordinary deep water angler which is largely due to his use of electronics. Martens will be using Lowrance electronics for the 2014 season.

Martens appreciates the technological advances Lowrance has made. Martens stated, “Since my early days of fishing, I have relied heavily on my sonar to help me find and catch fish. The advances Lowrance has made over the past decade have literally changed fishing. Lowrance has made deep water fishing, and finding fish at any depth much easier. It’s gotten to the point where I spend days on the water without making a single cast, I’ll just use my electronics to see what’s below and to the sides of the boat. It’s really incredible what the new Lowrance units can do and I can’t wait to put them to good use next week at the Bassmaster Classic. “

Lowrance makes a large variety of electronics for use by fisherman including those fishing for bass. In 2008, Lowrance launched the first high definition multifunctional display unit that redefined marine electronics.  Today they offer units with SideScan®, Down Scan Imaging ™, Broadband sonar, Trackback, Broadband Radar, and a host of other technological advantages for anglers.

Martens kicks off his 2014 season at the Bassmaster Classic next week at Lake Gunersville. The Classic Appearance will be Martens’ 15th appearance in the championship. In his three previous Alabama based Classics, Martens has finished in 2nd, 9th and 25th, all of which were on Lay Lake.