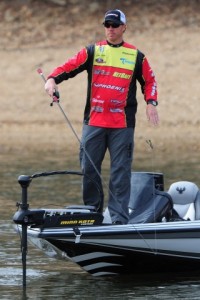 “When I decided to change boats it was with the idea that I would fish out of the best,” says Vinson. “As a professional angler you hear a lot from other anglers and from your fans
about the quality of certain products.

“One of the biggest reasons I contacted Phoenix was because all I ever heard about their boats was positive, on and off the record. And I can tell you that after running one on Toho
during the first Southern Open about a week ago I’m confident that I made the right decision. My boat was fast and it handled the rough water without a hitch, and it was
designed and built by fishermen so everything is well built and is in the right place.”

Vinson lives with his wife, Stephanie, and their son, Gaige, in Wetumpka, Alabama. He has fished the Bassmaster Elite Series since 2009 and has earned more than $400,000 in the
ensuing five years. He’s fished two Bassmaster Classics. His record in those two events includes a second place finish in 2012 on the Red River. He’ll fish his third Bassmaster Classic from a Phoenix in about a week on Lake Guntersville.

Phoenix Boats President, Gary Clouse, expressed the sentiment that Vinson’s decision is a win-win situation for everyone involved. “We’re pleased to have an angler with Greg’s work ethic, morals and professional skills in one of our boats. We build first-class boats and we’re proud when first-class anglers fish out of them. We consider it a privilege to have Greg onboard.”