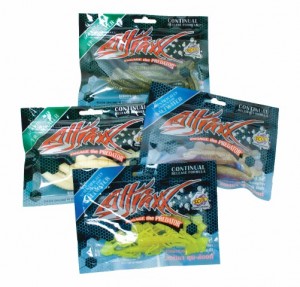 DENVER, Colo. – The most powerful fish attractant in the world just became even more deadly. JOBU Outdoors, makers of ATTRAXX™ fishing lures with scientifically engineered and patented SCI-X™ feeding stimulants, revamped the old formula and products and put them in new packaging. JOBU Outdoors will unveil these new products as an exhibitor during the 2013 ICAST Show, slated for July 10-12 in Las Vegas, NV. “We’re excited to attend ICAST for the first time as an exhibitor,” explained Doug Long, JOBU owner and Principal. “We look forward to meeting new people and making new friends in the industry. We re-evaluated the already outstanding older recipe for the SCI-X attractant with Dr. John Caprio and added some new and improved formulas for both marine and freshwater applications. We also tested the potency of the new formulas to see how many parts per million they were exuding in the water with great results.” Dr. John Caprio, a world-renowned fish neurobiologist and Louisiana State University professor, developed SCI-X natural chemical compounds that engages the predatory instinct of fish to feed. Caprio spent most of his life studying how fish react to certain stimuli and developed a formula that includes several natural chemicals that fish expect to detect when looking for and tasting food.

When an ATTRAXX with Sci-X soft bait hits the water, it immediately begins releasing massive amounts of these natural stimulants and continues to release the most powerful feeding stimulant ever introduced to the world of fishing. As a result, it kicks in a fish’s natural predatory instinct to attack the lure reflexively. In addition, fish often hold onto the bait longer because it tastes like natural prey. After developing the new and improved formulas and putting them into new baits, Long joined ATTRAXX pro staffer Shawn Vallandingham, a professional redfish angler from Leesburg, Ga., in the Louisiana marshes to test these creations on redfish. They experimented with new shrimp and menhaden (pogie) formulas with incredible success. “We put good numbers of fish in the boat with the new baits,” Long recalled. “We could see the redfish and they went nuts for the bait. When we’d cast an ATTRAXX bait toward a redfish, it would turn and immediately go right for the bait. We get e-mails daily from people who fish with our baits telling us about all the fish they catch. Unlike some lures, which must be kept moist, reusable ATTRAXX baits do not wilt or dry up and they don’t need to be retreated when left exposed to the elements, a major benefit over other such lures.”

JOBU bought ATTRAXX in 2012 and now makes 15 freshwater and 6 saltwater lure models, each infused with the powerful SCI-X feeding stimulants for all types of fishing applications. Anglers and journalists attending the 2013 ICAST Show can stop by Booth 527 to see the complete line of ATTRAXX products.

Anglers may also see the complete line of potent ATTRAXX products or order products on line with the new shopping cart at attraxxbaits.com. For more information, call 303-918-4727 or visit the ATTRAXX Baits w/Sci-X page on Facebook.