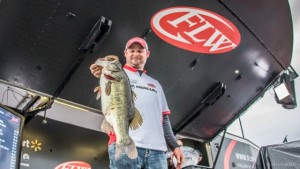 CLEWISTON, Fla. (Feb. 6, 2016) – Anchored by an 8-pound, 10-ounce kicker, pro Bradley Hallman of Norman, Oklahoma, brought four bass to the scale Saturday totaling 14 pounds, 3 ounces to extend his lead to more than 13½ pounds heading in to the final day of competition at the Walmart FLW Tour at Lake Okeechobee presented by Ranger Boats.  Hallman’s four-day total of 64 pounds, 10 ounces make him the No. 1 seed on championship Sunday as the field is now cut to 10 in the four-day competition that features 169 of the top bass-fishing anglers in the world competing for a top cash award of up to $125,000.

In second place is Alex Davis of Albertville, Alabama, who weighed in five bass totaling 9-2 Saturday for a three-day cumulative weight of 15 bass worth 51-1. Clewiston local Brandon McMillan brought a five-bass limit to the scale weighing 12 pounds, 2 ounces for a three-day total of 44-3 to remain in sixth place.

“I had a really tough day today,” said Hallman, a former Bassmaster Elite Series angler who is fishing his first tournament on the Walmart FLW Tour. “It started off with the giant, and when I caught that I was thinking ‘This just might be the week for me.’ But then they just quit biting. I fished clean, I didn’t lose any fish. It just didn’t happen for me today.”

Despite being the only pro to not catch a limit, Hallman’s four bass weighing 14-3 was still the third-largest stringer weighed on Saturday. He thought the water temperature was the main factor in his day three struggles.

“The water temperature dropped 2½ degrees overnight,” Hallman said. “That’s not a real big drop, but here in south Florida that is a big deal to these fish. They wouldn’t fire today.”

When asked if he was comfortable with his 13½-pound advantage heading into the final day, Hallman was confident but remained realistic.

“It’s fishing, and a lot can happen on that final day,” he said. “I’ve seen guys with 20-pound leads struggle and get beat. I’m just going to go out there tomorrow and fish like I have been all week. I’m going to flip reeds all day and when the clock says it’s time to come in, I’ll know that I will have left it all out on the water.”

The top 10 pros advancing to the final day of competition on Lake Okeechobee are:

Overall there were 99 bass weighing 207 pounds, 5 ounces caught by pros Saturday. Nineteen of the final 20 pros weighed in five-bass limits.

Tim Cales of Sandstone, West Virginia, won the co-angler division and $20,000 Friday with a two-day total of 10 bass weighing 30 pounds, 11 ounces, followed by Gary Haraguchi of Redding, California, who finished in second place with 10 bass weighing 27 pounds, 5 ounces worth $7,500.

Anglers will take off from the Clewiston Boat Basin located at 709 Hoover Dike Road, in Clewiston at 7:30 a.m. Sunday, the final day of competition. Sunday’s final weigh-in will be held at Walmart, located at 1005 W. Sugarland Highway, in Clewiston beginning at 4 p.m.

Fans will be treated to the FLW Expo on Sunday from noon to 4 p.m. at Walmart prior to the final weigh-ins. The Expo includes a 100-yard Lew’s Casting Lane, the opportunity to interact with professional anglers, enjoy interactive games, activities and giveaways provided by FLW sponsors, and learn more about the sport of fishing and other outdoor activities. All activities are free and open to the public.