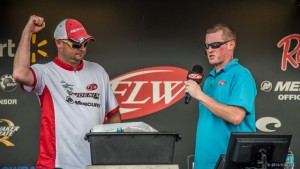 CLEWISTON, Fla. (Feb. 4, 2016) – Oklahoma pro Bradley Hallman, brought a five-bass limit to the scale weighing 25 pounds even Thursday to grab the early lead after day one of the Walmart FLW Tour at Lake Okeechobee presented by Ranger Boats. Right behind him in second place is renowned Okeechobee angler Brandon McMillan of Clewiston, who weighed in five bass totaling 22-8. Hallman now brings a 2½-pound lead into day two of the four-day tournament that features 169 of the top bass-fishing anglers in the world competing for a top cash award of up to $125,000.

“It is very enjoyable to lead the first day, but it is Okeechobee,” said Hallman, who is fishing in the first Walmart FLW Tour event of his career after a stellar 2015 season in the semi-pro Costa FLW Series. “How many times have we seen guys come down here and catch them and lead one day, then come back with four pounds the next day. I had a great day today and I’m happy to be in the position that I’m in.”

Hallman said that he fished mainly in one key area on the south end of the lake, but was covering a lot of water and had his trolling motor on high for most of the day.

“I caught 20 to 25 fish today, but not all of them were big,” Hallman said. “I’m flipping and throwing a winding bait, and I’m catching fish on both.”

The Norman, Oklahoma native said that he had very little experience on Okeechobee, having fished just one FLW Series tournament on the lake more than eight years ago. In preparation for this tournament, Hallman said that he studied old episodes of the “FLW” television show to help find the big fish.

“I spent a lot of time watching videos and old TV shows and year after year after year I was seeing the big fish coming out of the same vegetation. So, I looked for that and what I’m fishing looks like the same stuff.”

With local meteorologists predicting a cold front and a strong north wind tomorrow, most anglers expect day two to fish drastically different than the first which saw sunny 80-degree temperatures and a slight breeze from the south.

“Tomorrow will be survival day,” said Hallman. “I don’t have the experience on this lake, so I don’t know what areas are going to be protected from the wind and what’s not. I’m going to go check the area that I fished today in the morning and if it doesn’t look good I’ll get back in the canal and head to the north end.”

The top 10 pros after day one on Lake Okeechobee are:

Tommy Dickerson of Orange, Texas, earned the Big Bass Award on the pro side Thursday, weighing a 7-pound, 2-ounce largemouth to win the $500 prize.

The top 10 co-anglers after day one on Lake Okeechobee are:

Surman earned the Bridgford Big Bass Award on the co-angler side Thursday with a largemouth totaling 7 pounds, 15 ounces to win the $250 prize.

Also for youth, the FLW Foundation’s Unified Fishing Derby will be held at Roland & Mary Ann Martin’s Marina on Saturday, Feb. 6 from 9:30 – 11:30 a.m. The event is hosted by FLW Foundation pro Cody Kelley along with other FLW Tour anglers, and is free and open to area youth 15 years of age and younger and Special Olympics athletes. Rods and reels are available for use, but youth are encouraged to bring their own if they own one. All bait is provided by the DMF Bait Company.