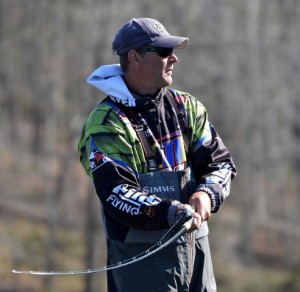 ROGERS, Ark. (April 12, 2013) – Pro Brandon Coulter of Knoxville, Tenn., caught a five-bass limit weighing 14 pounds, 12 ounces Friday to grab the lead on day two of the Walmart FLW Tour at Beaver Lake presented by Kellogg’s. Coulter now has a two-day catch of 10 bass weighing 31-15 and holds a 1-pound, 12-ounce lead over Austin Terry of San Angelo, Texas, in a tournament featuring the world’s best bass-fishing pros competing for a top cash award of up to $125,000.

“Yesterday I caught my limit in 15 minutes,” said Coulter, who has more than $240,000 in career earnings with FLW. “Today I went back to the same area thinking I would catch a limit of spotted bass for 7 or 8 pounds and just get myself going. There was nothing there. I didn’t catch a fish.

“I moved to some areas where I thought the largemouth might be pulling up and I was a little more fortunate,” Coulter continued. “I’m fishing transition areas where the bass are starting to stage about 5 or 6 miles up the lake.”

Coulter weighed in four largemouth and one spotted bass in his five-bass limit, and estimated that he caught around a dozen keepers throughout the day. All of his fish that he caught came on an umbrella rig.

“I haven’t made a cast with anything other than an umbrella rig the past two days,” Coulter said. “When you can get a 5- or 6-pound bite on this lake, why would you throw anything else?”

When asked if he was confident that his pattern would hold up for Saturday, Coulter was hesitant to give any predictions.

“It’s Beaver Lake – you can’t be confident,” he said. “I have no preconceived notion on what is going to happen out here day to day. I don’t really feel any pressure because I know that it’s just as likely for me to zero as it is for me to weigh 17 pounds. I’m just going to go out and work as hard as I can and we’ll see what happens.”

The top 20 pros that will fish Saturday on Beaver Lake are:

Christie won Friday’s 3M ScotchBlue Big Bass Award on the pro side with a fish weighing 6 pounds, 8 ounces to win the $500 prize.

Fans will be treated to the FLW Outdoors Expo at the John Q. Hammons Center on Saturday and Sunday from noon to 4 p.m. prior to the final weigh-ins. The Expo includes Ranger boat simulators, the opportunity to interact with professional anglers, enjoy interactive games, activities and giveaways provided by sponsors, and fans can learn more about the sport of fishing and other outdoor activities. All activities are free and open to the public. On Sunday the first 300 children 14 and under who are accompanied by an adult will receive a voucher to redeem for a free rod and reel combo courtesy of KMCK Power 105.7 FM after Sunday’s final weigh-in. Also on Sunday one lucky fishing fan will win a Can-Am ATV courtesy of KNWA. The ATV giveaway is free to enter but the winner must be present at the conclusion of Sunday’s final weigh-in to win