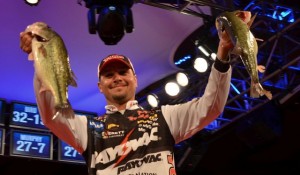 ROGERS, Ark. (April 13, 2013) – Rayovac pro Jason Christie of Park Hill, Okla., caught a five-bass limit weighing 20 pounds, 4 ounces Saturday to take the lead on day three of the Walmart FLW Tour at Beaver Lake presented by Kellogg’s. Christie now has a three-day catch of 15 bass weighing 47-7 and holds a 2-pound, 8-ounce lead over Keystone Light pro Brandon Coulter of Knoxville, Tenn., heading into the final day of competition in a tournament featuring the world’s best bass-fishing pros competing for a top cash award of up to $125,000.

“I’m just covering a lot of water and just fishing what is in front of me,” said Christie, who finished in fourth place at the FLW Tour event last month at Lewis Smith Lake. “The good thing is that I found my fish during the tournament, and not during practice. I’m hoping that new ones are coming there every day.”

Christie said that he left his main area early and caught fish steadily throughout the day. He said he caught around a dozen keepers and culled twice from his original limit. He said that not all of the fish that he caught came on an umbrella rig.

“The majority of my fish came on a Yum Yumbrella Flash Mob Jr.,” Christie continued. “That bait just lets me cover water. But when I come across some structure – a dock or a log – I’ll pull in and flip. I caught a few throwing a Bomber 6A crankbait and flipping a Booyah jig.

“It’s really all about getting the big bites here,” the Rayovac pro went on to say. “You can have it figured out and still only catch nine pounds. You really don’t know when those big ones are going to bite. My chances of catching 20 pounds again tomorrow are slim. But, I don’t think it’ll take 20 to win. I’m just going to go fishing.”

“It doesn’t get any better than this,” said Meador, who finished in fifth place in the co-angler division when FLW last visited Beaver Lake in 2012. “I’ve been close several times, and to finally get the win in front of my home crowd and my family on my home lake… it’s great.”

Meador said that he caught all of his fish Saturday on a Bass X jig, but varied his techniques throughout the week.

“I changed up every day,” he said. “I had been catching them on a Carolina rig. I caught some on a swimbait. Today, I put a jig in my hand. It was just a little bit of everything.”

In addition to the top award of $25,000, co-anglers were also fishing this week for valuable points that could help them qualify for the 2013 Forrest Wood Cup presented by Walmart. The top 35 co-anglers in the point standings from the six events on the 2013 Walmart FLW Tour will qualify.

The top 10 pros will take off from Prairie Creek Park located at 9300 N. Park Road in Rogers at 7 a.m. on Sunday. Sunday’s final weigh-ins will be held at the John Q. Hammons Center located at 3303 Pinnacle Hills Parkway in Rogers beginning at 4 p.m.

Fans will be treated to the FLW Outdoors Expo at the John Q. Hammons Center on Sunday from noon to 4 p.m. prior to the final weigh-in. The Expo includes Ranger boat simulators, the opportunity to interact with professional anglers, enjoy interactive games, activities and giveaways provided by sponsors, and fans can learn more about the sport of fishing and other outdoor activities. All activities are free and open to the public. The first 300 children 14 and under who are accompanied by an adult will receive a voucher to redeem for a free rod and reel combo courtesy of KMCK Power 105.7 FM after Sunday’s final weigh-in. One lucky fishing fan will also win a Can-Am ATV courtesy of KNWA. The ATV giveaway is free to enter but the winner must be present at the conclusion of Sunday’s final weigh-in to win

For complete details and updated information visit FLWOutdoors.com. For regular updates, photos, tournament news and more, follow us on Facebook at Facebook.com/FLWFishing and on Twitter at Twitter.com/FLWFishing