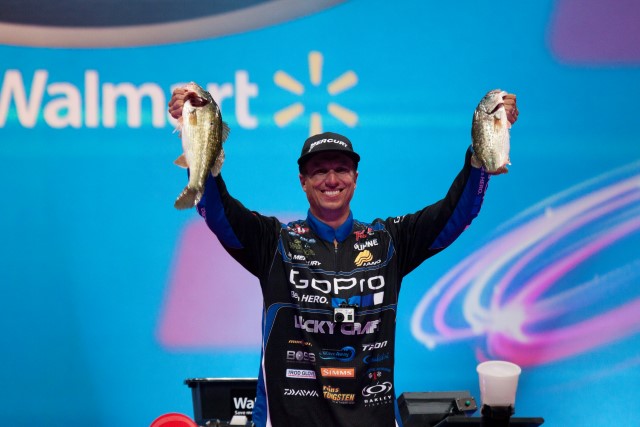 COLUMBIA, S.C. (Aug. 16, 2014) – Pro angler Brent Ehrler of Redlands, Calif., brought a five-bass limit to the scale Saturday weighing 13 pounds, 5 ounces to take the lead after day three of the Forrest Wood Cup at Lake Murray presented by Walmart. Ehrler, with a three-day total of 15 bass for 39-1, holds a 3-ounce lead over Chevy pro Bryan Thrift of Shelby, N.C., who has a three-day total of 15 bass for 38-14 in professional bass fishing’s world championship that features 45 of the best professional anglers from across the country casting for the sport’s top cash award of $500,000.

“I’m catching fish doing a number of different things,” said Ehrler, who is poised to become the first ever two-time Forrest Wood Cup champion after winning the event in 2006. “I’m catching some moving fast and covering the bank; I’m catching some schooling fish and I’m catching some fish deeper with bottom baits. The bite seemed to be a little bit better today. I think the clouds this morning definitely helped.”

Ehrler said that it took him until 1 p.m. to catch his limit during the first two days of competition, but he had his limit today by 8:30 a.m. He said that he caught his fish that he weighed in on three or four different baits and thinks that he has saved a few of his areas for the final day.

“Today was strange because I ran some areas where I didn’t catch them in practice and I was able to catch a few,” Ehrler said. “I did lay off some areas where I think I can catch them tomorrow. I’m not sure how many fish are there, but I’m going to run the areas that I really believe are holding fish and hopefully there will be a good enough stringer there to finish things off.

“I’ll definitely have some butterflies in the morning,” Ehrler continued. “When I won back in 2006, it wasn’t even a goal of mine to win the tournament. It was my first Forrest Wood Cup appearance and I was just happy to be there. Now that I’ve done it I feel like I can actually win, so that will definitely add to the stress a little bit more because I feel like I have a great opportunity.”

The 2014 Forrest Wood Cup at Lake Murray presented by Walmart is being hosted by Capital City/Lake Murray Country Regional Tourism.

The final 10 anglers will take off from Dreher Island State Park located at 3677 State Park Road in Prosperity, S.C., at 7 a.m. Sunday. Weigh-in will be held at the Colonial Life Arena located at 801 Lincoln St. in Columbia, S.C., beginning at 5 p.m. Sunday.

Fans will be treated to the FLW Expo at the Columbia Metropolitan Convention Center located at 1101 Lincoln St. in Columbia, S.C., on Sunday from 10 a.m. to 4:30 p.m. prior to the weigh-ins. The Expo includes Ranger boat simulators, the Chevy Truck Tour, the opportunity to interact with professional anglers, enjoy games, activities and giveaways provided by more than 40 sponsors, shop the latest tackle and outdoor gear, and learn more about the sport from more than 100 exhibitors. All activities are free and open to the public.

FLW has teamed up with the South Carolina Barbeque Association to feature the “Bass & BBQ” festival presented by The State. Fans will be able to visit their favorite pit masters and enjoy some delicious award-winning BBQ on Sunday during the FLW Expo. Country music artist John Wesley Satterfield will perform on the outdoor stage in the “Bass & BBQ” festival at 2 p.m.

Also on Sunday, 500 free rods and reels will be given away to the first 500 children 14 years and under who are accompanied by an adult. The rod and reel giveaways are courtesy of WLTX News 19. One lucky fishing fan will win a Ranger Z521C powered by a 250-horsepower Mercury outboard. The Ranger boat giveaway is courtesy of 97.5 WCOS-FM and is free to enter, but the winner must be present at the conclusion of Sunday’s final weigh-in to win.