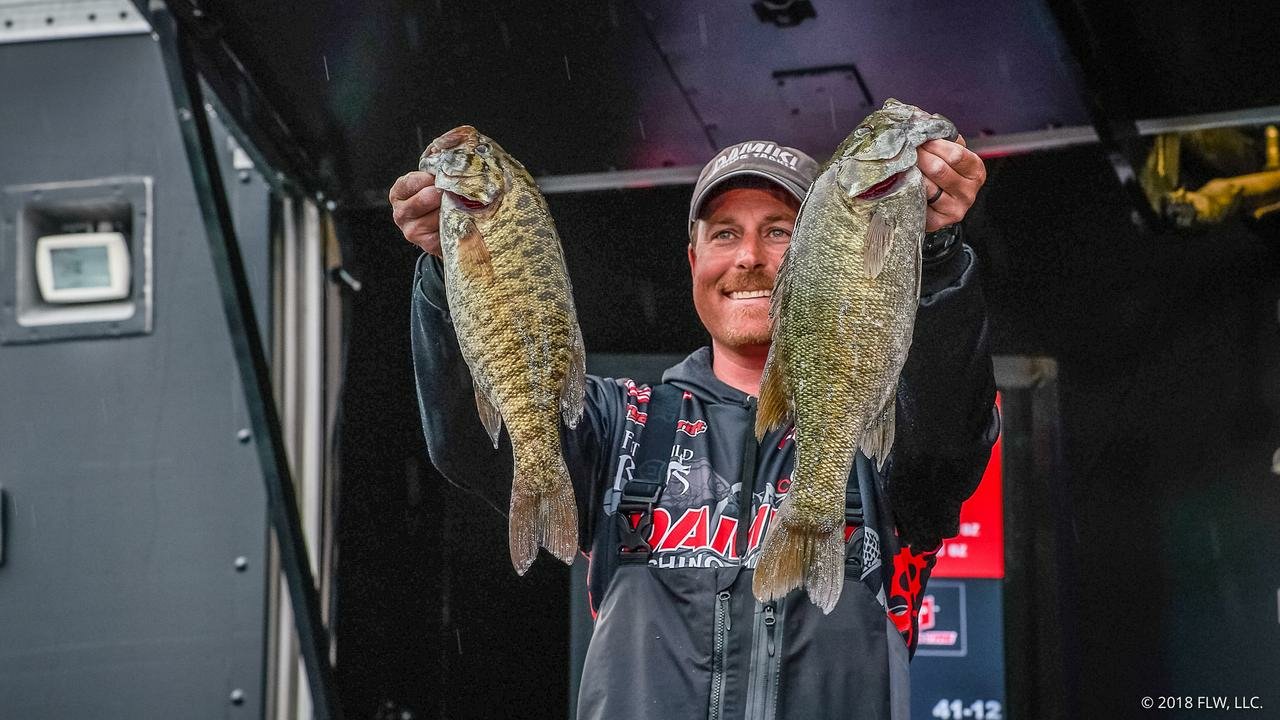 SOMERSET, Ky. (April 14, 2018) – Reigning Pennzoil Marine Angler of the Year (AOY) Bryan Thrift of Shelby, North Carolina, brought an 18-pound, 11-ounce limit of smallmouth bass to the weigh-in stage Saturday to overtake Andy Morgan of Dayton, Tennessee, and vault to the top of the leaderboard at the FLW Tour at Lake Cumberland presented by General Tire. Thrift, who has weighed 15 smallmouth totaling 51-8 over the first three days of competition, will bring a slim 7-ounce lead into Championship Sunday over second-place pro Morgan, who led the first two days of competition.

The showdown between Thrift and Morgan is an exciting rivalry for bass-fishing fans, as one of the two anglers has won the Tour AOY in four of the last five seasons. The duo have combined for more than $4.3 million in career earnings, are 1-2 for most career Top-10 finishes on the FLW Tour, and both frequently debated as being the best angler on Tour by their fellow anglers and peers.

Also still in contention are two-time The Bass Federation (TBF) Living The Dream package winner Allen Boyd of Salem, Indiana (3rd, 50-6), who weighed the largest limit of the tournament Saturday at 19-9, pro Greg Bohannan of Bentonville, Arkansas (4th, 49-9), whose limit weight has increased in each of the three days of competition, and Clent Davis of Montevallo, Alabama (5th, 49-5), the 2012 FLW Tour Rookie of the Year and the only angler to weigh a limit of at least 16 pounds each day.

“I caught a lot of fish today and had a lot of fun,” said Thrift, who weighed his 52nd consecutive limit in FLW Tour competition Saturday, extending the all-time Tour record. “The first two days were a bit of a struggle, but I went out today and caught 30 or 40. You never know when these smallmouth are going to quit biting, so I was just trying to catch as much as I could. I don’t know if they’ll bite tomorrow, but I’m ready to get out there and see.”

Although he has caught three small largemouth this week, Thrift has brought a limit of smallmouth to the scale each day and said that he hopes to do the same Sunday. He said that he is fishing three or four different moving baits slowly along a one-mile stretch of water.

“I’ve had a couple of good days, but I honestly still don’t know what these smallmouth are doing,” Thrift said. They’re scattered – everywhere. I’ll catch one on a point, then one in the back of a pocket. Then one out on the main lake, then one in a creek. I’m not covering a whole lot of water, I think I just found an area where fish live.

“Tomorrow I’m just going to go out there and do what I have been doing – fishing by the seat of my pants,” Thrift went on to say. “I’ll pull in somewhere and fish what looks good until it feels like I need to go somewhere else.”

The top 10 pros advancing to the final day of competition on Lake Cumberland are:

Finishing in 11h through 30th are:

Overall there were 150 bass weighing 445 pounds, 7 ounces caught by pros Saturday, All of the final 30 pros were able to bring a five-bass limit to the scale.

In FLW Tour competition, pros and co-anglers are randomly paired each day, with pros supplying the boat, controlling boat movement and competing against other pros. Co-anglers fish from the back deck against other co-anglers. The full field of 366 anglers competed in the two-day opening round. Co-angler competition concluded following Friday’s weigh-in, while the top 30 pros based on their two-day accumulated weight advanced to Saturday. Only the top 10 pros now continue competition Sunday, with the winner determined by the heaviest accumulated weight from the four days of competition.

The total purse for the FLW Tour at Lake Cumberland presented by General Tire is more than $930,000. The tournament is hosted by the Somerset Tourist and Convention Commission and the Burnside Tourism Commission.

The final 10 anglers will take off at 7 a.m. EDT Sunday from General Burnside Island State Park, located at 8801 S. Highway 27, in Burnside, Kentucky. Sunday’s final weigh-in will be held at the park beginning at 4 p.m.

Prior to the weigh-in Sunday, FLW will host a free Family Fishing Expo at General Burnside Island State Park from noon to 4 p.m. each day. The Expo is a chance for fishing fans to meet their favorite anglers, enjoy interactive games, activities and giveaways provided by FLW sponsors, and learn more about the sport of fishing and other outdoor activities.