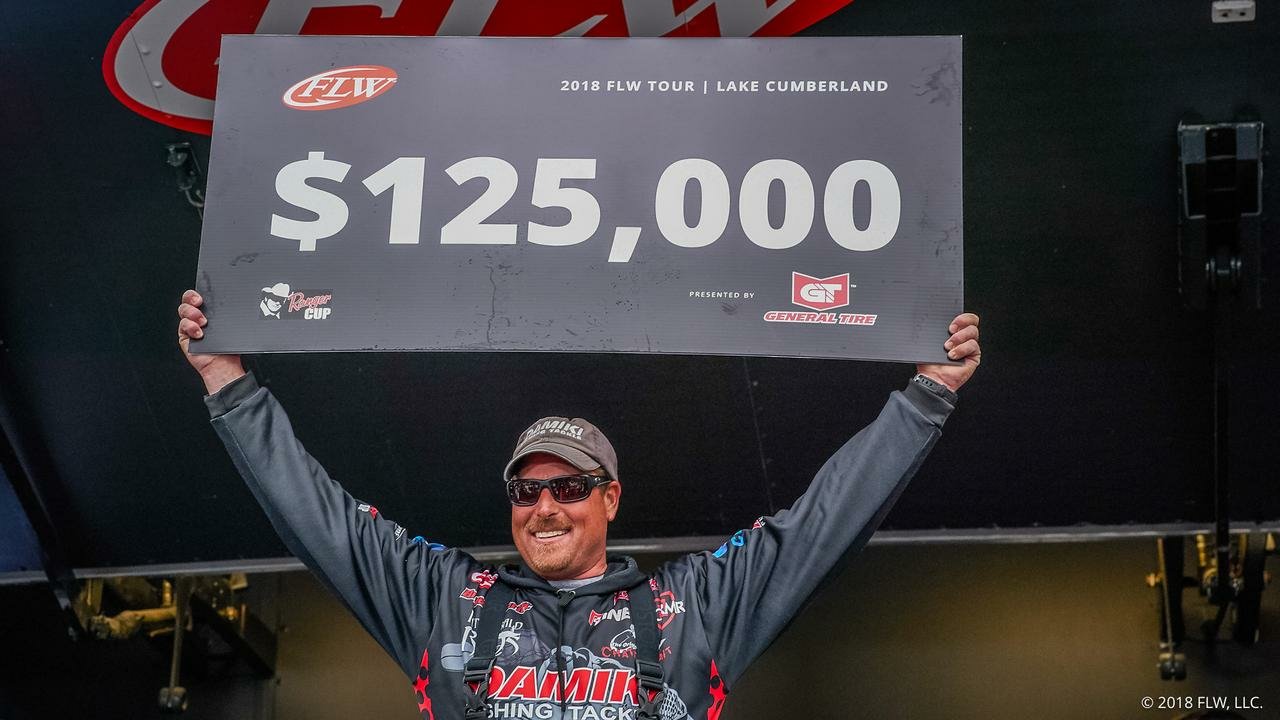 SOMERSET, Ky. (April 15, 2018) – Pro Bryan Thrift of Shelby, North Carolina, added to his ever-growing list of accolades Sunday, bringing another five-bass limit of smallmouth to the scale, this one weighing 18 pounds, 10 ounces, to win the FLW Tour at Lake Cumberland presented by General Tire and the top prize of $125,000 – his sixth career FLW Tour win. Thrift’s four-day total of 20 bass weighing 70-2 gave him the win by a 1-pound, 10-ounce margin over second place proAllen Boyd of Salem, Indiana, the TBF “Living The Dream” package winner who weighed 20 bass for 68-8 to finish second and earn $30,000.

“I’ve had a phenomenal week,” said Thrift, the reigning Pennzoil Marine Angler of the Year who moved into a tie for third all-time for most career FLW Tour wins. “I was starting down in Indian Creek and fishing my way back to Burnside each day.”

Thrift weighed in a limit of smallmouth bass each day by fishing points, bluffs, lead-in banks and the mouth of the creek. He credited his equipment setup as being the key to his win.

“I caught all of my fish this week on two main baits – a 3-inch Damiki Armor Shad (flash shad) and a 3½-4-inch swimbait (Tennessee shad),” said Thrift. “I used the Armor Shad when it was sunny the first two days. When it got cloudy, I started throwing the bigger swimbait. The Armor Shad is a more subtle swimbait.”

“I feel like the 8-pound line helped me get a lot more bites,” he said. “A lot of people don’t like using that light of line on a baitcaster, but you just have so much more control over your bait. I never lost any fish this week and the key was the combination of my rod, reel and line.”

Complete results for the entire field can be found atFLWFishing.com.

Overall there were 50 bass weighing 162 pounds, 15 ounces caught by pros Sunday. All of the final 10 pros weighed in five-bass limits.

In FLW Tour competition, pros and co-anglers are randomly paired each day, with pros supplying the boat, controlling boat movement and competing against other pros. Co-anglers fish from the back deck against other co-anglers. The full field of 366 anglers competed in the two-day opening round. Co-angler competition concluded following Friday’s weigh-in, while the top 30 pros based on their two-day accumulated weight advanced to Saturday. Only the top 10 pros continued competition Sunday, with the winner determined by the heaviest accumulated weight from the four days of competition.