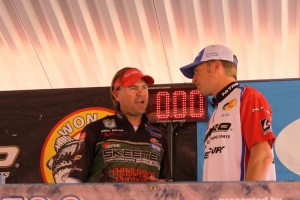 Las Vegas, Nev. – September 9, 2014 – Sometimes a little stumble is not as disastrous as one might think. Clifford Pirch, who presented a 15.49-pound limit to the scales on Monday’s first day was not able to keep the torrid pace that he came out of the gates with on day two. However, his daily weight that came in at around half of his first day’s weight was enough to keep him in the lead headed into the final day of the 2014 The WON Bass Nitro Boats / Mercury U.S. Open.

Pirch managed to produce only 7.48 pounds from Lake Mead today, but his lead; which had been nearly four pounds, still remains a steady two pounds over second place pro Zack Holwerda of Phoenix, Ariz.

Pirch said that he had planned to run new water, and made a decision to switch up altogether again in the morning. “I had an area in mind when I set out this morning, but then changed and decided to stay closer and I didn’t quite get the bites I thought I would,” he said. “The weather slicked off and we didn’t get the amount of breeze that we expected and it made the bite a little tougher for me.”

That doesn’t mean that the two-time U.S. Open champion is completely panicked. “I’ve got an area that was a key piece in my strategy for this tournament,” he said. “I haven’t gone to it yet and I’m pretty sure nobody else has found it. I’m going to go there tomorrow, and hopefully I didn’t leave too much room on the table today for someone else to sneak in.”

Holwerda managed to produce a 12.29-pound limit today to increase his total weight to 21.02 pounds; which vaulted him all the way to second place. He said the difference for him was execution. “I’ve been catching the quality fish here that I needed throughout practice, but yesterday I lost a few that mattered,” he said. “I’ve been able to duplicate this pattern over all of the different conditions we’ve had, but I like the calmer weather and I’m hoping that it will play into my hands tomorrow again.”

Brett Leber, who was in second place after day one slipped as well, but managed to stay in third place with a total weight of 20.37 pounds. he is followed in fourth place by U.S. Open rookie Doug Jones who had a 12-pund day himself and raised his total to 19.92 pounds. In fifth place is former FLW Tour pro Gabe Bolivar who pushed his weight to 18.88 pounds.

The final day of The WON Bass Nitro Boats / Mercury U.S. Open takeoff will begin at Callville Bay Marina on the shores of Lake Mead Wednesday with takeoff starting at 5:45AM Pacific Time. The final day’s weigh-in will start at 2:00PM. Following the event’s conclusion, a champion will be crowned at Boulder Station Casino the final evening of the event and will be broadcast live at 7:00PM.

Costa See What’s Out There Live event coverage will begin following tournament take off with hourly updates at 9:00AM, 10:00AM and 11:00AM each day, followed by weigh-in coverage beginning at 2:00PM and finally a 7:00PM post game show; all show times are Pacific Standard Time and can be viewed at www.wonbass.com.