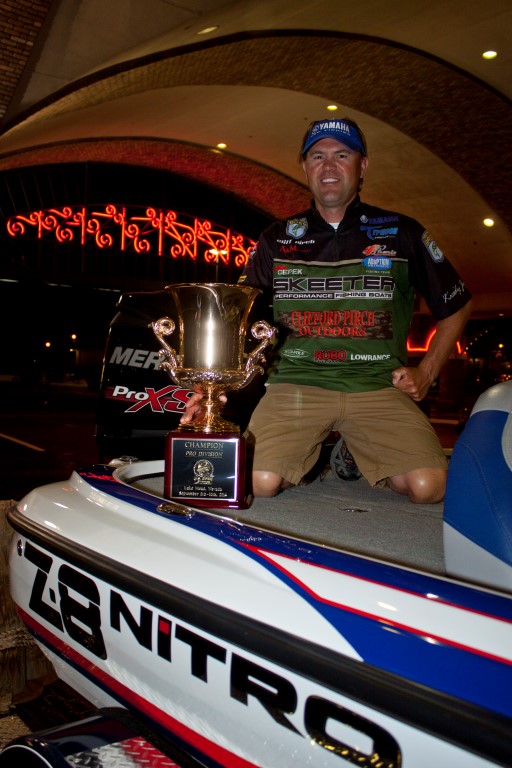 Las Vegas, Nev. – September 10, 2014 – It took landing a haymaker blow in the opening round, then dodging opponents punches for him to do it, but Clifford Pirch today claimed his third WON Bass Nitro Boats / Mercury U.S. Open victory. The win joins him with Mike Folkestad and Aaron martens as the only individuals to have won the West’s most prestigious bass fishing event a trio of times.

“I’m speechless right now, especially after being so close the last two years,” said the Payson, Ariz. pro. “I really didn’t think that I had produced enough weight to hold on, but it feels great to pull through, and I’m especially blessed to have been so fortunate to win this event three times; I’m completely humbled right now.”

Pirch opened the event by landing a giant uppercut to the field when he weighed in a 15.49-pound limit that gave him almost a four pound lead after the first day. He decided to play it safe in the second round and stayed closer to the Calville Bay takeoff area trying to conserve equipment and avoid disappointment by making a big gamble. That move resulted in a 7.80-pound limit that left the door open to competitors to overtake him. However, he entered the final day with a two-pound lead.

He decided to make a sizeable run to the back of the Overton Arm to target dirty runoff and debris that had resulted from upstream monsoons and flash floods. It was an area that he had saved for the final day, and it took a while for his bite to develop, but he connected with fish that had moved downstream and caught more than 25 keepers en route to an 8.19-pound limit that left him nervous.

But, one by one, his competitors faltered, and when the last two anglers who had the best shot to defeat him reported in with no fish; Pirch had won the 2014 WON Bass Nitro Bots / Mercury U.S. Open with a total weight of 31.26 pounds. The victory earned him a brand new Nitro Z8 / Mercury prize package valued at $37,000 and $50,000 cash.

He said he used three different techniques to claim victory. He reported dropshotting a Pirch’s Purple Roboworm on a Phenix M1 Drop Shot rod and culling out all but one of his early limit with a shad colored crankbait thrown on a Phenix X13 Cranking rod late in the afternoon on the first day. He returned to dropshotting again during the slick calm conditions of the second day, then turned to pitching his signature 1/2-ounce Clifford Pirch Outdoors Flippin’ jigs to hardwood cover in the dirty water on the final day with a Phenix Super Flipper rod. He alternated between black and blue and Clay Bank Orange colors tipped with soft plastic craws as trailers depending on the water clarity.

“It was a tournament where I had to do a lot of different things to produce the right bites; I had to change with the conditions,” he said. “I really wasn’t sure how it was going to turn out today, but I’m blessed and honored to have won this event.”

Todd Woods of San Dimas, Calif. held steady for most of the week and produced a total weight of 28.70 pounds to finish in second place. Third place finisher Gabe Bolivar; from Ramona, Calif. actually sat on the Costa Hot Seat as the current leader for nearly half of today’s weigh-in with 28.49 before being eclipsed by Woods. Dixon, California’s Brett Leber slipped one more place, but his steady showing over the three days earned him fourth place with 26.54. Finally, the top five was rounded out by two-time U.S. Open winner John Murray, who posted nearly a 10-pound stringer to move up from 25th place with a total weight of 25.80 pounds.

The AAA winner was Alex Centner of Gilbert Ariz. who teamed with pro partner Bobby Lanham from Cave Creek, Ariz. to produce the largest stringer of the event; a massive 16.06-limit that also included the big fish of the day. The performance was enough to catapult him from 39th place to victory. Centner will receive more than $10,000 and a St. Croix Rods prize package valued at more than $1,000

By virtue of being the highest finishing pro without a sunglass sponsorship; second place finisher Woods will receive the Costa sponsorship package which includes a full wrap, jerseys, 10 pairs of Costa Sunglasses and paid entry fees into the 2015 California Open at Clear Lake as well as the 2015 WON Bass U.S. Open. The package is valued at $10,000.

The WON Bass Nitro Boats / Mercury U.S. Open was hosted at Callville Bay Marina on the shores of Lake Mead, and the action was brought live via the Costa See What’s Out There Live event coverage at www.wonbass.com.