“When angler after angler — including three top pros in bass fishing — get excited after seeing the simple demonstration of these color-changing lures, you know we have some exciting technology that will make a huge impact,” said Sammy Lee, of the new Smartbaits™.

“As Smartbaits owners Leslee and Michael Dingman showed how quickly the soft and hard baits change in warm to cold water and how the baits’ red bellies appeared to be bleeding, I watched the amazed reactions of these name pros, all Bass Fishing Hall of Fame members.

“They called it industry changing,” said Lee with a smile.

“Fish see color,” said Michael Dingman, “and the unique chemistry in Smartbaits imitate wounded bleeding prey fish changing color at different water temperatures and depths. Predator fish, like large bass, hone in on those colors of vulnerable or injured smaller fish and attack. Smartbaits incite that attack. For example in cold deepwater or warm shallow water, just one Smartbaits lure will change colors from chartreuse to red or watermelon to junebug to attract more fish to strike. Color changes

everything; that’s the Smartbaits’ slogan.”

“They do catch fish and do exactly what they say they do,” added Lee, “and I’m amazed. This will be the biggest thing to hit the fishing world in years.”

Bass angling enthusiasts at the Classic get to see Smartbaits first, at booth 121

Anglers at the Bassmaster Classic Outdoor Expo, in Tulsa, Okla., Feb. 22 – 24, will see the new lures debuted even before tackle dealers and buyers for the big box stores do.

Normally buyers from all of the major fishing tackle and outdoor stores see the newest products the previous summer to begin selling them the following spring. But bass anglers visiting the Smartbaits exhibit at booth 121 in the Tulsa Convention Center will see them first. 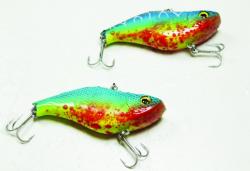 “It’s not only exciting to the pros and avid anglers but youngsters are just as fascinated as the adults by how the baits rapidly change colors,” said Lee. “It’s a great way to get them involved, by bonding in the outdoors and catching fish.

“I gave several of these lures to a friend with children in the 5- to 8-year old range and the youngsters were mesmerized at the color changes and wanted to go fishing right then,” said Lee. “They caught fish like never before and he was sold, plus he had two new fishing partners.”

“Color changes everything,” repeated Dingman. “We’re introducing 28 hard baits in jerk, crank and vibrating styles and 33 soft baits in a variety of worms, grubs, and swimming baits. Both soft and hard have a wide range of 15 popular color-changing designs and patterns. We also have glow-in-the-dark baits that last for eight hours and are reusable again and again.”

When the trio of legendary bass pros got a first look at the baits all three who are under contract with their own lure companies kept asking if they could get exclusive use of the baits. “These three gentlemen who have their own TV programs and who every bass angler knows were immediately hooked after they saw the very simple demonstration,” said Lee. “We were blown away with the responses from the pros and a number of retailers who saw it.”

“We’re planning baits specific to other species like walleye, bream and crappie,” added Dingman. “It’s an exciting fun product with a lot of ‘wow’ factor. We’re looking forward to the feedback we receive to these bass specific lures during the Expo. It’s neat to have something new to get anglers excited, after these past several years with the economy.”

For more information, go to the Smartbaits website at www.Smartbaits.net.