Dynamic – No Sandbagging in the Desert

You can count on it. No matter where the Bassmaster Elite Series tour stops, the top pros in the world will be quick to tell you how tough it’s gonna be. But that’s not the case at Lake Havasu.

Nobody is sandbagging here in the Mojave.

In fact, at the end of Wednesday’s final practice day, Gerald Swindle even posted a self-shot video from the water on his social media pages telling fans that not only was Havasu about the prettiest lake he’d ever been on, but that, “We’re gonna catch ‘em … the Elite Series pros are gonna show-out.”

Moments prior to Day One blast-off, Swindle’s opinion hadn’t wavered in the gusty morning winds. “I ain’t sayin’ we’re all gonna catch a 20 or 25 pound limit, but we’re gonna catch ‘em here in the Mo-Javie – yep, that’s right – I pronounce it Mo-Javie – you can quote me as pronouncing it that way – and there’s plenty of bass here,” grinned Swindle as he sat pulling a host of Quantum rods and reels out of his locker prior to take-off. 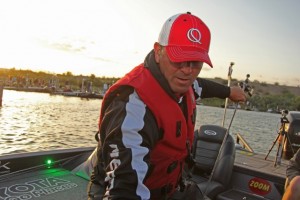 What Will it Take to Do Well?

“I’m guessing you’ll have to average 17 pounds a day to make Sunday’s Top 12 cut here, and you’d better average 14 pounds a day, on Day One and Day Two, to make a paycheck,” says Swindle.

Will Spawners Win?
“I don’t think so,” says Swindle. “Most of the bass here are done spawning, and those that are on beds aren’t going to be easy to catch. I’m guessing that only about 15% of the field will focus on catching spawning bass.”

“One thing that’s interesting about this lake, is that it’s one of the very few places we go that I think you’ll need a mix of Smallmouth and Largemouth to win,” says Swindle.

“Much the same, I don’t think you can depend on catching enough big largemouth out of the tulles or elsewhere for four straight days. Largemouth are going to get pressured hard, and used-up by this bunch over four days,” says Swindle. “You can win with primarily largemouth, but you’re likely gonna have to fall back on some Smallmouth to help you out over four days,” concluded bass fishing’s funniest man, and winner of nearly $2 Million in career prize money.