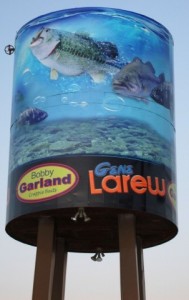 The Water Tower in front of Gene Larew Warehouse

TULSA, Okla. (Feb. 20, 2013) – With a 30th anniversary to celebrate and the Bassmaster Classic visiting this week in its hometown of Tulsa, Okla., Gene Larew Lures is all dressed up and ready for

bass fishing’s biggest party. The popular soft plastic lure company has a newly decorated sign out front, a brand new wall of fame inside, a remodeled packaging room and a specially created line dance named after one of its baits.

The water-tower-like sign in front of Larew’s 22,000 sq. ft. building has been overlooking a stretch of historic Route 66 on the city’s east side for years. Its new look of a large fish bowl with bass, crappie and baitfish brings back a retro feel of what used to be found in the way of signage up and down the famous highway. The sign also displays the company’s Gene Larew and Bobby Garland logos.

Inside the front lobby is a wall, 17 feet long by 12 feet high, that provides a pictorial look at the company from past to present. The collage includes some early day newspaper articles about the man who started it all, the late Gene Larew, as well as more recent images, such as Tommy Biffle’s proud moments in his Bassmaster Sooner Run victory on Oklahoma’s Ft. Gibson Lake.

Because of so many visiting bass fans to the Classic this week, Larew has scheduled two mornings in which it will provide factory tours of its manufacturing operation. On, Thursday, Feb. 21 and Friday, Feb. 22, the doors will be opened to visitors from 7 – 10 a.m. Participants will be able to see Larew and Garland baits being made and can check out the company’s new packaging room. Daylight Donuts and coffee will be served both mornings, and Larew souvenir Salt Craw packs handed out, courtesy of Larew and co-sponsor ONEOK, another Tulsa company and a leader in the 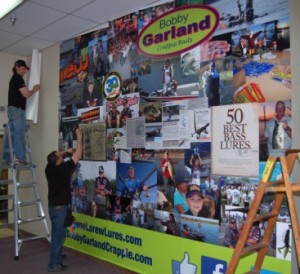 The Salt Craw was introduced to the fishing world 30 years ago, so to help with the milestone anniversary celebration, Bob and Lucy Spears of the Tulsa Country Western Dance Association (TCWDA) choreographed a newly created line dance called the Salt Craw Scoot. It contains a new move called the “crawdad.” More than 80 dancers have been practicing it to country artist Craig Morgan’s song, “Little Bit of Life,” in the TCWDA’s regular weekly classes for the past few weeks. The group will make a public introduction of the Salt Craw Scoot during a live concert by Morgan in Tulsa tonight, Feb. 20, sponsored in part by Larew.

The Salt Craw fishing lure got its name from the fact that it has salt cooked into its formulation. Larew was successful in patenting the salt impregnation process in soft plastic baits in 1985. Although the patent has since expired, salt injection remains an important part of Larew’s manufacturing process today.