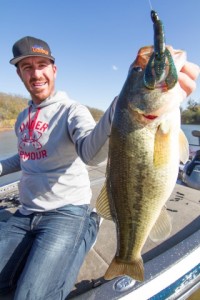 Jacob Wheeler with his New Gene Larew Punch Out Craw

Since 2011, Wheeler has punched, flipped and swum baits to amass more than $1,000,000 in earnings along the national bass tournament trails. He’s designed his Punch Out Craw for easy modification to cover these techniques and more.
No scissors or cutters are required, just the fingers to tear the lure’s body parts at score lines to make transformations, assuming something other than the out-of-the-package version is desired.
The Punch Out Craw is a “glide” bait in its original state, made with punching grass mats in mind. The large paddle-like appendage easily collapses to slip through the tiniest of holes in cover, and then resumes its shape.
The “flipping” version of the bait is achieved when its claws are separated at the anchor parts in the paddle. The spear-like tail between the claws provides stability.
Remove the spear tail at its score lines around the edges and the bait becomes a “flapping” craw. It can be fished alone or on a Biffle HardHead or such.
To create a “chunk” for use as a jig trailer or such, twist the lure’s body apart to leave only the head segment and keep just the claws.
When the bite is tough, Wheeler says the “finesse” version is his go-to choice. It’s achieved by leaving only the body and tail. He especially likes this shape when grass shrimp are present.

At full length, the Punch Out Craw’s body is designed to take a 4/0 hook. If shorter is desired, twist-off the end segment at the first bodyline and the remaining length is ideal for a 3/0 hook.

Wheeler’s Punch Out Craw is available in 12 colors, consisting of solids and laminates, and including Larew’s new Golden Junebug and Sooner Magic.
A re-sealable 8-count package of Punch Out Craws retails for around $6.19 each.
Wheeler, 25, surpassed bass fishing’s million dollar mark in short order with prestigious wins that included Bassmaster BASSFest in 2014, and FLW’s Forrest Wood Cup national championship in 2012 and BFL All-American Championship a year earlier.
To see the Punch Out Craw and Jacob Wheeler video on transforming his new bait, visit GeneLarew.com.