While Cherry is a rookie on the Elite Series trail, he has dominated regional pro circuits for over a decade.

Cherry took notice of Livingston Lures at the Sabine River Elite Series event, “I had heard about Livingston at the Bassmaster Classic, but never had the chance to visit their booth.  At the Sabine River event I got the chance to see fans react to their products, and I was impressed.  Then at the Falcon Lake event I had a chance to actually spend some time in their set-up. Again, the fans were excited about the baits and when I heard several customers talking about how much they liked the baits they had purchased on previous days, I knew I wanted to be a part of this team.” 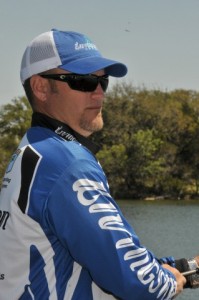 Cherry met with Livingston executives and the entire pro angler team at a Livingston retreat at Horseshoe Bay Resort 80 miles north of the Livingston’s headquarters. Cherry stated, “I met with the people of Livingston and saw first hand how the company cares about its products, it’s people and growing the sport as much as I do.  Myself and the rest of the Pro Team worked with lure designer Jerry Rago on the new Pro Series line of baits, which should debut at ICAST in July. It’s a very exciting time for Livingston Lures right now, and I am proud to be a part of it.”

Fred Battah, CEO of Livingston Lures is pleased to have Hank Cherry join the Livingston team. Battah said, “We observed Hank’s fishing skills, personal composure and stage presence at the Bassmaster Classic. Now that we have spent some time with him there is no doubt he is not only an exceptional angler, but a quality person with a high level of fishing intelligence. Hank will be a very valued asset and team member for the Livingston Lures Pro Angler Team.“

Livingston Lures offers a full line up of hard baits that have extensive technology built into them, including sound. Sound has quickly become a tool many anglers at all levels have started utilizing frequently. Cherry expressed, “From my experience on the water, sound is a valuable element in catching bass. Livingston’s sound and vibration technology is something I have already added to my tackle box.  Fishing against the best anglers in the world, I need all the advantages I can get.”