After a rocky start to his Elite Series return last week on the St Johns River, fan favorite Mike Iaconelli has quickly righted the ship with a strong showing here for the SiteOne Bassmaster Elite on the Harris Chain. The 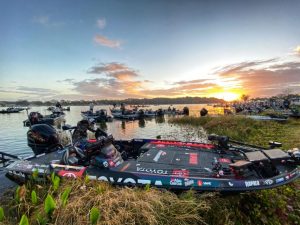 Team Toyota pro attacks the sport of fishing with his own unique style, which has drawn praise along with a bit of criticism throughout his career.

Iaconelli is well known for wearing his passion and emotion on his sleeve, so it was a bit of anyone’s guess to exactly how he would respond after his St Johns performance. But thanks to a fresh shave and short memory, Iaconelli rebounded in a big way on the Harris Chain.

“Florida tournaments have kind of haunted me throughout my career,” Iaconelli admitted. “I’ve learned the hard way you have to have a short memory in this sport. Earlier in my career, a bomb like I had last week would most likely have crippled me. One terrible event would have turned into two or three bad events, and you really can’t have that if you want to qualify for the Bassmaster Classic.”

Iaconelli doesn’t really credit a freshly shaved face for his quick turnaround, instead it’s the support of his wife and maturation thanks to over 23 years as a professional angler he believes helped him get his mind right for the Harris Chain.

“I know the best way to forget about a bad tournament is to have a good tournament,” Iaconelli said. “So while the rest of the guys were fishing last weekend, my mind was on this fishery. I re-rigged tackle, looked at maps, and refocused.

“And look, my wife Becky is a huge part of that. She gave me a pep talk after last week’s poor performance and that kind of support at home helps me focus on what I need to do.”

After a few years of away from Elite Series competition, it’s good to see Ike back to doing what he does best… competing at a high level and teaching the world to fish in the process. Iaconelli is back like a gypsy and is happy to tackle the new challenges that face him with this crop of Elite Series competitors.

Iaconelli’s goal coming into the Harris Chain was to leave here with a top 30 finish so he could hop in his Tundra for the eighteen-hour drive back to New Jersey in a good place. After consistently bringing limits full of three-pound bass back to the scales over the course of the first two days, he has put himself in a great position to do just that.

If he can one or two of the big bites that Florida is so famous for this time of year, Iaconelli may surpass his goal and have the Venetian Gardens crowd in Leesburg “Going Ike”.