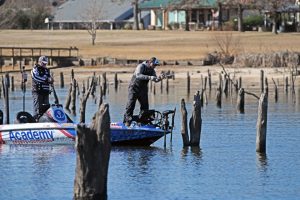 looked back. Wheeler caught 14 scorable bass totaling 56 pounds, 7 ounces to grab the early lead for Group A on Day 1 of the Toro Stage Two on Lake Fork Presented by Grundéns in Quitman, Texas.

The six-day event, hosted by the Lake Fork Area Chamber of Commerce, the Wood County EDC, the Sabine River Authority and the Rains County Tourism Board, showcases 80 of the top professional bass-fishing anglers in the world competing for a purse of $805,000, including a top cash prize of $100,000 to the winner. The tournament is livestreamed each day at MajorLeagueFishing.com and the MOTV app, and also filmed for broadcast later this fall on the Discovery Channel.

“Today has been a lot of fun,” Wheeler said in his post-game interview. “They’re not easy to catch, but when you do find some, it’s a lot of fun. This event is going to end up being all about decision-making.”

“The jerkbait was the name of the game for me, today,” Wheeler continued. “I was throwing them on a 6-foot, 10-inch medium-heavy action rod, using 12-to-14-pound line, depending on the cover I was fishing. I threw a various amount of jerkbaits, but my biggest bass this morning came on a (Rapala) Shadow Rap, deep. It was first thing – my third cast of the day.”

“We’ll see how it all ends up. Today was nice, but the rest of the week is a little different,” Wheeler said. “I’m going to take my day off tomorrow and regroup to come up with a gameplan on how we can win the round. The biggest thing this week is going to be about making adjustments, and I’m going to need to make some adjustments for Monday if I want to take it down.

Unlike Wheeler, who did his damage today on a jerkbait, California pro Ish Monroe caught his 13 scorable bass on a lipless crankbait.

“Congratulations to Jacob on a great day, but I’m right behind him – eight pounds on this lake is nothing,” Monroe said. “I fished hard, today, throwing a River2Sea Ruckus lipless (crankbait).

“Bradley (Roy) got an 11-pounder, which is awesome. Zack Birge got a 10, and that is awesome. But I plan on catching me a double-digit as well, so get ready.”

The 40 Anglers in Group A compete in their two-day qualifying round on Saturday and Monday – the 40 anglers in Group B on Sunday and Tuesday. After each two-day qualifying round is complete, the anglers that finish in 2nd through 20th place from both groups advance to Wednesday’s Knockout Round, while the winner of each group advances directly to Thursday’s Championship Round. In the Knockout Round, weights are zeroed, and the remaining 38 anglers compete to finish in the top 8 to advance to the Championship Round. In the final day Championship Round, weights are zeroed, and the highest one-day total wins the top prize of $100,000.

Anglers will launch each day at 7:30 a.m. from the Oak Ridge Marina, located at 2949 TX-154 in Quitman, Texas. Each day’s General Tire Takeout will be held at the Marina, beginning at 4:30 p.m. Fans are welcome to attend all launch and takeout events and also encouraged to follow the event online throughout the day on the MLF NOW!® live stream and SCORETRACKER® coverage at MajorLeagueFishing.com.

The Toro Stage Two on Lake Fork Presented by Grundéns will feature anglers competing with a 2-pound minimum weight requirement for a bass to be deemed scorable. Minimum weights are determined individually for each competition waters that the Bass Pro Tour visits, based on the productivity, bass population and anticipated average size of fish in each fishery.

The MLF NOW!® broadcast team of Chad McKee, Marty Stone and J.T. Kenney will break down the extended action on all six days of competition from 7:45 a.m. to 4:30 p.m. CT. MLF NOW!®  will be live streamed on MajorLeagueFishing.com and the MyOutdoorTV (MOTV) app.