Get to Know William Davis and Davis Bait Company 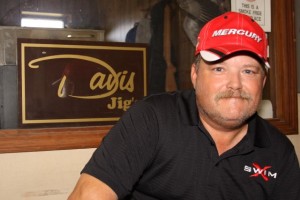 “I always get a special feeling when I catch a bass on something that I’ve made.  If we can put a smile on someone’s face because they catch a bass on one of our lures, I think that we are very successful.” – William Davis

The story behind the origins of Davis Bait Company really isn’t that unique when compared to those of other small tackle companies.  A local tournament angler starts creating custom baits out of his garage, beats up on the local competition for a few years, and then starts selling his wares to buddies who are tired of getting beat every weekend on the water.

From coast to coast, there are hundreds of one-man lure making operations headquartered from a workbench next to the lawnmower, weed eater, and last year’s Christmas decorations.  Many of these solo lure artisans have a small but dedicated following of local anglers who swear by the product, similar to groupies for a local rock band that never quite hit it big.

That’s where the story of William Davis and Davis Bait Company diverges from the path most often traveled by small lure companies. Over the past 28 years, Davis has been able to turn his lure company in East Central Alabama from a local legend into a nationwide success.

In the late 1970s and early 1980s, William Davis was working full-time at a paper mill during the week and turning some heads on the Central Alabama tournament circuits on the weekends.

Fishing primarily for spotted bass on the famed Coosa River chain, Davis and his partner were unsatisfied with the quality of the lures and hooks they were using.

“I couldn’t find a tackle company that was using premium hooks and components on all their baits,” Davis remembered.  Frustrated at the lack of quality available in the lure market, he partnered with a friend who had some machinery and started producing spinnerbaits and custom jig heads that met his standards.

It was during this stretch where Davis tweaked and perfected what he considers today as his trademark product – the Shaky Worm Head. “We started out using oversized crappie jigs with a grub 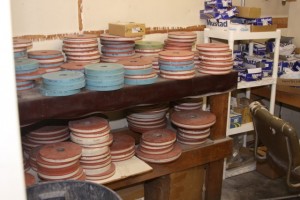 and one day we ran out of grubs so we put a straight tail worm on the jig head and started getting more bites,” said Davis.  “I spent a lot of time at the drawing board trying to create a bigger and longer hook to use in a lighter jig head.”

Though the process took several years, Davis, who was manufacturing his baits one at a time in his Alabama garage, finally settled on a hook that was sharp enough to be fished effectively on light

line.  “For the next few years we never told anybody how we were catching our fish,” he explained.

Davis also began building heavy spinnerbaits featuring a hook that flexed at the head to reduce torque and increase his strike-to-land ratio. The lure was aptly called the “Flexx Spinnerbait.”  While several lure companies currently offer a hinged or movable hook, Davis was the first one to actualize the concept.

Word slowly started getting out that Davis and his tournament partner were winning tournaments on baits that he was making in his garage.  That’s when Davis’ phone started ringing. “People were calling me every weekend and just wearing me down to make them some baits,” he laughed. “I can remember thinking, ‘Well, at least I may be able to cover some of my fishing expenses by selling lures.’”

His answering machine wasn’t the only thing that was full.  After designing, pouring, finishing, and packing each individual lure from his garage for three years, Davis started running out of room.  “It got to the point where you couldn’t even walk through my garage,” he said.

It was time to move.

Full Time Job
Over the next fifteen years, Davis expanded the lure company, which was called Pro Line Bait Company until 1990 when Davis bought out his partner and became the full owner, renaming it Davis Bait Company.

After outgrowing a 10×20 building and a 30×30 building, in 1999 Davis Bait Company finally relocated to a 17,000 square-foot facility in Sylacauga, Alabama, where the factory remains today and produces more than 9,000,000 baits annually that are distributed across the country and in Japan.

The final move prompted Davis to make a move of his own.  Giving up his job at the paper mill, he jumped head first into the lure-making business, going full time with Davis Bait Company. Davis said that the business decision was based more on family than anything else.  “It was one of those deals where I was working 16-hour days 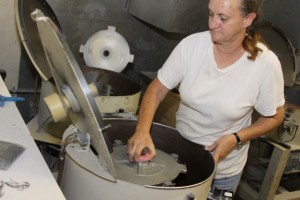 at the mill and trying to make my lure business work at the same time,” he explained.

“In all honesty, I started doing this full time so I could spend more time with my son, Will, who was in grade-school at the time,” he said.  An avid competitor in shooting sports, Davis was able to accompany Will across the country for competitions.

While the ability to dedicate more time to his family has been a welcomed addition, running a tackle company doesn’t exactly qualify as “easy work.” Even after 28 years in the lure-making business, running the company is a never ending challenge.  “When I started the business full time, I quickly realized that in order to stay in business, I had to make a profit.  I think a lot of small lure companies get into trouble because it just seems like a fun business,” he stated.

Sweat and Blood
If the average angler knew how much hard work went into making each lure, they’d never break off.  They would try to retrieve that bait…every single time.”

The conviction in Davis’ voice was unmistakable as he voiced the above statement, pausing before the final three words for added emphasis.  “There’s a lot of sweat and blood that goes into this stuff,” he continued.  “Most fishermen have no clue about how many times a bait is actually touched before it goes in the package.”

Davis said that his signature Shaky Worm Head is touched at least 11 times before it reaches the consumer.  “And that’s just a simple shaky head,” he said with a chuckle.  His custom spinnerbaits are touched no less than 25 times and feature between two and five different colors of paint on the head of the bait alone.

Davis can rattle off how many times each specific bait is touched before it leaves his factory, and with good reason.  Chances are that at some point, the bait passed through Davis’ hands. Even though he currently has five full-time employees and in the past has had as many as 26 employees, he still takes an aggressive hands-on approach to running the business.  “I do everything from take out the garbage to pay the bills,” he said.

While he enjoys the challenge, Davis said that running Davis Bait Company is a never ending job.  “I’m thinking about it 24/7,” he said.  “Almost every employee that I have right now has been with 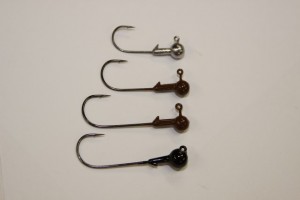 me almost since the beginning, so they’re a big help.”

When he’s not at the factory, Davis can often be found testing and perfecting his newest creations on the crystal clear waters of Lake Howard, a small lake in Sylacauga located just seven minutes from Davis Bait Company’s headquarters.

Davis estimates that he spends well over 500 hours a year developing, tweaking, and perfecting each bait that goes into production.  It’s a labor of love that allows Davis to be confident that he’s offering anglers the best possible lure.  “I’m proud of everything that we make here and we’ve never had what you would call ‘a bad dog out of the bunch,”’ he stated.  For example, before it’s packaged, each handcrafted Fishco crankbait that goes through Davis Bait Company’s doors is tied on the end of a line and tested to ensure that it’s running correctly.

“I think the fact that a fisherman can grab one of our products off the shelf, take it out of the package, and catch a fish on it without really having to tweak it or change it, has really helped with our business,” said Davis.

The Pro Effect
One of the benefits of owning a tackle company that produces baits that have accounted for over 1.5 million dollars in tournament earnings is the ability to rub shoulders with some of the best and brightest anglers in the professional ranks. 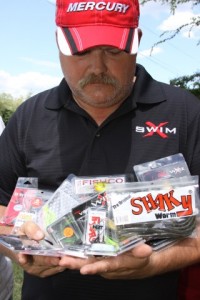 In addition to an Ambassador Staff at the local and regional level, Davis has had several Elite pro staff anglers.  Working along side Elite Series pros is a dream come true for Davis, who still fishes around 20 local bass tournaments a year.  “When I first started out, I never fathomed that this would happen,” he admitted.  “It’s hard to describe the feeling when guys who have won millions of dollars want to help a small bait company like mine. They’re truly dedicated to helping us create products that fit the needs of the anglers.

“Without these professional anglers and the Ambassador Staff helping with the promotion of the baits and getting the word out, it would be really hard for us to stay in business.”

The Future
Looking ahead, Davis is cautiously optimistic about the future of the bait company that started out in his garage nearly three decades ago.  While the recent economic downturn has slowed production, he is confident that Davis Baits will remain a staple in the industry.

“If we can maintain where we are right now until the economy picks up, I feel like I’ve done what I need to do,” he explained.  “Everything that we make has high quality hooks and components that tournament anglers demand.  As long as there are bass tournaments and tournament anglers, we’ll be alright.”

Counting on quality and reliability for longevity in the industry is nothing new to Davis. Even though Davis Bait Company is currently working on new designs and offers custom crankbaits, topwaters, spinnerbaits, and jigs – Davis’ original Shaky Worm Head still remains a best seller after 26 years.