Dynamic – Ike on “The Rock”

Locals proudly call this cedar-lined 43,100-acre reservoir in The Ozarks – “The Rock” – and for Mike Iaconelli it sets the stage for an unavoidable pun.

After a 75th place finish at Seminole, and a 64th on the St. Johns, he finds himself between “The Rock” and a hard place in the Toyota Bassmaster Angler of the Year standings as he and the other Elite Series pros practice on Table Rock today.

Will this be the tournament where Ike turns around his 2014 season? “I’ve had good finishes here, and I’ve had bad finishes here, but most importantly this lake holds one of the greatest memories of my career and life, because this is where we were the day I won the 2006 Angler of the Year title,” he gratefully reflected. 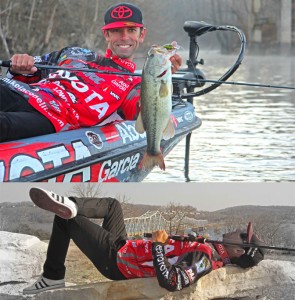 So leveraged by positive memories delivered here eight years ago, Iaconelli is breaking “The Rock” into thirds. “I’ll practice the lower end one day, mid-lake the next, and the upper end as well, until I get a feel for where I’m getting the most bites and gaining the most confidence,” says Ike of an approach that Rick Clunn has long professed to figuring out any large reservoir, and Iaconelli now teaches in the Bass University courses he hosts.

“The cool thing about Table Rock is that it patterns really well, so if you figure something out in practice, you can usually apply it throughout the competition days,” explains Ike, who is optimistic that the fishing will be really good this week on a sometimes-stingy Table Rock. He’s guessing he’ll need to catch an average of 15-pounds a day to make the Top 12 cut here.

“It’s early April but it’s been such a harsh winter that the water temps are still in the 40s and nature is behind its normal schedule, so I’ll approach this more as a pre-spawn tournament than the bed fishing tournament it might normally be,” says the Runnemede, NJ pro, with more than $2 Million in career prize winnings to his credit.

With bed fishing mostly ruled-out, Iaconelli says he’ll rely on Rapala’s DT crankbaits, as well as a no-longer made, hard to get, series of vintage Wiggle Warts that sell on eBay for about $50 a piece, plus a Berkley Beat Shad swimbait, and of course, the Shaky Head that has served as a productive security blanket over the many successful years of his pro career.

Perhaps the most important tool he’ll have on-board this week will be a list of notes he’s written to himself with a Sharpie and taped to the inside of his windshield. Mental reminders to not rule-out anything, to aggressively fish everything the day will allow, and of course, to Never Give Up – especially when caught between a rock and a hard place.