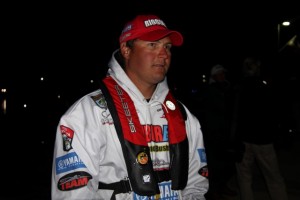 One of the more frustrating occurrences in bass fishing is working really hard for that bite you need, only to miss the fish, or have the fish short strike you. While many people tend towards showing their frustration and stomping around the boat while exclaiming some choice words; there is another tact to take.

Instead of throwing a hissy fit, learn how to coax them into striking again. Instead of screaming at the stupid fish, learn the methods to rekindle their desire to strike. Just be like the 1970’s era soft rock band Player and sing, “Baby Come Back!”

Well, technically, while he doesn’t actually sing the lyrics of the song (although if you know him, he might actually do it now) he has a system of follow up approaches that help turn missed opportunities into results.

“I’ve found a way to be able to get 60 to 70-percent of the fish that swing and miss strike again,” he said. “It all revolves around being observant and having something that complements what I was throwing first.”

When to Throw Back
Crochet is quick to point out that he realized that not every fish that struck and missed was not going to be a target for a comeback bait. “If I get a hook into the fish at all, he’s not likely to hit anything for a while,” he said. “If I hook and lose a fish, that one’s not going to bite again either. But, a fish that short strikes, or one that swirls on a lure and misses is one that can be caught.”

To accomplish that task, Crochet starts by going through a set of mental checklists that help him quickly decide whether the fish is one he can get to strike or not. He said that he has learned to identify where a fish is, how aggressive it is and what lure he needs to throw in order to catch it. 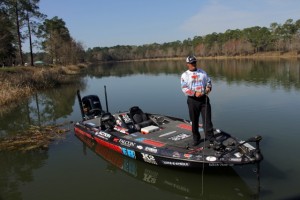 “I stat by trying to have a complete mental picture of the bass’ location,” he said. “Then I look at how the fish tried to take the lure, and finally, I try to be a quick as I can without being inefficient.”

Visualize and Respond
Crochet tries to give himself a clear picture of exactly where the fish was positioned so that he can make a cast that gets to the fish quickly. “I want to see how the fish was relating to cover in my mind so that I can try and make the right presentation on the next cast,” he said. “You don’t have a lot of time to do it, so you have to think quickly.”

Secondly, he tries to be prepared with a complementary offering that he can get back in there quickly. “Sometimes it will be the same lure, sometimes a different one,” he said. “But, I try to be back in there quickly because I think you have less than 10 seconds to make sure the interest of the fish is still there.”

He does that by being prepared. 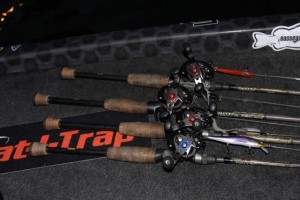 Prepared for the Comeback
Like any pro is with their gear, Crochet’s Skeeter is chock full of Falcon Rod / Ardent Reel combos. However, one thing he always does is have lures at the ready that are different, but similar to what he was originally fishing that he can throw back.

“If I am fishing a Humdinger buzzbait, I might have a Humdinger spinnerbait ready. If I’m fishing a Chatterbait, or a Luck-E-Strike Rick Clunn RC2 Squarebill crankbait, then I might have a swim jig ready. If I’m frogging around heavy cover, then I have a Hunny Bunny Baits Bucket Stick ready or a Texas Rigged punching bait like a Hunny Bunny K2 Craw rigged with a 1.5-ounce Reins Tungsten punch weight,” he said. “I judge how the fish took the lure and decide whether to throw the same lure or the backup bait back at ’em.”

He said that he likes to have the lure hanging off of the rod tip at the side of the boat, but that it isn’t always prudent with as many rods as they get on the deck. But, at a minimum, the backup lure is clipped to the top of his reel so that he can quickly pick up and make the next cast.

Deciding What to Use
Selecting what lure to throw back in is decided by the fish. If the lure strikes aggressively at a bait such as a topwater lure but misses, he will throw the same lure back in there. If a fish is very subtle in its attempt to take a lure, then he opts for the backup.

“I think the aggressive fish are sitting there looking around for the thing they missed, and if it comes back again, they typically strike it again,” he said. “But, a fish that nips at a lure might be cautious, so by switching up, they often strike at the back up presentation.” 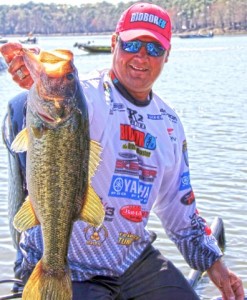 Mechanism of the Follow Up
Because this mop up attempt requires speed, Crochet offered some advice to try and help anglers be proficient. “You obviously need to get the lure out of the water so that it can’t get in the way,” he said. “So, in the case of a frog, I wait to make sure the fish isn’t coming back by making a couple subtle twitches,” he said. “I rip the frog out by almost making a hookset that clears the frog over the boat, I then leave that lure there and pitch back in the K2 Craw or Bucket Stick.” Other lures like a crankbait, buzzbait etc, he speed reels out of the zone and makes another presentation.

For crankbaits, he said he often throws the same lure in, but varies the retrieve. “I will speed reel the crankbait into the strike zone and then twitch it like a jerkbait in place for a second,” he said. “If that doesn’t work, I may try another color crankbait or switch to the swim jig.”

Final Thoughts
Crochet is quick to point out that even missed fish can be successes on the water. “Try and remember the big picture,” he said. “What we are trying to do is establish a pattern each day. While we want to catch everything that bites, even those fish that we miss can rat on their friends and give us valuable information towards establishing a pattern.

“Give yourself a chance and be ready for the comeback presentation, but see every strike as valuable and you can start improving your catch ratio,” he said. “This method helps me on the water, I bet if you take a little time and figure out what works for you, you can catch more fish too.”