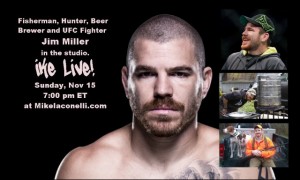 Miller, known for bringing “a greater level of thrills on a greater level of regularity,” has taken down some of MMA’s best, including Joe Lauzon, Danny Castillo, Marc Bocek, Gliesen Tibau, Charles Oliviera, and Kamal Shalarous. Of 32 bouts, Jim has won 25.

Outside the ring, Jim Miller is a “Hands On” kind of guy—in fact, that’s the name of the realty show he and Dan, also an MMA fighter, are shopping to the networks. In it, the brothers hunt, fish, camp, cook, build things, fix things and brew beer.  Jim fishes in the lakes around his New Jersey home, hunts with a homemade longbow, and runs a gym (again, with his brother).

Jim and Mike talk about family, fishing, fighting, and Jim’s grueling schedule as he trains for his upcoming fight with Michael Chiesa on December 10, 2015 at UFC Fight Night 80 in Las Vegas.

Audio of the show is available for free on iTunes. Enter TinyURL.com/IkeLiveiTunes into your browser. To subscribe to automatic downloads, click “View in iTunes” and choose iTunes as your application. Click “Subscribe” and new shows appear in your iTunes library automatically as they become available.

Ike Live! fans receive email reminders for the show when they join the Ike’s Fish Heads Nation at MikeIaconelli.com , and they can opt to receive the monthly newsletter, links to videos and periodic discount offers. Clips of the show are available on YouTube at Going Ike and via YouTube subscription.

A South Philadelphia native now living in South Jersey, Mike Iaconelli fell in love with fishing at his grandfather’s side in the Pocono Mountains of Pennsylvania. He began fishing in tournaments after high school, joined the pro-am circuit in 1992 and turned pro in 2000. In 2003, he won the Bassmaster Classic. He is the only angler to win the Bassmaster Classic, Bassmaster Angler of the Year and B.A.S.S. Nation Championship.

He and wife Becky run The Ike Foundation®, which provides fishing equipment to youth fishing clubs to “get kids fishing.” In addition, he and fellow fishing champ Pete Gluszek run The Bass University, which offers intense 2-day fishing classes and on-the-water experiences that bring avid amateurs and professional fishermen together.